Spur Award-winning Western writer Gary Svee was born to be a cowboy. But maybe he was a century too late.

His fiction — such as Sanctuary, hailed as 1990’s best Western Novel by the Western Writers of America — often takes you back to an earlier time, when men rode horses, wore six-shooters, and traversed the sagebrush trails.

Gary shrugs at the description. “I write about Montana. I guess that makes me a Western writer, but I don’t know what that means. It reminds me of a reviewer writing that one of my books is an allegory. I had to look up ‘allegory’ to understand what I’d done.”

True to form, his original short story in this issue has a Western setting, but it’s actually set in the 1950s. And it’s a poignant Christmas story, not a blazing shootout in front of a corral.

“I stepped outside Montana in the books I read,” he says, explaining how he came to write this particular story. “And that led me to step outside a world with signs on saloon doors, ‘No dogs or Indians allowed.’ That’s what drove me to write ‘Henry’s Christmas,’ a Native American mother trying to shield
her son from the hatred that palled the Big Sky in the earlier years and resists closure.”

How did he come to be a writer? “I was raised in a family of storytellers,” he grins. “Stories feed stories, like the time a man shoved a pistol into Dad’s back and said, ‘I’m going to blow your guts out.’ When the assailant woke up, he was in jail. My big brother fly-fishing the Madison with a rattlesnake wrapped around his leg.

Going down a talus slope with my younger brother, hoping we would make it across before we went off the cliff at the bottom. Tough, soft, mean, glorious, bright, dim, people set like gems in a setting of sego lilies and dizzying mountains and sunsets that shade any artist’s palette. How could anyone resist writing?”

His mentor was Dorothy M. Johnson (1905-1984), known for such classic Westerns as The Man Who Shot Liberty Valance, A Man Called Horse, and The Hanging Tree. Many of her short stories were published in the Post back in the ’40s. Svee says, “She was a premier Montana writer, my teacher at the University of Montana School of Journalism, and a friend.”

Gary Svee serves as a fiction advisor to the Post, feeding us ideas, critiquing our selections, and helping us to keep you entertained.

Does he have more Montana stories to tell? You bet. “I’ve been mired in a screenplay,” he reports, “but short stories keep popping into my head.” We’ll share them with you from time to time. 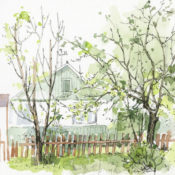