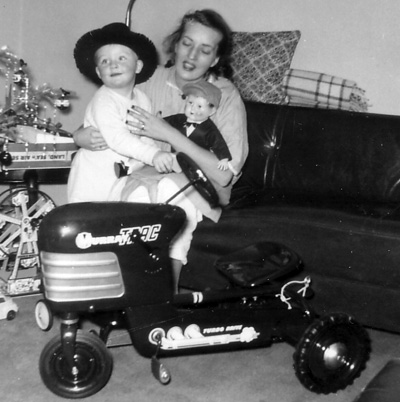 It was 1962. We lived in Ohio in a working class neighborhood. Dad was out of work—again. His most recent job as a fund-raiser for a democratic candidate ended after the man running for governor was defeated. The defeat was not a narrow one. And Dad’s unemployment checks were not enough to pay rent and put food on the table for a family of four.

Here sat the O’Malleys on a Sunday morning. My little sister, Annie, was sick with tonsillitis, Mom was mad at Dad—whose name was also Dan—for making inappropriate employment choices, and I was running late for a conscripted appearance in the Pope Pious X boys choir at St. Mary’s Catholic Church, as directed by the very eccentric Sister Marion.

“Dan, Danny’s going to be late for Mass and here you sit, all hung over and no job,” Mom said very sternly to Dad, who liked drinking. “At least you could have the decency to get out of that chair and take the boy to church. It wouldn’t hurt for you to go inside the church either.”

Dad looked at me with a painful squint in his eye, and said out of the corner of his mouth, “Son, why don’t you go to Mass yourself today?”

“Take the boy to church, and you go to Mass, too, and I want to know what the sermon was about—now go!” Mom screamed at the top of her lungs.

Dad never said a word, cross or otherwise, on the way to Mass. Usually, he stood in the back of the church and went outside when the priest gave his sermon. This time I saw him sitting halfway toward the front listening intently as Father Connelly implored the congregation to give more money.

The inviting aroma of Mrs. O’Malley’s usual Sunday dinner of roast beef and mashed potatoes greeted us upon arriving home from church.

“I said five rosaries while you two were gone. Annie’s temperature is down to 99, Dorothy (Mom’s sister) called, and Jack got a promotion, dinner’s almost ready, Danny, you go change your clothes, and Dan “Mr. I Want To Raise Money for the Governor,” you can help me set the table if it wouldn’t be too much trouble,” Mom said in her special way.

Sunday dinners were usually pleasant in our house. This one wasn’t. Between passing the peas, mashed potatoes, and serving delicious homemade apple pie, Mom verbally threw everything but the kitchen sink at Dad. His work habits, drinking habits, personal hygiene, and things I didn’t understand were tossed across the table. Dad, to his credit, kept his steely World War II veteran cool and casually defended himself. I just kept eating through the Hannah and Dan bickering show.

Dad had a special way of pushing Mom’s buttons. After dinner, when her 25-minute nonstop rapid-fire tirade came to an end, Dad said coolly, “That was one of the best conversations I’ve never had with you. Dinner wasn’t bad either.” He flipped his napkin on the plate and slowly walked out of the kitchen.

Since my little sister was sick in bed, I helped Mom with the dishes. She mumbled to herself the whole time. Even at the age of 9 I could tell her mental wheels were spinning rapidly.

Dad had his face buried in the Sunday paper as Mom regally entered the living room.

Dad looked at her over the top of his paper as if he heard something, but wasn’t quite sure of what he heard.

Our family had a distant connection with the Kennedy administration. My grandmother was a grammar school classmate of President Kennedy’s mother Rose. My grandfather was the local ward boss during the Kennedy for Congress campaign. My father served in World War II with JFK’s family bodyguard, John J. “Mugsy” O’Leary. My mother, along with 150 other women in our neighborhood, had lunch one day with Jackie Kennedy. That’s what I knew about our family Kennedy relationship.

My dad dropped the paper on the floor.

“You’re what?” he said as if he wasn’t hearing properly.

Before he had a chance to utter another word, Mom was on the phone. This was back in the days before direct dial long distance.

“Operator, I’d like you to connect me to the White House in Washington D.C., please,” she said in the sweetest honey coated voice I had ever heard.

My dad had an “I really can’t believe you are doing this to me” look on his face as Mom sat there and smiled a Jack Nicholson “Shining” smile at him while the call was going through.

“Hello, White House? Hi, this is Hannah O’Malley calling from the O’Malley’s formerly of Clinton, Massachusetts, how are you? I’d like to see if Mugsy O’Leary is working today,” Mom said to the White House operator as if she’d known her for years.

Dad’s eyes were rolling back in his head. His face was flushed. He was embarrassed beyond belief. Men’s wives don’t usually call the White House to beg favors from old Army buddies or the President of the United States on a Sunday afternoon.

We all sat silent. Mom was on hold with the White House. Cool; I thought. The operator must have told Mom she was going to put her through to someone because she said a very sincere, “thank you, honey”.

“Hello? Well, hello, Mugsy. Yes, this is Hannah. How have you been? We’ve been reading about you. Oh Dan? Dan’s fine, except he’s temporarily out of work. He had applied for a Federal Marshal’s job, but it looks like someone else is going to get it. They told him Friday he was out of the running. They? I guess it was the head Federal Marshal. I don’t know. Here I’ll let Dan tell you all about it”.

Mom thrust the phone at Dad with an all-powerful glance of “don’t screw this up,” as she handed it to him.

“Mugsy!” Dad said with confidence in his embarrassment. “Mugs, we’re doing fine; just a little setback. Well of course I wanted the job, but it’s too late now. They’re going to announce the guy’s appointment tomorrow. Sure; I’ve got time.”

I sat in wonder watching my Dad talk to some guy named Mugsy who worked at the White House for President Kennedy who Mom called after Sunday dinner because she was mad because Dad hadn’t gotten a new job yet.

Dad suddenly looked as if he had been struck by lightning. He sat bolt upright in his chair.

We all sat straight up. Now my mom looked as if she too had received an electric shock.

“Yes, Mr. President, my mother was Annie O’Malley. Yes, I’m John E’s son. Yes, Jack O’Malley of B.C.’s my older brother. Yes, I was in France and England with Mugsy.

“With all due respect, sir, don’t believe everything Mugsy says about me. Well, Mr. President, basically I applied for the Southern District Federal Marshal’s position and was informed that I’m no longer a candidate. Oh, yes sir, I certainly feel I was the best man for the job. Thank you very much, Mr. President. (pause) Mugsy! What’d you do that to me for? For gawd sakes; the President didn’t need to hear my troubles. Okay. Okay. Yeah. Okay. We’ll hold tight.

With a blank look, Dad got up, walked around Mom, and gently put the phone back on the hook.

We were all silent. Mom was the first to speak.

“Honey, what did they say?” she asked.

“You heard it, I was telling Mugsy about not getting the Marshal’s job. He happened to be in the same room as the president. Mugsy put me on hold and told Mr. Kennedy who I was and where I was from. Next thing I know I’m talking with the man. He remembered Mother going to school with his mom. He said my mom was a childhood friend of hers. He said he also remembered Daddy from his congressional campaign and knew brother Jack from following B.C. football. What a memory! He told me Mugsy often talks about me from our days overseas. Then he asked me what happened and if I thought I was the best man for the job. Then he said, “We think you’re the best man for the job, too.” Mugsy gets back on the phone and then tells me to sit tight and wait for a phone call. Hannah, if this thing comes through, oh baby,” Dad said out of breath.

I jumped up to run out and tell all the kids in the neighborhood that my dad just talked to President Kennedy. Mom had other ideas.

“We’re all going to sit here and pray until someone calls us back,” she said piously.

Dad picked up the paper and buried his face in it. Mom got out the rosary beads. We prayed while Dad read the sports pages.
Several hours later the phone rang. Mom answered it.

“Hello, this is the O’Malley residence. Yes, this is Mrs. O’Malley. Yes, Mr. O’Malley is right here. I’ll get him for you. It was nice talking with you, too,” she said.
Mom handed the phone with a smile on her face to my father. It was the head United States Federal Marshal.

“Oh, hello, Mr. Howard. Fine, sir. I’d be honored to have the position. Yes, sir. I’ll be in your office at 8:30 sharp. Thank you, sir,” Dad said in the most serious and professional manner.

The phone rang again several minutes later. It was Dad’s friend from the White House, Mugsy. He called to ask if Dad was offered the Marshals job and if he accepted it.

Dad enthusiastically told him he was offered the job. Mugsy told my Dad that the head Marshal had made a mistake and it was Dad who they wanted all along, per the United States Department of Justice. The President had called his brother Bobby at home, Bobby called the Justice Department, the Justice Department called the head of the United States Marshal Service, and the head of the Marshal Service called the Marshal in Ohio to inform him that he had the opportunity to do a favor to his country by appointing one Dan O’Malley to the position of United States Marshal, Southern District.

“Mugsy, how can I thank you for what you did for me?” Dad asked.

“You can’t. You can thank your wife. She’s the one who made the phone call,” he said.

The next day, my dad’s picture appeared on page two of the local paper with the small headline, “Local Man Chosen for U.S. Marshal.” The article went on to mention how Marshal Fred Howard was proud to have found such a champion of justice and war hero to fill the void in that tough territory known as Southern Ohio and Western Pennsylvania.

Marshal Howard was fortunate to have found exactly everything they were looking for in a candidate.

On Sunday, Dad’s broke with no job. On Monday, his picture is in the paper; he’s the new Marshal—all because Mom decided to call the White House. Behind every successful man is often a woman like my mother.

—“Both my parents passed away in 2005, just a few months shy of being wed 57 years,” says author Dan O’Malley, now a successful businessman. “This is my tribute to what would have been their 65th wedding anniversary.”