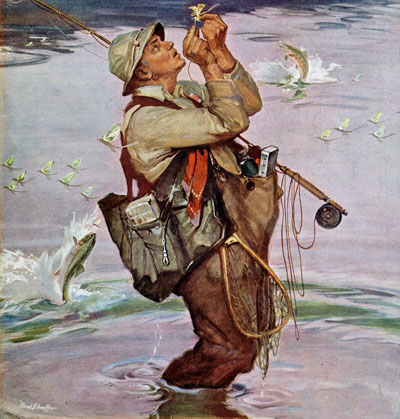 There is more than one way to catch a fish, and every one of them is easier than fly-fishing. In the end, though, no other style is more fascinating or spiritually satisfying than catching one on the fly.

Why else would people dedicate so much time learning how to cast a fly rod or tie a fly? Only something that is truly enjoyable would justify going to the effort of studying the life cycle of insects or the diet patterns of fish.

Fly-fishing requires mastering arcane skills and plenty of patience. But, it also offers the chance to embrace nature in a way unlike any other.

Neophyte fly-fishers face the basic challenges of learning the equipment and prey. But what begins as a pastime soon becomes a cause, as these men and women pursue their new passion with large amounts of time, effort, and resources. They are, in fact, starting an endless quest.

In the midst of learning new tactics, they often discover a rare sense of accomplishment. The pursuit is so intriguing that even days of little or no success on the water can be filled with enthusiasm and an eagerness to return.

In a 1958 Post article, Corey Ford describes the peculiar pleasures he found in fly-fishing.

“His satisfaction lies in dropping cocked at the head of run, and watching it ride back down the swift current, bobbing lightly over a riffle, gliding around a boulder; reversing its course and halting poised for an instant in a back eddy under the bank. If a trout happens to share his enthusiasm for the fly, well and good. The angler plays his adversary on a taut line until the fish is exhausted, and leads it carefully to shore. Then he kneels beside it and grips it firmly around the body—first wetting his hands so he will not damage its protective oily coating—and removes the barb from its upper lip. He holds the trout facing upstream a moment longer, until its gills begin to move regularly, and then he spreads his hand and watches it dart back into the current with a farewell flick of its tail.

“…the dry-fly angler does not come home empty-handed. His creel may be barren at the end of the day, but be brings back other things; the sound of running water and smell of wet rocks, the memory of a grouse drumming on a log, a beaver’s v-shaped wake as it crossed the pool, the sudden skirl of a kingfisher, like a winding reel. They will last longer than a fish curling in a pan.

“A friend of mine, an ardent purist, was challenged once by a golfing acquaintance as he turned loose a large trout he had just netted. ‘Why go to all that trouble to catch a fish,” the exasperated golfer demanded, ‘if you don’t want to eat it?’

“‘Do you eat golf balls?’ my friend inquired pleasantly.”

Fly-fishing is best known as a method for catching trout and salmon, but it can also be used for catching a wide variety of species: freshwater fish such as pike, bass, panfish, and carp, and marine species such as snook, tarpon, bone fish, and striped bass. A growing number of fly-fishers are broadening the number of species they pursue, using cold- and warm-water techniques.

Whether you are an amateur or an expert, the goal is not to catch the most fish. It is to gather rich memories and sharpen skills that apply to everyday life, like thought, planning, and dexterity.