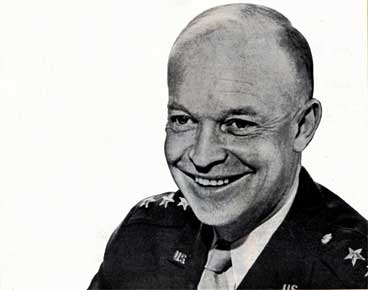 On this day in 1890, Dwight David Eisenhower was born on a farm in Abilene, Kansas. He was probably the last American president to take the mythical path to the White House. Though not born in a log cabin, he did grow up on a small farm far from the city, enlisted in the army, rose through the ranks,  achieving a brilliant victory, and then moved into politics.

As late as 1942, though, Eisenhower was still unknown to America. That year, Post writer Demaree Bess wrote “The Army’s Favorite General” to introduce him to the country that would soon be entrusting him with their sons.

The toughest assignment in the world today is the opening of a second front. Meet the soldier who has it, Ike Eisenhower, of Kansas and London.

A few weeks ago, talking in Washington with a veteran Army colonel, I remarked that I was gathering material for an article about Lt. Gen. Dwight D. Eisenhower, the man who has been sent to England to organize the American share of the second front against Germany.

“Well, you’ll find it hard sledding to write an exciting article about Ike Eisenhower,” commented the colonel. “There’s nothing romantic about him. He’s never done anything spectacular. The public never heard of him until a few months ago, and most of the politicians have never laid eyes on him. But there is one thing about Ike Eisenhower—he’s the Army’s favorite general.”

That phrase—”the Army’s favorite general”— stuck in my mind. I decided to find out whether it was true and, if so, why. Now, having talked with dozens of officers and men who know General Eisenhower, I have concluded that it probably is true. Certainly his appointment is unanimously approved by the soldiers—from generals to privates— who have worked with him and over him, and under him, during his twenty-seven years in the regular Army of the United States.

The exciting part of General Eisenhower’s story lies, not in his personal life, but in his professional career. A little more than a year ago, Dwight D. Eisenhower was just one of several thousand colonels in our regular Army; and, so far as the American public knew, he was no different from the rest. But today he is one of our Army’s sixteen lieutenant generals, holding rank equivalent to the highest that George Washington attained. He has been advanced more rapidly than any other American officer. More than that, he has been handed the toughest assignment at the disposal of the War Department—that of cracking German defenses on the continent of Europe.

Bess assured the country that this young (52 years old that year) general had risen without influential friends or powerful connections. He had risen through the ranks on merit alone. He had graduated in the upper half of his West Point class. During the First World War, he had earned a brevet rank of Lieutenant Colonel for his work in training America’s fledgling tank corp. General MacArthur was so impressed by this unassuming young man, he chose him as his top military aide in the Philippines. The top brass were impressed with this young officer’s ability to see the big picture without losing sight of practical matters.

One reason why General Eisenhower was selected for his present post is that he was perhaps the first of our staff officers to suggest a second front… when asked for his plans, he submitted details which persuaded his superiors that his plans are both brilliant and sound. He was able to create these plans because, for more than a quarter of a century, he has been an inspired student of mechanized warfare and because, in recent large-scale maneuvers in this country, he revealed extraordinary originality in his direction of this type of combat.

What Bess couldn’t know at the time of this article was that Eisenhower also had a genius for diplomacy.  Time after time, Ike was able to win cooperation from Allied generals and politicians. He spent years was negotiating, arguing,, pleading, cajoling, and manipulating such prickly men as Churchill, General Bernard Montgomery, George Patton, Charles de Gaulle, and the Russian General Zhukov, to keep the great alliance alive.

Perhaps his great accomplishment was successfully landing 24,000 soldiers on the French coast, directly in sight of massive German defences. It was an extraordinary feat of planning, which called for the kind of military genius needed in modern war, as described by British essayist Walter Bagehot:

The soldier—that is, the great soldier—of today is not a romantic animal, dashing at forlorn hopes, animated by frantic sentiment, full of fancies as to a love-lady or a sovereign; but a quiet, grave man, busied in charts, exact in sums, master of the art of tactics, occupied in trivial detail; thinking most of the shoes of his soldiers, as the Duke of Wellington was said to do; despising all manner of éclat and eloquence; perhaps, like Count Moltke, silent in seven languages.

General Eisenhower is not exactly a grave and quiet man; he likes plenty of good conversation and his share of fun. But he certainly is no “romantic animal, dashing at forlorn hopes.” Being an infantryman, he knows the importance of shoes for his soldiers; and, being a tank expert and a qualified pilot, he fully appreciates the role of tanks and air- planes in modern warfare. For more than a year he has been “busied in charts” which directly concern his present mission; and his associates can attest to his passion for “trivial detail.”