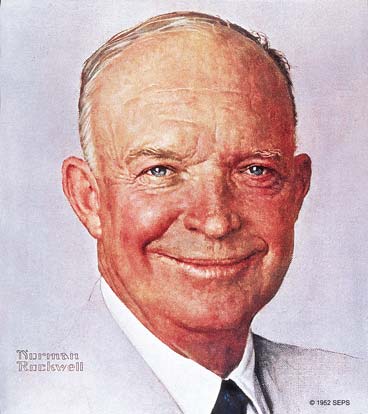 Seven years after leaving the White House, Dwight D. Eisenhower was voted the most admired person in America. Normally the winner of this annual Gallup poll was the sitting president, but in 1968 Lyndon Johnson had become too unpopular because of his Vietnam policy.

Still, it’s remarkable that, of all the notable Americans alive that year, the choice fell to a 78-year old ex-president. Even in retirement, with poor health restricting his public appearances, he was still highly regarded by Americans.

He probably never lost the admiration he earned as Supreme Commander of the Allied armies in World War II. No doubt his decision to run for president as a Republican instead of Democrat cost him some supporters. But while he was the leader of his party, he never became a political president; he would always promote the national good before party interests.

He kept the Republicans’ promise to reduce taxes, balance budgets, and decrease government control over the economy. But he also increased the minimum wage, expanded Social Security, ordered 1,000 U.S. soldiers to Little Rock, Arkansas, to enforce integration, and launched a massive public-spending project: $25 billion to build 40,000 miles of superhighway across the country. (The original 12-year project eventually lengthened to 35 years, and the price rose to $114 billion, and we still think it was a bargain.)

For a time, Eisenhower seemed to antagonize conservative Republicans more than his Democractic opponents, especially when he opposed the grandstanding red-baiter, Senator Joe McCarthy. Yet Eisenhower was an implacable enemy of communist imperialism. He never used accusations and threats, but applied steady pressure against Russia through diplomacy, foreign aid, and occasional military intervention. And when a U.S. spy plane was shot down over Russia, Eisenhower took personal responsibility.

He left office in 1961, ready to enjoy the pleasures of private life. In March of that year, he wrote about the life he saw before him in “Now That I Am A Private Citizen.”

On January twentieth I ended, with mixed feelings of satisfaction and regret, an almost complete half century of public service… the first four years were spent as a cadet in West Point, some thirty-seven as an officer of the Army, and the final eight as commander in chief of the armed forces and President of the United States…

From December, 1941, until the completion of my two terms in the Presidency, there have been few periods in which I have not been confronted with important public problems, for the solution of which I have borne some decree of responsibility.

But now, having left the White House, Mamie and I have become a part of America’s private citizenry. We have no governmental responsibilities, no duties except those belonging to every other individual in this republic. We had often, through the years, looked forward eagerly to this kind of existence…

Adjustments, big and little, began soon after I left the platform last Inauguration Day. I have now learned, once more, how to dial a telephone and how to drive a modern automobile, something I have not done for nearly twenty years…

Ike knew he would miss the daily news briefings he enjoyed as a president. No longer could he simply pick up a phone and call in advisors and experts to inform him breaking news stories. But this, he realized, was how Americans lived. They pieced together news stories. They discussed and debated among themselves. They worked hard to keep informed.

I believe that every good citizen owes it to himself and his country to formulate his conclusions on vital national issues as carefully as if he were actually sitting in the President’s chair. He will not find this easy. There is no magic formula for reaching satisfactory decisions; certainly none that would be acceptable to every thoughtful person.

I here set down without explanation or argument, and in terms of basic tenet, the highlights of my political beliefs. These are not original; some are hoary with age. But, among others, they include:

• We live in a society founded upon a deeply felt religious faith dedicated to the maintenance of human liberty and dignity, of the nation’s security, and of public order.

• Only in a world of peace with Justice can the peace and prosperity of any nation be assured.

• To insure the nation’s security and progress requires a balanced strength— spiritual, economic, military. To neglect any of these necessarily weakens all.

• An intelligent approach to every political question, domestic or foreign, must seek the enlightened self-interest of this nation.

• A free, competitive economy is essential to the existence of maximum human liberty.

• Maintenance of a sound, stable currency is essential to the growth of a free, competitive economy.

• Deficit spending by the Federal Government is justified only in emergencies of the gravest kind. The inevitable effect is to place an increasing and stifling burden upon the economy and to rob the future of its legitimate heritage.

• The promotion of the overall national good must always take precedence over any attempt of a special group to advantage itself.

• The need for balance in governmental programs is always present—a balance between current pressures and future good: between individual liberty and the meeting of nationwide requirements by government; between creature comforts provided by the state and the maintenance of a national creative capacity depending upon individual initiative, self-confidence and self-dependence; in sum, a balance that repudiates extremes in vast human affairs and seeks practical solutions so as to mobilize the energies of the vast majority.

• Added to these are certain precepts, such as:

—assemble all the facts on a problem, and it often solves itself;

—all generalities are false, including this one;

—make no mistakes in a hurry, but any decision is better than none;

— finally, and probably the most important, always take your job seriously, never yourself.

For me, they spell sound, balanced and progressive government.

These points were more than just nice ideas to Dwight Eisenhower. They were principles by which he lived. Which is why historians may argue Ike’s decision, but few argue his integrity.