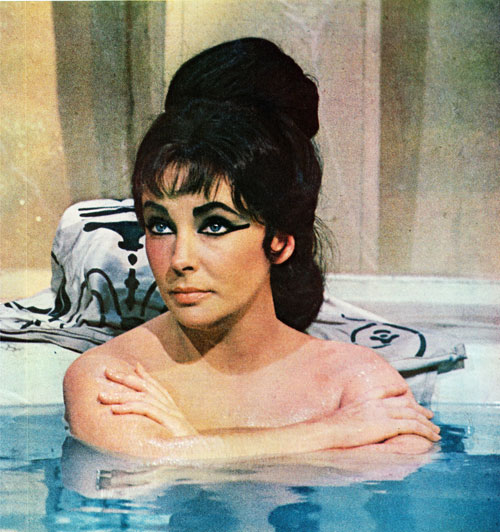 Despite Director Mankiewicz's claim that the film is "intellectual," one of its principal attractions is Liz's nude bath scene.

It probably killed the old “studio system” in Hollywood. The Taylor-Burton version of “Cleopatra,” originally budgeted for $2 million, wound up costing Twentieth Century Fox $44. The studio spent two-and-a-half years producing the film, which featured lavish sets, full-scale barges, an army of “extras,” and 65 costume changes for its star, Elizabeth Taylor.

The result was an extravaganza that clocked in at six hours in the director’s cut. The studio cut the film down to four hours for the premier and three hours for theatres, which still proved a little too long for public taste, even with all the big-name stars and the gaudy staging. “Cleopatra” may have been 1963’s top grossing film, but it only recovered half of the studio’s expenses that year. Twentieth Century Fox was brought dangerously close to financial collapse that it couldn’t breath easily until 1965 when it was saved by the highly popular “Sound of Music.”

If the movie was less successful as a theatrical release, it was a stunning triumph as a tabloid sensation. The romance that sprang up between Taylor and co-star Richard Burton made “Cleopatra” the object of continual attention from the media. Writing about his work in producing the movie, Walter Wanger said “I have been told by responsible journalists there was more world interest in Cleopatra… than in any other news event of 1962”—a considerable claim in the year of the Cuban missile crisis.

But Wanger wrote that Taylor had been his only choice since the project began. And the studio’s faith in her was so great, it continued to sink millions into a picture that probably would have been cancelled if it had another leading lady.