So how did the uproar over “swine flu” get started?

Dr. James Lowe, a swine veterinarian at the University of Illinois College of Veterinary Medicine in Urbana, recently offered a brief primer on influenza as well as some background on the 2009 flu outbreak. Food animal veterinarians play an important role in protecting public health by ensuring a safe food supply, but influenza is not a disease that is spread by eating meat, so worries connecting pork and flu are entirely unfounded.

“The virus that causes influenza is genetically unstable, meaning it evolves rapidly,” says Dr. Lowe. “The influenza virus changes so quickly that scientists who develop vaccines must race to try to keep ahead of it.”

Whereas vaccines developed to prevent tetanus and measles remain effective for years because the infective agents that cause these diseases change little, the flu vaccine must be updated every year. Flu shots are designed to protect against a few strains of the influenza virus that are predicted to be common in a given flu season.

“Most mammals and birds are affected by influenza,” says Dr. Lowe. “Scientists categorize influenza A strains according to two proteins found on the surface of the virus: hemagglutinin—hence the “H”—which has 17 variations, and neuraminidase—“N”—with 9 variations. The structure of these proteins differs from strain to strain because of rapid genetic mutation.”

Strains of the influenza virus affect various species differently. For example, people are usually only affected by the H1, H2, and H3 and the N1 and N2 strains. Some of these variations also affect birds and pigs. Strains arising in different species can combine to form novel strains that may affect more than one species.

There are three strains of influenza now circulating in U.S. pigs that also affect people: H1N1, H1N2, and H3N2. The flu is spread primarily by exposure to the virus through coughs and sneezes. It is just as possible for people to give the flu to pigs as it is for pigs to give the flu to people.

Pigs and people experience much the same manifestations of flu: runny noses, cough, and high fevers. The deadly aspect of influenza occurs if it damages the airways, allowing secondary infections to set in.

For people, key strategies for keeping flu-free are washing hands and staying home if infected. For pigs, modern farms have very stringent biosecurity protocols that prevent people from bringing pathogens in or out of the farm.

Although it was called “swine flu,” H1N1 is historically a human flu. It was the culprit in the 1918 pandemic Spanish Flu.

The H1N1 flu outbreak of 2009 originated in Mexico. Ironically the first cases of the 2009 outbreak that affected U.S. pigs were traced to sick farm workers who had contracted the illness from schoolchildren.

The influenza virus is a frustrating virus to deal with, even when it is not deadly. It causes major economic losses in people and pigs: people lose productivity and incur medical bills, and pigs don’t grow well so farmers lose income.

The truth is, new strains of the virus will continually appear, and from time to time a new strain will cause more severe illness than is typical. But there is no true “swine flu,” and certainly not one that is guaranteed to be deadly in people.

It is simply the flu, we can all get it, and we all try our best to avoid it.

If you have questions about infectious diseases that pass between people and animals, your local veterinarian can be an excellent resource.

Andrea Lin is an Information Specialist at The University of Illinois at Urbana-Champaign College of Veterinary Medicine. 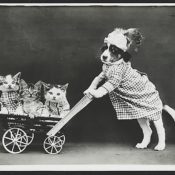