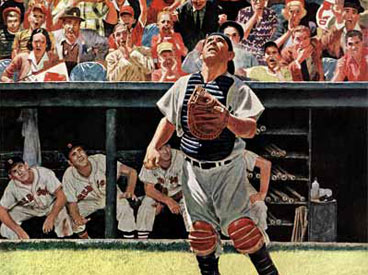 What a career! Yogi Berra spent almost 19 years with the Yankees as an outfielder and catcher, was named American League Most Valuable Player three times, and participated in 21 World Series (as a player, manager, and coach).

And he’s one of the most quotable people on the planet.

Earl Mayan posed Berra in Yankee Stadium for this 1957 cover. Most of the yelling, cat-calling, complaining fans behind the catcher were friends of the artist who, editors assured us, “were real nice-looking people till he asked them to look like baseball fans.”

The “fans” are keeping an eye on the action, heeding Berra’s advice, “You can observe a lot just by watching.”

Berra is playing his part well, concentrating on that high, fly ball because, “baseball is 90 percent mental—the other half is physical.” But, actually, we don’t know how much of this is true, since, “I didn’t really say everything I said.”

“Mr. Moore” to the left isn’t overly concerned with nature’s bounty. He had one little bloom and let it get all droopy.

Although the sign on the house says “Moore,” he doesn’t fool us: As our cover artists sometimes liked to do, the part of the disappointed golfer was played by illustrator Earl Mayan himself. A Long Island buddy of the artist posed for the part of the happy gardener.

Mayan illustrated 10 Post covers and over a hundred fictional stories that appeared in the magazine in the ’50s and ’60s. The stories ran the gamut from spy thrillers to detective mysteries to this gem we found from 1951.

A saloon singer in the gold mine camps of 1853, Prudence Ledyard, came out with two revolvers blazing when she came across some toughs trying to jump her claim. Turns out they weren’t as tough as they thought they were, and thereafter the demure saloon girl was known as “Madame Forty-Four,” which was the title of this 1951 story by Michael Foster.

One thing we can say about the slackers in the first panel: They clean up good. The groomsmen are slouching, the bridesmaids are yawning or applying make-up and the flower girl is yo-yoing. But a magic wand was waved and somehow this group materialized into a proper ceremony. And it was an actual wedding that Mayan painted.

Editors noted “when Mayan felt sorry about having to paint the Very Rev. Albert Greanoff’s back view, he then put him in the pews a couple of times, front face. This may surprise the rector.”

In the post-war ’50s, urban sprawl created problems such as traffic jams. Or perhaps it was just pretty girls.

Frustrated drivers are understandably irate as the traffic cop lingers in a female-induced coma, but we get a terrific view of the mid-1950 automobiles.

Okay, we know you’ve heard this story before, but isn’t it nice seeing all that snow during the summer sizzle?

One more, because this is one Earl Mayan cover I can’t resist. It’s the top of the ninth, the score is tied, and there are two strikes on the board, for crying out loud.

What I love most is the “what can you do?” look on dad’s face as he hauls away the little fan who couldn’t last any longer.