“Nothing ever quenches the artist in him. … The world is his studio,” wrote The Saturday Evening Post in 1971 when artist John Falter came to visit.

While the Post‘s art director was preparing a portfolio of Falter paintings for that profile, intent over his drawing board, “he turned to find John scrunched down behind him, pencil in hand, sketching swiftly and surely.” Unlike the art of Rockwell, Leyendecker and most Post artists, John Falter’s work was less about people and more about settings. It was all about perspective, and the paintings seemed to be from the viewpoint of a bird in a nearby tree.

The lettering on the bridge warned: “$5 Fine for Any Person Riding or Driving Over this Bridge Faster Than a Walk or Smoking Segars On.”

Hey, the artist didn’t write it, he just painted it.

Post editors speculated that maybe Falter should be fined $5 for letting that kid walk on the wall. We’ll not fine him this time, since we love how he captured this 1954 Pennsylvania scene, which makes the viewer long to be a kid on a lazy summer day, riding his bike and wading in the creek. Our bird is looking down at a family returning from vacation in August 1952—and perhaps wishing they hadn’t. Not only is the lawn in desperate need of attention, but that little bird forgot to tell them to cancel the newspapers and milk (oh dear, how old is that milk?). While dragging out the mower, mister, you might want to get the ladder—it appears a couple of newspapers landed on the roof. But, be it ever so neglected, there’s no place like home.

An interesting tidbit from the Post article noted above was that Falter always painted from the south, so we are looking north. In this instance, the ominous northern sky greets the weary travelers with the news that they probably need not get the mower out just yet. One can only hope the house key isn’t at the bottom of a suitcase. It looks like everything from farm implements to household goods are going in this country auction, including the neglected Victorian loveseat in the foreground, much to the dismay of the offended hen who was using it for nesting. This cheerful cover was surely a treat in 1944, when war news was everywhere, including inside this issue.

Born in 1910, Falter succeeded at a young age. He was landing prestigious assignments at magazines like McCall’s, Cosmopolitan and Life when he interrupted his career to enter the Navy during World War II. Promoted from boatswain to lieutenant, he designed over 300 posters and other materials for the Navy recruitment program.

It is interesting to compare these bucolic covers with Falter’s cityscapes, again from the bird’s eye view, which were covered in “Can You Guess the City?” 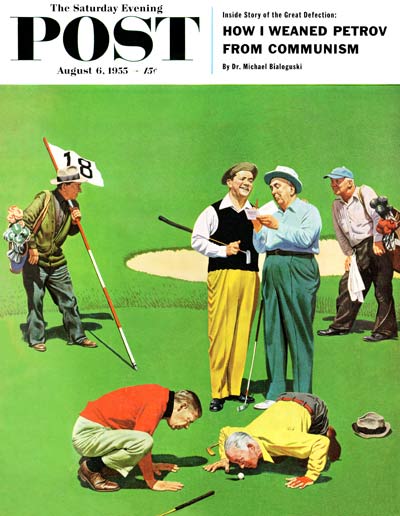 It is estimated that John Falter completed over 5,000 paintings. This is not all that surprising, said a 1991 Post article, considering that “Falter awoke every morning at 3 o’clock to concentrate on the work in progress, and that he painted until 5:30 p.m. six days a week.”

It is doubtful he had much time for such pastimes as golf. As much as he enjoyed the outdoors, clearly his passion was art. “It has to be a love affair every time,” Falter said. “If you aren’t in love with what you are trying to put on that canvas, you better quit”. “Sometimes Nature rains on a picnic; sometimes she is just neutral; and sometimes, as in this mood caught by John Falter’s brush, she glories in the occasion herself, painting a magic sunset, smoothing the waterways into mirrors, tempering the temperature, even arranging for the watermelons to be at their most luscious ripeness.” Post editors in 1951 waxed poetic over this cover of an evening picnic.

The 1971 Post profile echoed, “Falter’s masterful treatment of light stems from the fact that he is a nature lover and happily gifted to reflect her moods.”

Nature continued to be a focus after his Post years (the magazine covers went from illustrations to photos in the 1960s). A 1991 Post article noted that one of his projects was “190 canvases of scenes depicting the western migration from the Missouri River to the Rocky Mountains.”

That love of nature lasted until his death in 1982, noted the article. “His ashes were cast into the mouth of the Platte River where they would flow down the Missouri—the setting of many of his historical paintings.”