Of winter’s lifeless world each tree now seems a perfect part;
Yet each one holds summer’s secret deep down within its heart.
—Charles G. Slater

This scene with its impressionistic, stark, winter trees is an inside illustration from Country Gentleman, a sister magazine of The Saturday Evening Post. The artist, Walter Emerson Baum (1884-1956), was born in Sellersville, Pennsylvania, and painted many landscapes of his home state. He is particularly known for his rugged work ethic; he frequently painted outdoors, even as winter storms raged.

Baum, in addition to illustrating and producing fine art, was an art teacher in Allentown, Pennsylvania, from 1926 to 1956. He was also a writer, a columnist for the Sellersville Herald and eventually he became the paper’s editor. He wrote the book Two Hundred Years, a history of the Pennsylvania Germans in his hometown. This Dominice Cammerota illustration shows the fun side of winter. The artist painted two more Post covers, also of women enjoying seasonal pastimes: a summer sunbather reading the paper on her rooftop (August 3, 1940) and a springtime gardener in a wheelbarrow (May 10, 1941). If only there was a fall cover to complete the set.

Interestingly in this issue, which went to press while Gone With the Wind was captivating Americans in the theater, an editorial offered up the fate of a fraudulent manuscript purportedly written by Margaret Mitchell, whose book the movie was based on. The editorial included the first paragraph of the 50-page manuscript, noted that the editor had contacted the real Margaret Mitchell, and advised readers: “We’re holding the manuscript,” then asked, “Would the author like to collect it?” Not surprisingly, there were no takers. 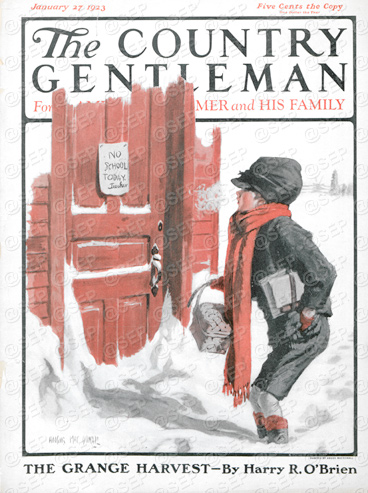 We don’t know how far this young man trudged through the snow to get to school, but it was all for naught. The sign on the door says it all. This 1923 cover was typical of the humorous, homespun style of Angus MacDonall (1876-1927) who did 21 covers for sister magazines, The Saturday Evening Post and Country Gentleman. He was a cartoonist and illustrator for Life for many years and contributed artwork to other publications such as Harper’s and Ladies’ Home Journal.

MacDonall came from St. Louis but eventually moved to the seaside town of Westport, Connecticut, where he helped establish it as an art colony. Among its list of famous residents throughout the 20th century are Post artist Stevan Dohanos, American author F. Scott Fitgerald, and actor Paul Newman. Matt Clark (1903-1972) and his brother Benton, also an illustrator of Western art, came from a Coshocton, Ohio, family whose lives revolved around horses. Both artists were inducted into the Society of Illustrators Hall of Fame in 2008. The society, in describing the brothers’ similar styles, summed up this 1944 cover aptly: “Not reliant on close-ups or facial expression to express the emotions of the characters, they used the attitudes or the actions of whole figures to describe their relationships. That also included the settings—letting the landscape play a role.”

The Clark brothers did more than 100 illustrations for fiction in The Saturday Evening Post, and Matt Clark created six Western or rural-themed covers for Country Gentleman magazine.

Snow on the Farm “My approach was to look for human interest subjects and then try to place them in a proper setting to fit the idea,” illustrator John Clymer (1907-1989) said. The children (along with cat and dog) playing in the snow in this 1956 cover are all but overwhelmed by the beautiful landscape. Clymer could say what he liked about his human subjects, but his landscapes always dominated the 80 covers the artist did for the Post.

Painting covers for The Saturday Evening Post was a career highlight for any illustrator, but they often learned the hard way about accuracy, as Clymer told art historian Walt Reed in John Clymer, an Artist’s Rendezvous with the Frontier West: “There was only one drawback about doing covers for the Post. They went everywhere in the country, and because I picked and painted actual places, there would be several hundred people who lived nearby who’d scrutinize every detail to try to find something wrong. There would always be someone like a telephone lineman who’d write in and say, ‘I don’t think that was the kind of insulator they used in that area.’” But only once did Clymer have to correct a cover he submitted: “I sent in a picture that had an automobile in the foreground. I had completed everything, lights, chrome, trim, spokes, but forgot to paint the door handle.”