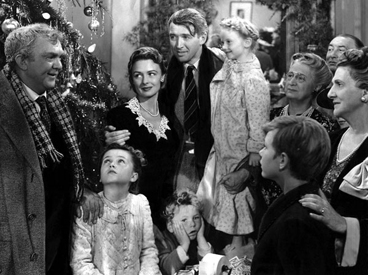 ’Tis the season to gather round the flat-screen and enjoy classic Christmas movies. And who better to share his expert opinion on which holiday flicks endure as timeless gifts, and which are so much celluloid coal, than Robert Osborne, the primetime host and anchor of Turner Classic Movies? Since 1994, dapper, silver-haired Osborne has introduced viewers to the best that Hollywood—and the rest of the movie-making world—has produced. He’s also the author of 80 Years of the Oscar, the only official history of the Academy Awards. And, as we learned when we caught up with him at his New York City home, he has a thing for Barbara Stanwyck.

If you were stranded on a desert island—or at the North Pole—with only two Christmas DVDs to watch, what would they be?

Number one would be my favorite Christmas film, Ernst Lubitsch’s The Shop Around the Corner (1940), which always, automatically, puts me in a jolly Yuletime mood. It’s such a “feel-good” movie, and Jimmy Stewart and Margaret Sullavan are so good in it, it would make me forget I was stranded in the wilderness when everyone else I know is gathering together somewhere for the holidays. My second pick would be Christmas in Connecticut (1945) with Barbara Stanwyck, Dennis Morgan, and Sydney Greenstreet. I am a big Barbara Stanwyck fan, and from the time I saw the movie as a kid, I thought the ideal Christmas would be one spent in a house like the one in that movie, with someone like Stanwyck as the hostess.

So, what are the necessary ingredients of a great Christmas movie?

A great Christmas movie needs warmth, as in Come to the Stable; an entertaining storyline as in It’s a Wonderful Life; holiday relevance as in Miracle on 34th Street; originality as in A Christmas Story; and a great cast as in The Bishop’s Wife.

Can you recall the first Christmas movie that inspired or delighted you?

Yes, that would be Since You Went Away (1944) with Claudette Colbert, Jennifer Jones, and Joseph Cotton. It’s not a Christmas movie per se, instead it’s about life on the homefront in America during World War II, but it has a powerful finish that occurs on a Christmas Eve. I remember it had the entire audience in the movie theatre in my hometown sobbing (with joy, not sadness) when the credits rolled around. It was my first awareness of the powerful effect movies can have on one’s emotions.

Without question Britain’s Alastair Sim in Scrooge (1951). He was so Dickensian and frightening; no Hollywood glamour at all. But I always regretted that Lionel Barrymore, who was legendary in the ’30s and early 1940s for every year playing Scrooge on the radio, wasn’t able to star in MGM’s A Christmas Carol (1938) which had been designed for him to do—he was Scrooge and it’s a shame that famous performance of his was never recorded on film. Because of a severe hip injury he was confined to a wheelchair, and A Christmas Carol starred Reginald Owen instead.

Can you suggest a little-known or under-appreciated Christmas movie that everyone should see?

Remember the Night (1940) with Barbara Stanwyck and Fred MacMurray is a very nice Christmas movie that nobody seems to know. It’s well worth watching, especially to see Stanwyck and MacMurray together in a warm, charming romance about a male prosecutor who befriends a female shoplifter at Christmas, leading to their falling in love. It couldn’t be more different from the Stanwyck-MacMurray classic Double Indemnity in which they play hard, cold killers. Its other great asset: The screenplay is by the great Preston Sturges just before he began directing films as well as writing them.

There’s been debate over which animated Christmas movie is best—A Charlie Brown Christmas or How the Grinch Stole Christmas. What’s your opinion?

I enjoyed them both, but I have to admit that I’m not a big fan of animated movies. You need someone 12 or under to answer this one.

What is possibly the worst Christmas movie ever made? What is so awful about it?

My vote here would have to go to Arnold Schwarzenegger’s 1992 TV movie remake of Christmas in Connecticut with Dyan Cannon. Arnie’s not in it; he directed it. Very bad, extremely unnecessary. You know you’re in trouble when a role once played by Sydney Greenstreet is done by Tony Curtis.

Is there a Christmas movie that you would like to show on TCM, but haven’t had the opportunity?

It would be great to be able to show It’s a Wonderful Life since it is such a definitive Christmas film, but it’s legally tied up elsewhere. I certainly can’t complain about the cornucopia of Christmas movies that we do have in the TCM library and are able to show every year when the holidays roll around.

Is Hollywood capable of making a great Christmas movie these days?

Absolutely. The question is whether or not anyone would even try to make one without at least 10 trucks exploding and a computerized Spider-Man walking up the side of a building.

OK, a last, tough one: White Christmas or Holiday Inn?

Actually, that’s easy: Holiday Inn (1942), because it’s Crosby and Astaire at their prime. (See also, “Call Me Lucky” by Bing Crosby as told to Pete Martin in 1953.) It’s full of sass and energy. The only advantage that White Christmas (1954) possesses is the fact it’s in Technicolor, which seems appropriate for a major musical. But Crosby at age 39 in Holiday Inn is tremendously appealing; you understand why he was such an enormous star. At age 51 in White Christmas, he seems tired and weary; he and Danny Kaye both seem too old to be trying to get a break in show biz.