In February 1950, Joseph McCarthy hunted down communists, the atomic bomb terrified Americans, and scientists marveled at the “mechanical brains” of computers. The Saturday Evening Post was there to report it all. 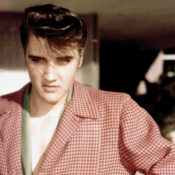