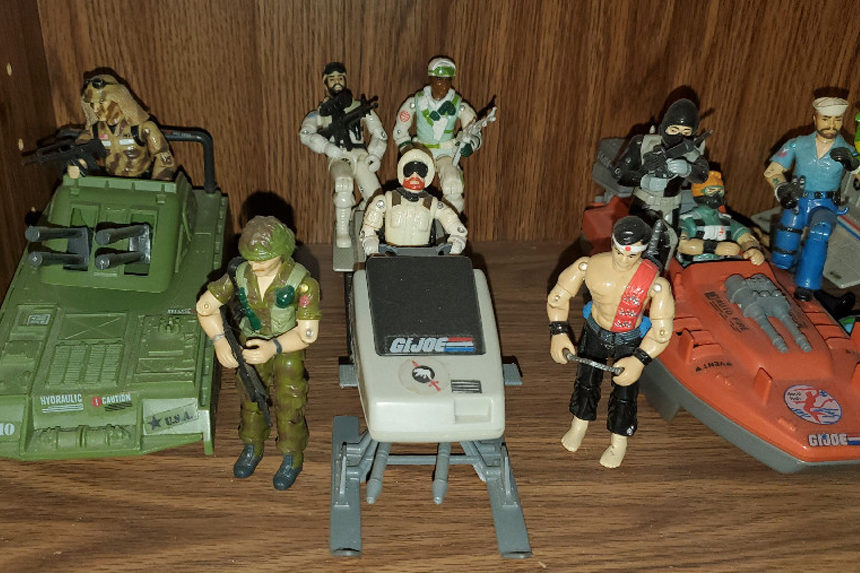 The American marketplace has always been driven by innovation and reinvention. The toy business is no exception. While the fundamentals of the teddy bear or the hula hoop might stay the same, they’ve got through reengineering, retooling, and repackaging throughout the decades. One of the most famous toy reinventions took place forty years ago this summer. While its 1964 debut was a hallmark of innovation, the brand was in dire need of new energy by the 1980s. And when that simple twist arrived, it made the toy a pop culture phenomenon for the second time. That toy was G.I. Joe.

The original idea for G.I. Joe was rooted in what were considered gender divides in the toy marketplace. In the 1960s, there was an overall impression that parents wouldn’t buy toys for boys that were largely associated with girls, namely dolls. With Barbie reigning as the queen of the toy universe, a variety of creators attempted to come up with a comparable boys’ item. Stanley Weston got there first. He came up with prototypes of a 12-inch-tall figure, comparable in size to Barbie, that would be a military character. Weston met with Hasbro’s Donald Levine, who immediately saw the potential. Weston licensed the concept to the toymaker, and they assigned a new term to the toy to avoid the use of doll: action figure.

Branded as “G.I. Joe: America’s Moveable Fighting Man,” the 12-inch line debuted in 1964. The first offering included four figures, each representing a branch of the armed forces: Action Pilot, Action Marine, Action Sailor, and Action Soldier. Hasbro also produced separate accessories and uniforms for each figure that were reflective of his branch of service. The appearance of G.I. Joe coincided with the beginning of the escalation in U.S. involvement in Vietnam. The following year, Hasbro introduced a Black figure with an aim of expanding the audience. The toy was a major success for years, but the company sensed a need to redirect the line as the Vietnam War became increasingly unpopular in America.

Beginning in 1970, G.I. Joe started to get repositioned as a team under the G.I. Joe Adventure Team title. Gear was tailored to different environments, features like “Kung-Fu Grip” were added, and the line started to introduce bad guys for the first time (even aliens). One big fan of this era was writer Jim Beard; Beard edited the essay collection The Joy of Joe: Memories of America’s Moveable Fighting Man from Today’s Grown-Up Kids. Beard recalls, “There was such a wide range of stuff for Joe, and it was all so imaginative and exciting. The colors helped a lot with that, and the artwork on the packaging. That might be one of my most favorite aspects of the Adventure Team line, the artwork. Each and every piece was a launching pad for ideas.”

Despite Hasbro’s best efforts, the line faded by 1976. Hasbro attempted to refocus again, this time cutting the size of the Joes down to an eight-inch scale; that was the scale initially deployed by Mego’s wildly popular super-hero figures representing characters from both DC and Marvel, and it also decreased the use of petroleum for plastic as the ’70s oil crisis marched on. The “Super Joe Adventure Team” continued to fight aliens until 1978, but the line went dormant in the face of Star Wars conquering both the box office and the toy aisles.

Flash-forward to 1982. According to interviews with then-Marvel Comics Editor-in-Chief Jim Shooter, a higher-up at Hasbro ran into Marvel’s then-president Jim Galton at a charity event. As the two spoke, the Hasbro official mentioned that they wanted to get G.I. Joe rolling again in the 3.75-inch Star Wars scale, but were having issues. Galton touted the creativity of his team and arranged a meeting for Hasbro and Marvel to work together. Shooter assembled a group that included himself and writer-editors Larry Hama, Tom DeFalco, and Archie Goodwin. From the first meeting, the Marvel team started shaping the idea in new directions. Shooter suggested that G.I. Joe should be a team code-name rather than one person, and that the team should battle terrorists. Goodwin posited an ongoing villain group with a name like Cobra. Hama took the initial character designs and developed personalities and dossiers for all of them; an ongoing feature of the toys would be character file cards on the back written by Hama.

The G.I. Joe #1 commercial (Uploaded to YouTube by 3DJoes)

In addition to creative collaboration, Hasbro and Marvel worked out a previously-unheard-of strategy. Marvel would produce a comic featuring the new characters, and Hasbro would pay for fully-animated commercials to advertise the comics. It was an end-run around an FCC regulation that prevented toy commercials (but not comic commercials) from only having a few seconds of animation. Since the stars of the comics were also the toys, the comic commercial got to showcase both the series and the figures at the same time. Actual commercials for the toys were done in live-action with child actors, typical for toy commercials of the time.

Right out of the gate 40 years ago this summer, both the toys and the comic were massive successes. One of the young fans was Brandon Jerwa, who would grow up to write G.I. Joe comics himself. Jerwa clearly remembers his first encounter with the re-named G.I. Joe: A Real American Hero line. He says, “We were at the Kmart in Manhattan, Kansas, and my family did well enough that I could usually count on getting some kind of toy at the store. I saw a couple of G.I. Joe figures on an end cap, and I chose Flash as my very first figure. I was immediately obsessed, and Star Wars fell to the wayside in favor of these awesome action soldiers.”

Weighing the benefits of the 3.75-inch scale against the 12-inch scale, Jerwa notes, “I think it’s just easier to build — and play with — an army of smaller soldiers. I can’t imagine we’d ever have the breadth of vehicles and playsets with 12-inch figures . . . we have so many amazing characters because the line was produced in such massive quantities and with such a great variety. Yet another thing I don’t think we can pull off of that larger, more expensive scale.”

The first episode of the 1983 G.I. Joe animated mini-series (Uploaded to YouTube by Hasbro)

In 1983, Hasbro, Marvel, and Sunbow Entertainment (makers of the animated commercials) collaborated on an animated TV mini-series. G.I. Joe: A Real American Hero was comprised of five episodes that ran over five consecutive days. It was a huge hit, as was 1984 follow-up The Revenge of Cobra. Both mini-series introduced dozens of new characters and vehicles, continuing the synergy between the toys and comics with a whole new angle. By 1985, the animated series became a daily show; 95 total episodes would be released by 1986.

G.I. Joe was one of the rulers of toy shelves in the 1980s. The comic ran for 155 issues, and the original iteration of the toy line ran until 1994. Since that time, it’s been revived in fits and starts. The comic has moved around between various publishers. Jerwa made his comic-writing breakthrough in 2002 with his childhood favorites. He says, “For me it was a dream come true, because this was unlocking all of the love and knowledge that I had hiding just behind a door in my brain. It was nice to get paid for thinking about G.I. Joe, because I was doing it for free anyway. It launched my career, but I would be so proud and so happy even if it had been the only thing I ever did in comics.” That’s high praise from Jerwa, given that his comics career includes properties like Battlestar Galactica, Xena, and Highlander.

As for the figures, Hasbro has had a bit of a renaissance in the past few years. Beginning in 2020, Hasbro introduced G.I. Joe Classified, a six-inch scale collection using the Real American Hero characters made at the same size as their extremely successful Marvel Legends and Star Wars: The Black Series lines. Like those two expressions, Classified is aimed at older collectors. It’s been a hit from the announcement.

Jerwa counts himself a major fan. He says, “I am just crazy about these figures. I was afraid that it would be an initial short-lived burst, but fans might not embrace it. The fans can struggle with new body types and gimmicks at times. We fear change. I’m so happy I was wrong, because they are really bringing classic G.I. Joe back to life with these figures.”

It’s appropriate that the latest version of G.I. Joe fits in beside its Marvel and Star Wars counterparts. Like those two franchises, G.I. Joe has proven to be extremely durable and continually adaptable.  The fact that a team version of G.I. Joe is the longest lasting iteration of the character is an encouraging note; youngsters see cooperation as part of the play pattern, and the wide and diverse cast of characters means that every collector has the opportunity to identify with characters that resemble them or their own background. True to their theme song, G.I. Joe is one idea that “never gives up.”