What do Thomas Jefferson, Theodore Roosevelt, Hannibal Hamlin, and Millard Fillmore have in common? All are former vice presidents of the United States. Two are on Mount Rushmore; two are not.

Forty-seven men have occupied the office of vice president, and while they were in there, they did little other than serve as presiding officer of the Senate, their only constitutional mandate.

Vice presidents were chosen more for perceived vote-getting abilities than because of genuine credentials as public servants—which many had. Even so, an aura of veiled weirdness has hovered over the office for more than two centuries.

In 1788, the U.S. held its first presidential election under a flawed system: The man with the most electoral votes got to be president, and the man finishing second became vice president. President John Adams, elected following Washington in 1796, and Vice President Thomas Jefferson detested each other. Imagine George W. Bush with Al Gore as vice president or an Obama-Romney administration, and you’ll understand.

In 1800, Jefferson and Adams faced off—the first time two former vice presidents mutually sought the presidency. But Adams finished third while Jefferson and Aaron Burr tied with 73 votes each. Burr had agreed in advance to serve as Jefferson’s vice president, and that’s how things ultimately worked out.

Jefferson’s near-disaster led to the passage of the 12th Amendment, which required electors to cast separate votes for the two offices. This spared us, up to a point, acrimony between the two top office holders. Since the first vice president was elected in 1788, a motley of murderers, traitors, bribe takers, and outright crooks have paraded through the vice presidency. What’s more, during the 224 years between 1788 and 2012, the office has stood vacant on 18 occasions for a total of almost 38 years.

The nation survived not only those 18 vacancies but also the 10 and one-half vice presidents we examine below. Our third vice president, Aaron Burr of New York, set the tone of lunacy that so often defines the office. Burr killed Secretary of the Treasury Alexander Hamilton in an illegal duel and got himself charged with murder in both New York and New Jersey. After leaving office, shady land deals in the western wilderness got him charged with treason. He was never convicted of either crime. How do you get one-half of a vice president? John Tyler of Virginia did it this way. He was the “too” of the 1840 campaign slogan, “Tippecanoe and Tyler Too.” The “Tippecanoe” half of the ticket was William Henry Harrison who spoke for three hours at his rainy inauguration, caught pneumonia, and died 31 days later, making Tyler our shortest-serving vice president.

Incredibly, though the Constitution provided for a vice president, it did not state expressly that the vice president would assume the office of president following a chief executive’s death. A quick-acting Congress rectified this … in 1967.

Before even being elevated to the presidency, Tyler signaled his lack of interest in his elected position. In fact, immediately after Harrison’s inauguration, Tyler left Washington and didn’t return until he was summoned at the president’s death. On his return, Tyler resisted congressional attempts to name him “temporary” or “acting” president and served almost a full term as a no-asterisk president. In that post, however, he was unremarkable and historians have called him weak. He so alienated his party that he was denied its nomination for the election of 1844. Millard Fillmore, who became chief executive in 1850 when President Zachary Taylor died of natural causes, was the first vice president of urban legend, though not until 43 years after his death. In a 1917 column, humorist H.L. Mencken wrote that Fillmore had introduced the first bathtub into the White House. This was an outright hoax, but people believed it, then and now.

Mencken came clean in 1949, but the story remains alive. As a part of “Fillmore Days” in Moravia, New York—near Fillmore’s birthplace—wheeled bathtubs race through the city’s streets. 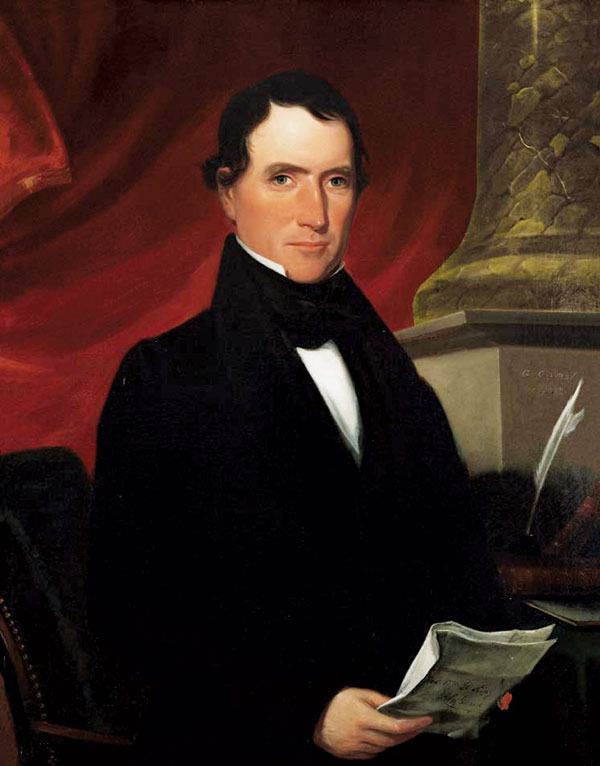 King served only slightly longer than Tyler. He was elected with Franklin Pierce in 1852 and served 46 days before expiring. King is best remembered as our only bachelor vice president and as the longtime roommate of James Buchanan, who in 1856 became the only bachelor elected president.

The Buchanan-King duo was known around Washington as the “Siamese twins,” and President Andrew Jackson referred to them as “Aunt Fancy and Miss Nancy.” King’s brief tenure, not his private life, places him on our list.

A footnote to the bachelors: Buchanan’s vice president, John C. Breckenridge, finished his one term and left town in 1861 to join the Confederates. He was one of two vice presidential turncoats, the other being Tyler, who served as a Confederate legislator. Johnson, a Tennessee Democrat and a tailor by trade, ran with Abraham Lincoln in 1864 on something called the National Union ticket. He got things rolling by showing up apparently inebriated for his inauguration. (Honest Abe later said, “Andy ain’t a drunkard”—possibly the only time a president publicly defended a vice president.)

When Lincoln was assassinated in April 1865, Johnson took office and found himself at loggerheads with the Republican administration. A former slave owner, Johnson displayed few concerns for the rights of recently freed slaves and was ultimately impeached by the House and put on trial in the Senate.

Johnson avoided expulsion by a single vote and in 1868 joined the growing parade of vice presidents who gained the presidency but were denied their party’s nomination. Selected to run with Civil War hero Ulysses Grant in 1868, Colfax had previously served as Speaker of the House of Representatives. Grant, 46, and Colfax, 45, formed the youngest team ever to run for the two offices until Bill Clinton and Al Gore ran in 1992.

A native New Yorker and friend of editor Horace Greeley, Colfax took Greeley’s advice and moved west to South Bend, Indiana. He served as a U.S. Representative from his adopted state. During Grant’s first term, Colfax’s involvement in the Crédit Mobilier of America railroad scandal transpired. (Ironically, Colfax would later drop dead on a railroad station platform after walking three-quarters of a mile in subfreezing Minnesota weather.) He was not nominated for a second term.

He was the first of two vice presidents to preside over both houses of Congress, the other being John Nance Garner. Appropriately enough for a vice president, he was a member of the International Order of Odd Fellows.

Colfax is buried in South Bend, one of four vice presidents buried in Indiana. Keeping their distance, the others are buried at Crown Hill Cemetery in Indianapolis. Arthur came to the vice presidency in a cloud of controversy. He’d been removed from his post as collector of the port of New York 10 years earlier amid charges of corruption. But once in the White House, Arthur is credited by most historians as a reformer. None other than Mark Twain praised his presidency. But the high-living, overweight gourmand would not serve a second term. After learning he was dying of kidney disease, Arthur made only a half-hearted attempt to secure his party’s nomination, and he left office in 1885. Dawes could not get along with his boss Calvin Coolidge and refused even to attend cabinet meetings. The first time he addressed the Senate, he made a speech denouncing the way it conducted business. Later, he napped through a decisive vote, which resulted in a Coolidge appointee losing his job. Dawes is one of two V.P.s to receive the Nobel Peace Prize. (The other was Teddy Roosevelt.) Dawes received his accolade in 1925 for the Dawes Plan, aimed at restoring German economic equilibrium after World War I. It ultimately did not work, but he got to keep the prize. (1953-1961)
Richard Nixon, elected with Dwight Eisenhower in 1952, gave generously to the dusty storehouse of vice presidential trivia. Asked what Nixon’s principal contribution to foreign affairs was, Eisenhower replied, “If you give me a week, I might think of one.”

To be fair, some historians would counter that Nixon did a good job presiding over Eisenhower’s cabinet for six weeks while the president recovered from a heart attack. (See “Richard Nixon—A Great President!” The Contrarian View, Nov/Dec 2012.) Nixon was the only vice president to be elected president after leaving office and suffering through two opposition presidents: Kennedy and Johnson.

When Vice President Spiro Agnew resigned following a bribery scandal in 1973, Nixon appointed Gerald Ford of Michigan to the post. Then, when Nixon himself resigned in the wake of the Watergate scandals, Ford became president and appointed Nelson Rockefeller vice president.

The presidential nomination of a vice president—who went missing for whatever reason—was not possible until 1967 when the 25th Amendment to the Constitution was ratified. Spiro Agnew oozed onto the political scene with Nixon in 1968. A former governor of Maryland, Agnew was the first vice president to serve his master as an attack dog, and relished uttering such phrases as “nattering nabobs of negativism” to define the Washington press corps. As we have seen, the press had the last laugh. Dan Quayle, the fifth vice president elected from Indiana, first got himself roasted in the 1988 vice presidential debate by Democrat Lloyd Bentsen: “You’re no Jack Kennedy.” He then went on to publicly misspell “potato” as “potatoe.” Investigation later revealed that he’d been given a flash card containing the errant spelling, but the damage was done.

Quayle, a sitting U.S. Senator, took office with George H.W. Bush and was somehow invited to run for a second term. In Quayle’s hometown of Huntington, Indiana, stands the Quayle Vice Presidential Learning Center. According to Roadside America, visitors can view such exhibits as Dan Quayle’s grammar-school report cards (Bs and As, thank you very much) and one of Millard Fillmore’s hats.

Were there any good vice presidents? Beginning with Theodore Roosevelt in 1901, there were a few. And remember that, under the original electoral system, Thomas Jefferson and John Adams were vice presidents.

Teddy Roosevelt won both the Republican nomination for president in 1904 and the subsequent election. In 1912, he ran unsuccessfully for president with his ill-starred Bull Moose Party (see “100 Years Ago—A Chaotic Presidential Election”). By then, however, he had won the Nobel Peace Prize, served as New York City’s police commissioner, Governor of New York, Assistant Secretary of the Navy, and established himself as a dedicated conservationist and successful reformer.

John Nance “Cactus Jack” Garner from Uvalde, Texas, served as vice president for two terms under Franklin Roosevelt. He is most famous for his definitions of the office he occupied, but he was also a former Speaker of the House and a power in Democratic politics. He might well have become president had FDR not run for an unprecedented third term.

Harry Truman, elected vice president for FDR’s even more unprecedented fourth term, assumed the presidency on April 12, 1945, when FDR died less than three months after the inauguration. Truman was nominated for president in 1948 and elected, but his contribution to the vice presidency went far deeper than personal success.

Truman took office with a minimum of preparation—FDR had essentially ignored him—and found his plate filled with such items as World War II, the atomic bomb, peace in Europe, and Soviet expansionism. He vowed that no vice president should ever again be so blindsided, and he put his own vice president, Kentucky’s popular Alben Barkley, on the National Security Council and otherwise involved him in government.

From Truman forward, some but not all vice presidents ran as men (and one woman, Geraldine Ferraro) considered capable of occupying the presidency. Is it our bad luck or our good fortune that only one vice president, George H.W. Bush (whose linguistic contribution was “Voodoo Economics”), has made it to the presidency in the last 44 years?