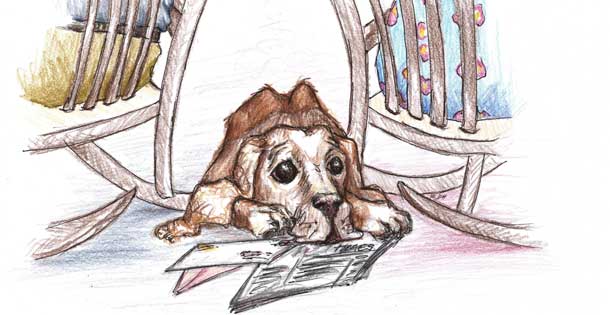 Ralph looked at Agatha, sitting ramrod straight in her rocking chair on one side of the fireplace. Didn’t she know people were supposed to relax in rocking chairs?

Across from her Frank slouched comfortably in his rocker. Now there was a man who knew what a rocker was for.

Agatha mumbled something, leaned forward to look more closely at the afghan she was knitting, and said, “Ralph, it’s time His Honor there took his heart pills.”

Ralph looked at Frank, tilted his head, and made a small noise in the back of his throat.

Frank sighed, lumped himself slowly out of his chair and shuffled to the kitchen cupboard where he doled out pills from three sets of vials. He ran a glass of water, washed the pills down. “Thanks, Ralph,” he said and sat in his chair again.

Ralph snorted, thinking, what would they do without me? They haven’t talked to each other in five years. Ralph was getting on himself, and in good health…but what if he got sick? Who would help them? Would they just stop talking altogether?

Agatha was old and Frank was even older. Still, they kept up the house pretty well. There was plenty of room for the three of them, and a cheerful fireplace on a winter afternoon like this.

Ralph had been very young when he moved in with the Wilsons. It hadn’t been easy, at first; he’d been used to a lot of commotion in the home he’d been born into. But Ralph was nothing if not philosophical about life. Whatever came, came; he just lived with it. And if food and lodging were part of the package, well, so much the better.

Looked like this was going to be an afternoon even quieter than most. Ralph shut his eyes and took a little nap.

“Ralph!” The old man’s voice sharp. “Do your job. You don’t have that much around here to do.”

Ralph yawned, stretched, and headed for the small pile of envelopes that lay inside the front door. He brought them to Frank.

“Thanks, Ralph,” said Frank. He shuffled through the pile, flinging two into the fire. “Damn junk,” he said. “Well, what’s this? A letter for Agatha.”

Ralph took it and laid it in Agatha’s lap, not interrupting her stitch counting. He knew better; he’d been chastised before.

“Ask her what that’s all about,” said Frank, setting his chair rocking. “She don’t get much mail.”

Agatha kept knitting, ignoring the old man. “None of his business, Ralph,” she said. “Never you mind.”

Frank harrumphed and rocked faster. “Long time since I got a letter, Ralph,” he said. “Long time for her, too.”

Ralph closed his eyes again. They’d tell him when they wanted to; he’d deal with it then.

“Well, what do you think of this, Ralph!” Agatha’s voice woke Ralph from a very satisfying dream. She waved the letter toward him. “A family reunion! My side, of course, that’s why I got the letter. Wonder should we go?”

Ralph looked at Frank, who was trying to look uninterested. “Where would her family have a reunion?” he asked the ceiling. “Can’t be but a handful of them left in this world anyway.”

Agatha leaned back in her chair, her knitting forgotten in her lap, and nodded her head. “Mary Apple’s lake house. That’s the very place, Ralph. Couldn’t be better! We’d best call right away, tell her we’ll come. That is, I’ll come. If His Honor there wants to, he can come along.”

His Honor cleared his throat. “If she’s going, I better, too. Otherwise they’ll think I’m dead and she didn’t tell ’em. Mary Apple, huh? She was always a looker.”

Agatha picked up her knitting. “No fool like an old fool, Ralph,” she said.

Mary’s lake place was beautiful. Ralph appreciated the long, smooth lawn that ran down to the clear water, the schussing pine trees that rimmed the yard, and all the running, laughing children that belonged to Agatha’s family. It was fun to romp around with kids again. Living with Frank and Agatha was comfortable but not very stimulating.

Only trouble was, Agatha kept calling him back to the old folks sitting around on the porch. Like she and Frank weren’t whole people unless he was nearby. They talked to everybody else without any trouble; why did he have to be their go-between?

Agatha smiled at Ralph as he came up on the porch. “Ralph,” she said, “remember the time we went down to the Dells? And Frank fell out of the boat when we were going on shore. Got wet right up to his waist, he did. Ha, ha, that was so funny! Frank should tell these folks about it, shouldn’t he?”

Frank said, “Go on back and play with the kids, Ralph, we don’t need you here for this kind of abuse.”

Ralph left gladly. The kids were more fun and at his age he needed all the exercise he could get.

Life settled back into the old dull routine when they got home from the reunion, except for the barbs that flew back and forth through Ralph. The reunion seemed to have loosed a dam of venom over old hurts and slights that had been unspoken for too long.

“And did you see what a simpering silly that old man was around the young girls at that reunion, Ralph? Made a darned spectacle of himself he did, embarrassed me all git out.”

“She said the damnest things to her scruffy relatives, Ralph, you should be glad she didn’t make you sit on that porch and listen.”

“His Honor there drank way too much beer, yes he did, Ralph, and then you couldn’t stop him from telling stories on me! I never—”

“She forgets a lot of what she said, too. But that’s all right, Ralph, people can forgive a senile old woman—”

“Did you hear that, Ralph? Calling me senile. Well just you wait and see if I ever invite him to go along to my family’s reunion again.”

Ralph sincerely hoped she wouldn’t. As time went on, he found himself trying his best to keep clear of the arguments that caromed like the ball in a racquetball game, bounding off Ralph, back to Ralph, to the other opponent, on and on…it gave him a headache. And it made him sad.

He had become a living dartboard impaled day after day with the poison of their accusations thrown against each other.

I’ve been their go-between too long, Ralph thought, and I’m tired to death of the whole thing. He made a plan.

He began to refuse food. No matter how good it looked, how delicious it smelled, he refused to eat.

“This will never do, Ralph,” Agatha pleaded with him as he turned away from yet another plate of home-cooked roast and mashed potatoes. Damn, it was hard to give up that gravy, but it had to be done.

Days passed. Before long, he actually did lose his appetite. Agatha began to cook him special meals, but he just wasn’t hungry. He lost weight, he lost strength.

“Ralph, let’s take a walk, get you out of this house,” Frank said. “You’ll feel better, get your appetite back. If that old woman would cook your favorite stuff, you’d be okay again, wouldn’t you?”

Agatha snorted. “You know I am cooking your favorites, don’t you, Ralph? Don’t you? Don’t listen to him. I’m doing my best!”

Ralph refused. Truth to tell, he was getting too weak to walk far. This plan wasn’t working the way he’d anticipated. He lay back on his pillow and shut his eyes. How many days had it been, now. Was it worth going on?

His eyes flew open as Agatha stamped her foot, looked straight at Frank and said directly to him, “You old goat! Can’t you see what’s the matter here?”

Ralph’s head came up. Was it true? Was she actually talking to the old man straight out? What would he do?

Ralph watched as Frank took a step backwards and stared at Agatha. “You talking to me?”

“You see any other old goats in here?” she demanded.

Frank closed the door and swallowed. “What do you mean?”

Ralph almost jumped up but he was too weak to do it. He watched. Frank had actually spoken directly to Agatha!

“I mean we’ve broken Ralph’s heart, all our bickering, that’s what I mean. I don’t care how bull headed you’ve been for the past how many years, I am tired of playing your game.”

“When? Tell me when! When did I ever make a fool of you?”

Frank lowered his head and said sheepishly, “I don’t remember.”

Ralph held his breath for a long moment before Agatha said, “Well, I don’t either.” She straightened her back. “Can’t you see? We have to work together to get Ralph well, or we’ll never forgive ourselves.”

“Woof!” said Ralph, meaning, give me back that plate of meat and potatoes. Things are looking up.