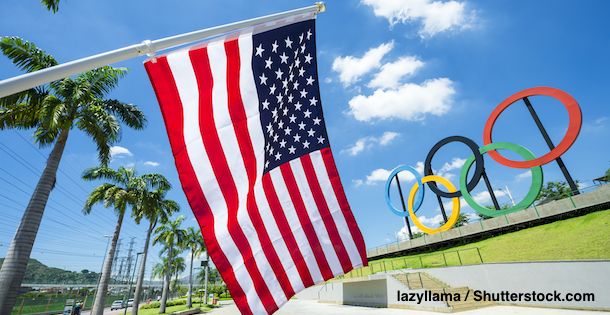 It is the theory of certain somber sportsmen that World War III will begin at an Olympiad. This is not so much hysterical as extreme. The brutal quality of Olympic events brings out the worst in most nations and the combative in all, but the games have been with us, on and off, since 776 BC, and all that happens in the end is that everybody goes home sullen. We should quit this corruptive mess, this sweaty hypocrisy, before the damage to our spirit becomes irremediable.

History teaches that civilization and Tokyo will both survive the forthcoming Olympics. It also indicates that these games, like so many in the past, will be ludicrous, wasteful, filled with petty feuding, small cruelties, and overlaid with a patina of pomposity.

“The Olympic ideal.” We shall have to hear that phrase, played and replayed as if it were a chord from heaven, even though the original Olympic ideal involved pagan worship, commercialism, and the casual murder of women. (Only men were allowed to observe the ancient games. Intruding women were hurled over a nearby cliff.)

A Hungarian water-polo player will attempt to drown a Russian.

A Russian wrestler will thumb a Hungarian’s eye.

A Romanian 800-meter runner will slam his elbow into a Yugoslav’s ribs, hiss “deviationist,” lose his breath and drop out of the race.

A Russian woman shot-putter will say she owes her strength to wheat from the Ukraine, milk from collective cows and faith in the Theory of Surplus Value.

An Indian neutralist will make a speech about sports transcending politics.

A Polish girl gymnast will defect, announcing that she has always wanted to work for the CIA.

A Soviet “assistant coach,” attempting to kidnap the Polish gymnast, will suffer a ruptured disc in the scuffle.

An American distance runner, new to saki [sic], will stand in the middle of the Ginza, Tokyo’s main street, and sing, “Let’s Remember Pearl Harbor (as we go to meet the foe).”

The Japanese cabinet will sputter, totter, and finally right itself as Americans get back to the business of following football (not an Olympic sport).

In Tokyo there will also be footraces, fencing, fistfights, pistol shoots, weight throws, and the marathon. Why a marathon?

It seems that in 490 BC a Greek runner sprinted about 26 miles from the plain of Marathon to the Athenian marketplace with word of victory over invading Persians. “Rejoice, we conquer,” cried the runner. He then died, apparently of a coronary occlusion.

I would say that once is enough. That Greek runner demonstrated beyond argument that a 26-mile run can kill a seemingly well-conditioned man. But Olympic officials disagree. Thus at Tokyo a large field of marathon runners will set forth, followed in automobiles by cardiologists taking notes and officials reminiscing about the courage of the ill-fated runner of the first “marathon.”

If the Olympics were merely ludicrous, merely anachronistic, there would be no point in urging American withdrawal. It is the right of every American to be as ludicrous and anachronistic as he wants, provided that he violates no laws. But the Olympics ultimately are something more. Inevitably they become a political tool.

In antiquity, Nero crashed the Olympics of 66 AD, accompanied by 5,000 personal bodyguards. Oddly enough, whatever event the emperor entered, he won. As the bodyguards cheered, Nero was acclaimed best singer, best musician, best herald and winner of the chariot race. This was simply crude. Refined manipulation of the Olympic Games was splendidly demonstrated in 1936.

Then, as you may remember, the barbarity called Nazism was generally recognized. So to whom were the 1936 games awarded by the International Olympic Committee? Why, to that dandy little sportsman from Austria, wearing brown shirt and black moustache, the crowd-pleasing Adolf Hitler.

Did freedom-loving Olympians protest? The president of the American Olympic Committee stated: “Certain Jews must now realize that they cannot use these games as a weapon in their boycott against the Nazis.” Placards advocating murder of Jews were banned in Berlin while the Olympic Games were going on. But at the very least, the games sanctioned Hitler as a member of the civilized community, which he was not.

The years since World War II have been filled with competition for so-called uncommitted nations and struggles for international prestige. Who has found Olympic fields a perfect stage for propaganda? The North and South Koreans, the East and West Germans, the Formosan and mainland Chinese, and that gentleman from Georgia, Josef Stalin and, later, the ubiquitous butterball from the Ukraine, Nikita Khrushchev.

Soviet invasion of the Olympics began in 1952 at Helsinki. By 1956 in Melbourne, Red athletes were suddenly as good as Americans. By 1960 in Rome, they were better. In all, the Russians, with no Olympic tradition whatsoever, have won more than 100 gold medals in the last three Olympiads.

Two reactions are possible. One can call the Russians a dirty bunch of Communists, who don’t understand amateurism, sportsmanship, and the Olympic ideal. Or one can grow up.

By definition, the Olympic Games are for amateur athletes only. That is incomplete. It next requires a definition of amateurism. … Generally, I would say that an amateur athlete is one who does not accept checks.

A southwestern football player who signs a contract with a university, receives thousands of dollars in academic aid and a fraudulent job from a prosperous alumnus is an amateur in America. A hockey player who earns less than a specified sum is an amateur in Canada. And everybody is an amateur in the Soviet Union because, Soviet spokesmen explain patiently, “No such thing as professional in a People’s State.”

It is difficult to find two Americans who agree precisely on what constitutes an amateur. Is it likely, or even possible, that Americans will agree with Australians, Koreans, and Russians?

In the Soviet state there is no confusion at all. Anyone who might possibly win an Olympic medal at anything is an amateur. Nikolai Sologubov, the Russian hockey captain in 1960, was an army officer who had one military duty: “Play hockey.” He followed orders so well he was made a captain. Igor Ter-Ovanesyan, their best broad-jumper, has been attending a Moscow physical-fitness institute on what sounds like one of the best athletic scholarships in history, as good as anything a Big Ten quarterback enjoys. It includes an apartment and a car; he is a hero of his country and he is getting an advanced university degree for his ability to broad-jump. Understandably, many Americans are outraged at such things. But their fury takes a marathon route to absurdity. Let’s make the Russians toe the mark, they say. If we could, it might make sense to begin with something other than sports — say, nuclear disarmament. But we cannot. Obviously we can’t get the Russians to adopt our economy at large. But further, we cannot get them to accept what we mean by amateurism when we ourselves don’t know what we mean.

I am an amateur softball player. I love to play and I have never accepted a cent for my services, primarily because I have never had an offer. You may be a perfect amateur at golf or tennis. But when someone unlike us reaches an exalted level of competence in America, others become willing to pay “expenses” to watch him play. Did you ever try to explain an expense account to a Marxist?

The Russians are not merely non-understanding. Someone high up in the Soviet state decided 15 years ago that it was time for Russians to show the world their muscles. Result: Muscles became the property of The State. Additional result: Valery Brumel, the greatest high-jumper in the world.

Now, say, Americans, between bickerings about the meaning of amateurism, why can’t we do that? The answer is simple. We have a free society. American muscles, like American minds, are the property of the individual. Any candidate advocating a change would make Alf Landon look like a big winner.

We have, as European borrowers bemoan, a materialistic society. We also have, as no other vast, free nation, a natural inclination to participate in sports. We did not need a president with a bad back to remind us to keep fit. For all the visible flabbiness, Americans from coast to coast are deeply involved in squash and bowling and golf and tennis, and softball games where grown men, wearing shorts, slide home. The brutal sport, boxing, is dying. Without benefit of Olympic nonsense, we are doing fine.

Consider our best athletes. There’s Mickey Mantle, who can hit a baseball higher, harder, farther than an ordinary man will with two swings. Mick is not eligible for the Olympics. Baseball, where many of our great athletes go, is not an Olympic sport. Besides, Mantle commits the sin of earning $100,000. He is thus un-Olympic and corrupt.

Jimmy Brown can certainly run with more determination than anyone else. He plays for the Cleveland Browns, who pay him well. Thus he is not allowed to participate in the Olympics.

Have you ever seen Bill Russell leap to clear a backboard? Russell, the best basketball player in the world, is kept out of the Olympic basketball tournament because Olympic tradition argues that any athlete using his gifts to feed his children is impure. Have you ever seen Willie Mays overtake a twisting line drive, 410 feet from home plate? It is a truly thrilling moment in sport. Have you ever watched Arnold Palmer crash a fairway wood on a rising line dead toward the hole? Or seen Pancho Gonzalez slam an ace into a corner of the service box?

Mays, Palmer, and Gonzalez are three of our finest athletes. At their sports, they are clearly the best in the world. But do they get to compete? Not on your life; instead we have kayak rowing, Greco-Roman wrestling, you name it. We may defeat the Russians at Tokyo, as we defeated the Nazis at Berlin 28 years ago. But if so, what do we achieve? Hitler charged that the Berlin victory, footwork of such stars as Jesse Owens, showed only that the United States employed Black Auxiliaries. To this a Nazi pamphlet added: “Among inferior races, Jews have done nothing in the athletic sphere. They are surpassed even by the lowest Negro tribes.” Thus victory was polluted and turned worthless. If we put the Reds to rout in Tokyo — which is not likely — we can expect similar libels, and we’ll cry “professionalism” if they win.

To what purpose, then, do we continue to compete? Unlike Communist society, we have a free and vibrant literature, complex art, unsubsidized music. These things are functions of the human spirit brave and free. Muscle? Any anemic elephant can lift more than a half dozen men. Marathons? My money would be on stampeding buffalo.

In 393 AD the Roman emperor Theodosius considered the ancient Olympic mess briefly. “Unchristian,” remarked the emperor, a newcomer to the faith, and ordered the games abolished. Presently earthquakes and floods all but abolished the Olympic site in Greece. Zeus was on the wane but he still got across a message from which we can profit.