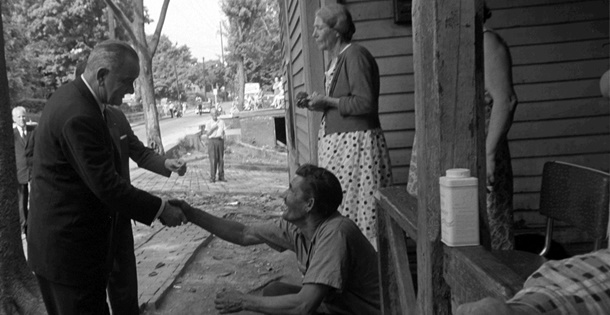 This Post editorial by Stewart Alsop from 50 years ago visits a theme that is still a concern today: pervasive poverty, and how to solve it. Alsop examines — and then quickly rejects — the idea of a guaranteed basic income. The debate continues today. Some economists support this extensive safety net, and others dismiss it.

There is a lot Alsop got wrong: he hoped the “Vietnamese War” would end quickly (it didn’t), that public assistance would soon wind up in the ash can (it hasn’t), and that Lyndon Johnson was a cautious politician (he wasn’t). Whether he was right on the dangers of a guaranteed income are still being debated, and are unlikely to be acted upon anytime soon.

WASHINGTON: It may seem foolishly early to be thinking about the end of the war in Vietnam, and what will come after it. But all wars end someday, and already the Government’s leading thinkers are thinking hard and long about the role of Government in the postwar period. To judge from the way they talk, they are thinking more and more seriously about an idea which at first sounds both madly extravagant and faintly ludicrous. The idea is to abolish poverty once and for all by putting a floor under the income of all American citizens. “The way to eliminate poverty is to give the poor people enough money so that they won’t be poor anymore.” says one Government thinker. “If the war ended, we could do that very easily with the money we’re now spending in Vietnam.” The official Government standard for poverty — a four-person, nonfarm family with an income of $3,130 or less per year — now applies to about 17 percent of the total U.S. population. To give these poor people “enough money so that they won’t be poor anymore” would cost somewhere between $12 billion and $15 billion a year — well under the $2 billion a month that Vietnam is now costing. For about two percent of the Gross National Product, in other words, poverty could be abolished in the United States. All American citizens, as a matter of right, would be entitled to a minimum, non-poverty income. And this is where the proposal begins to sound faintly ludicrous. For “all American citizens” would include the drunks and the drug addicts, as well as bad people, immoral people and just plain lazy people. At first blush, it seems wildly unlikely that any administration will risk a proposal that would reward the undeserving poor as well as the deserving poor. No politician wants to be accused of taxing honest citizens in order to subsidize worthless citizens in the purchase of booze or reefers.

And yet the idea of a national minimum-income guarantee is a perfectly serious idea all the same, which is already being seriously debated by serious men. As always in the Johnson Administration, those in official position are reluctant to be quoted by name for fear of infuriating the President. But there are plenty of men still in the Government who agree with such recently departed officials as Joseph Kershaw, provost of Williams College, and Prof. James Tobin of Yale. Kershaw was until recently chief economist with Sargent Shriver’s Office of Economic Opportunity, and Professor Tobin was formerly a member of the Council of Economic Advisers.

Kershaw says confidently that the minimum income guarantee is “the next great social advance…. In the long run it’s inevitable, it’s got to come.” In a recent magazine article which has attracted much attention among Government economists, Tobin argues with conviction that “the upper four-fifths of the nation can surely afford the two percent of Gross National Product which would bring the lowest fifth across the poverty line.”

The basic idea for a minimum-income guarantee was first put forward by Prof. Milton Friedman, who is the chief economic idea-man for — of all people — Barry Goldwater. Friedman called for a “negative income tax,” to be administered by the Internal Revenue Service, to take the place of all federally subsidized relief for the poor. Friedman must have been surprised, and possibly appalled, when his idea was seized upon, and enthusiastically elaborated, by liberal economists like Tobin.

Tobin gives this illustration of how the scheme might work: “The Internal Revenue Service pays the ‘taxpayer’ $400 per member of his family if the family has no income. This allowance is reduced by 33% cents for every dollar the family earns. . . . At an income of $1,200 per person the allowance becomes zero. . . . At some higher income . . . the present tax schedule applies.”

Tobin, Sargent Shriver and others who have interested themselves in the idea point out that although the scheme would cost a lot of money it would save a lot of money too. Direct public assistance to the poor — federal, state and local — now amounts to about $5.5 billion, and the trend is sharply up. The minimum-income guarantee, in theory at least, would consign the present immensely complex system to the ash can. Virtually all economists, left, right and center, seem to agree that the ash can is where that system belongs.

It is a bad system for several reasons. First, there is the “man in the house” rule. The Aid for Dependent Children program is the biggest of the federally subsidized plans. Under the program, as administered in most areas, aid can be provided to a family only if there is no employable male in the household. The result, as Tobin points out, is that “too often a father can provide for his children only by leaving both them and their mother.” He calls this incentive to the disintegration of family life “a piece of collective insanity.”

Moreover, the “means test” tends totally to kill all initiative. The idea of the means test is that a family will get public assistance only to the extent that it cannot pay its own way. In practice, the result is that a poor man who earns $1,000 toward the support of his family doesn’t profit by a penny, since the $1,000 is subtracted from his relief checks. Under the “negative income tax” system, he would keep part of every dollar he earned.

The means tests and other complicated bureaucratic requirements of the present system tend to turn the social workers who administer the programs, willy-nilly, into part-time spies and policemen. In Negro ghettos, hatred for the administrators of the relief programs is almost universal.

There are, of course, plenty of objections to the whole idea of a universal floor under incomes, quite aside from the vast cost. A program with a price tag of $12 billion to $15 billion might crowd out the “structural” programs — preschool education, job training, slum clearance and the like — which are designed to help the poor escape from poverty. “You’d be treating the symptoms of the disease,” says one critic of the idea, “while letting the disease itself get worse and worse.”

Enthusiasts for a minimum-income guarantee counter that a good doctor treats the symptoms as well as the disease. But the deepest and most instinctive opposition to the idea derives from “the Puritan ethic.” By the standards of conventional morality, it is just plain wrong that a man — especially a bad man or lazy man — should be paid money which he had done nothing to earn by the sweat of his brow. This is why, even to many who like the idea, it seems highly unlikely that Lyndon Johnson will ever buy it.

Lyndon Johnson will certainly not buy the idea while the Vietnamese war continues. He is a cautious politician, and he may never buy it, even if the war ends. But Lyndon Johnson is also a man very conscious of his place in history, and the President who abolished poverty in the United States would certainly occupy a rather capacious niche in his country’s history.