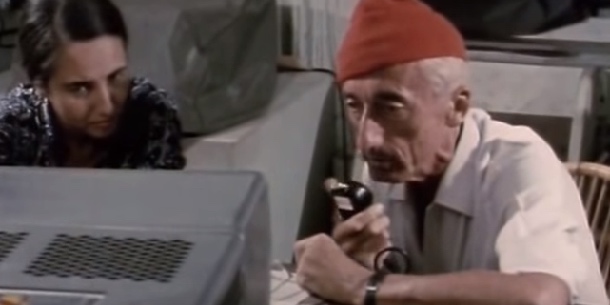 “The Calypso crew and I will be undertaking a series of voyages of exploration and discovery in all the seas of the world,” began Jacques-Yves Cousteau, “we have few rules and no uniforms, only the right cap.” Cousteau was referring to the iconic red knit cap worn by himself and his crew members throughout the television series The Undersea World of Jacques Cousteau. The first episode aired 50 years ago today.

Throughout the 8-year-long ABC series, the Calypso crew explored marine life using techniques and inventions pioneered by “Captain Cousteau.” The premiere episode, directed by Cousteau’s son Philippe, sees the crew studying sharks in various spots around the Indian Ocean. Like Cousteau’s Palme d’Or-winning 1956 feature film, The Silent World, his television series documented ocean life in color and brought the mysteries of the deep to viewers the world over.

The Post’s 1973 profile of the Renaissance man, “The Wet World of Jacques-Yves Cousteau,” discusses the legacy of the “poet, philosopher, painter, inventor, author, linguist, connoisseur of fine wines, and war hero.” The author, James Stewart Gordon, visited Cousteau at the Oceanographic Museum of Monaco and noted, “He talked about his adventures and his fear that present-day industrial wastes pouring into the oceans might destroy all future marine life.”

Amongst Jacques Cousteau’s varied accolades and accomplishments was a nascent environmentalism before such a concern was common. In 1960, Cousteau led a resistance against the French government’s plan to dispose of nuclear waste in the Mediterranean Sea. He worried that humankind had come to view the ocean as an infinitely vast resource instead of a delicate ecosystem that could be overwhelmed by pollution and overfishing. In 1971, Cousteau wrote an article in The New York Times called “Our Oceans Are Dying,” warning about the world’s diminishing coral reefs and claiming “there is only one pollution because every chemical in the air or on land will end up in the ocean.”

Today, Cousteau’s sons, Jean-Michel Cousteau and Pierre-Yves Cousteau, are involved in marine conservation with the Ocean Futures Society and International Union for Conservation of Nature, respectively. They continue the exploratory, educational, and environmental work of their father in the oceans he called “sometimes serene, sometimes savage, and always beautiful.”