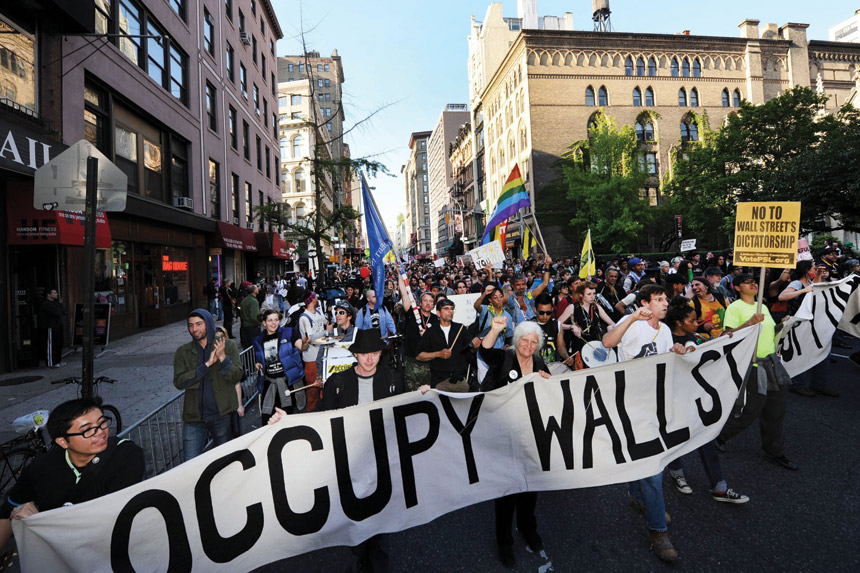 The effects of what would later be termed the Great Recession reverberated for years, even as the U.S. began to climb out of it in the second half of 2009. An unexpected side effect grew out of the economic morass, and that was the birth or revitalization of social movements on both ends of the political spectrum. These activist groups would soon come to exert an oversized influence on elections, social policy, and the country at large.

In the universe of the average American worker — far removed from the madness and greed of the short sellers, the risky credit default swaps of the big banks, and the
monstrous greed of Wall Street in general — the Great Recession was devastating. People lost homes, jobs, everything they’d spent a lifetime working toward. Unemployment rose rapidly: from November 2008 to October 2009, unemployment shot from 6.8 percent to 10 percent. Scholars have noted the subsequent rise in economic activism in the United States. Both the Tea Party movement and the Occupy movement have roots in the soil of the economic crisis. The Tea Party movement found its rallying point in the actions taken by the recently inaugurated President Barack Obama to address the Recession in 2009. Obama’s Homeowner Affordability and Stability Plan, an effort to directly help the homeowners most impacted by the subprime crisis, triggered “big government” resentment that fueled the movement. At the other end of the political spectrum, Occupy sought to address social and economic inequality with protests directed at a financial system that they felt had victimized vulnerable Americans.

Journalist Sarah Jaffe, author of Necessary Trouble: Americans in Revolt, points out that these movements represent the aftermath of the collapse and recession for young Americans. She says, “When you look at young people, you see the effects that it has had. The rise of socialism, of Bernie Sanders in the U.S. and Jeremy Corbyn in the U.K. and Jean-Luc Mélenchon in France, show us that people have now begun to imagine a different world, a world that has very different priorities.”

“The belief by Main Street is that the bankers got away with it, and Main Street paid the bill.”

Robert Johnson, professor of finance from the Heider College of Business at Creighton University, agrees. “While many look at the influence of the financial crisis on the financial sector and the economy, the longest-lasting impact is in the political and social spheres,” he says. “It has divided both this nation and the world and has increased political rancor and further widened the chasm between the right and left — nearly vacating the middle.” Johnson believes that many of the populist movements that have sprung up in America, Europe, and the Middle East came as a “direct result of the financial crisis and its aftermath.”

For its part, the Tea Party movement wasn’t all new. Citizens for a Sound Economy (CSE) was founded in 1984 by Koch Industries heads, brothers David H. and Charles G. Koch; CSE was a conservative political group focusing on lower taxes, fewer regulations, and smaller government. In 2002, CSE launched a (now defunct) website at usteaparty.com that professed opposition to high taxes and what they viewed as an overly complicated tax code. By 2004, CSE had broken into two groups: FreedomWorks and the Americans for Prosperity Foundation.

As the Great Recession continued into 2009, President Obama announced the Homeowner Affordability and Stability Plan; it was funded by the Housing and Economic Recovery Act of 2008 that was signed by President George W. Bush that July. The Obama plan, which would help Americans struggling from the effects of the ­subprime mortgage crisis, was not greeted warmly in many conservative circles. It catalyzed what some felt was government overreach and overspending. In 2009, individual Tea Party events coalesced into a much broader movement. One might be surprised that a government program to rescue struggling homeowners would be perceived as a negative, but as Johnson says, the Recession “led to lost trust and faith in both governments and experts to craft a path forward.”

At the other end of the political spectrum, the Occupy movement took its ire out on the financial system. The Occupy protests kicked off on September 17, 2011, when 1,000 people marched on Wall Street, targeting income inequality and the actions of lenders that led to the Great Recession. Regarding Occupy, Johnson notes, “It can be rightly argued that many of the principals at financial institutions responsible for excessive risk-taking did not bear the consequences of their actions. The belief by Main Street is that the bankers got away with it, and Main Street paid the bill.”

Occupy, itself partially inspired by the Arab Spring and anti-austerity protests around the world, kicked off new protests throughout the U.S. and other countries. The movement was galvanized by scenes of police brutality, including nonviolent protestors being pepper-sprayed on September 24, 2011. More protests occurred in major American cities, with thousands taking part. While the initial thrust had worn off by December, activists spread out and integrated into other groups, addressing income inequality, healthcare, and other concerns.

The Tea Party and the Occupy movement may be opposite ends of the spectrum, but they’re an interesting bellwether for the situation the country found itself in at the 2016 election, and now. Johnson says, “The greatest fallout from the financial crisis is not lost wealth but is a further divided electorate with radically different ideas on the best future course of action.”

What does that mean for America? Common ground may be increasingly hard to find. As Johnson says, “Each side’s view is reinforced by the echo chamber that is cable news.”

It may be melodramatic to say that the crisis that broke the economy broke the country, but the case can certainly be made that the long recovery still has a long way to go.