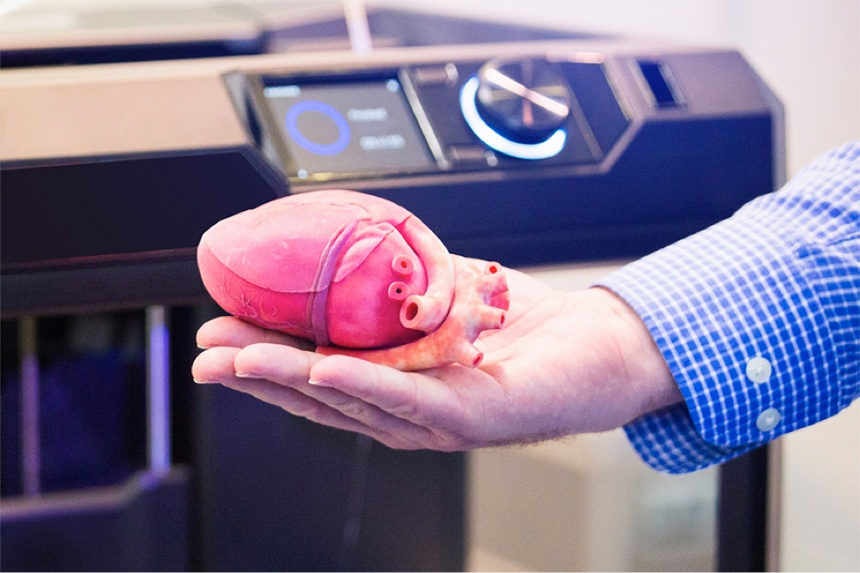 One application can create personalized models of the heart that show individual chambers, valves, and arteries. Exact replicas of a patient’s heart are fabricated based on images obtained from special x-rays or echocardiography. These models are especially useful to surgeons about to repair complicated congenital heart lesions since it gives them a “heads up” of what the heart of a specific patient will look like and how to repair it. They can “practice” their approach on the model before actually operating on the patient.

Medical schools also use 3D cardiac models to teach young doctors about the heart’s anatomy and serve as simulation tools for them to learn and perfect various techniques, such as heart catheterization, device implantation, ablation, and cardiac surgery.

3D models can synthesize various cardiac defects to determine the functional changes resulting from problems like valve leakage or narrowing, calcium deposition, or coronary artery obstruction. Doctors can experiment with novel diagnostic and therapeutic techniques on such models, such as testing new stents or types of valve replacement. If the model is printed with optically transparent materials, doctors can even see blood flow.

Bioengineers can use 3D printers to manufacture innovative hip and knee joints and prosthetic limbs. They can attach living tissue to a scaffold of printed material to test the effects of various drugs.

It might be possible in the future to print entire organs for implantation. Recently, investigators at University of California San Diego created softgel implants and filled them with neural tissue using a 3D printer. The implants were surgically inserted into the severed spinal cord of rats. New nerve cells grew and formed axonal connections across the severed cord to partially restore functional movement in the legs of the rats. The technique is a long way from human application, but it offers future hope to patients paralyzed after a spinal cord injury: 3D printing may help restore limb movement.

I have harped on this topic in the past, but I feel it is urgent to do so again.

Less than twenty years ago, measles was declared eradicated from the United States. Since then, many parents have refused to allow their children to be vaccinated against the disease, permitting the extremely contagious viral infection to become a cause for concern once again.  A CDC report released in October said that the proportion of children receiving no vaccine doses by two years old rose from 0.9% among those born in 2011 to 1.3% among those born in 2015.

The governor of Washington state has declared a state of emergency, with more than thirty-five confirmed cases. An outbreak in New York began in September, with confirmed cases diagnosed in at least 112 people across Rockland and Orange counties and at least 55 in New York City. In 2018, 273 cases of measles were reported, the second-highest number in more than two decades. Disneyland had 147 cases in 2015.

What is most distressing is that measles is not a benign, albeit uncomfortable, disease. One in six hundred children will die from a progressive neurologic deterioration called subacute sclerosing panencephalitis that can suddenly appear in the brain four to eight years after the measles infection. Anti-vaccination conspiracies espoused by people like Robert F. Kennedy Jr. lack credibility. Vaccination links to autism were disproven years ago. Unvaccinated teenagers are rebelling against their parents and are getting vaccinated on their own. (Washington Post Feb 10; Alex Horton).

Do not delay. Be sure that your children are vaccinated against measles and other diseases, including the flu. Do so today! Their lives can depend on it.