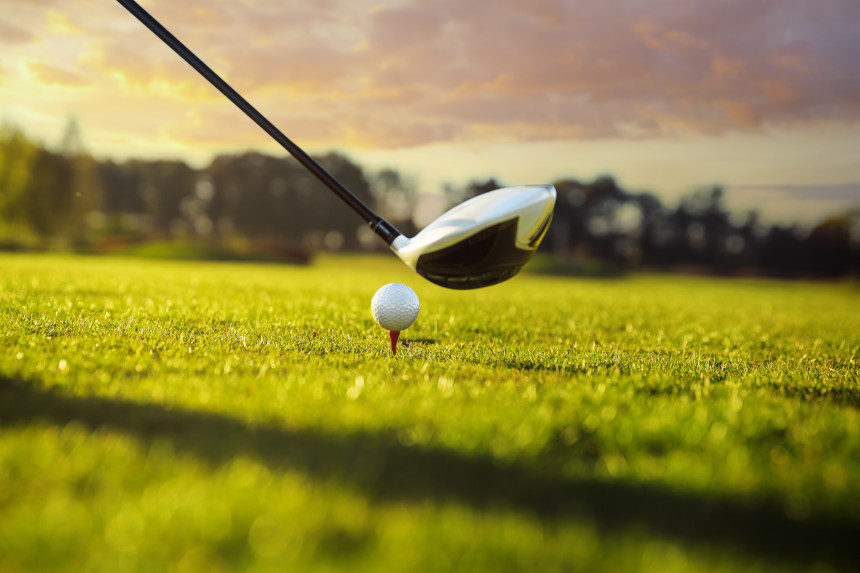 Stanley teed up his Titleist, addressed the ball, and then settled into his stance, his 46-inch driver steady, his breathing controlled. He felt the power in his swing and a solid connection. The ball arched skyward, heading straight down the fairway of the par-five eighteenth. Then it disappeared.

“You got it spotted?” Stan yelled to Mel.

Mel stood near the golf cart, supporting himself with two aluminum canes. “A straight shot, 210 yards. You can still smack that damn ball, Stan.”

“Yeah, but too bad my eyesight is kaput and I need a duffer like you to spot for me.”

“At least my eyes work … and when I could play I’d beat your ass.”

“You’re right, you’re right. I’m just glad you come out, even if it’s just to watch me chase par.”

“Hey, it beats daytime TV,” Mel said and chuckled, “but not by much.”

Both men laughed. Mel moved toward the cart, his hands shaking with the palsy of Parkinson’s disease. Stan helped his friend into the seat. The L.A. Basin’s cold November air burned Stan’s bare arms and he pulled on his jacket and helped Mel zip up his own.

They’d been playing golf together for over 35 years, beginning as two seasoned businessmen with kids gone and the blush of romance off their marriages. At first they’d been outliers at the club, Mel gnomish and Jewish, playing with a set of clubs that looked like they were made for a 12-year-old girl. Stan stood out as too tall, Black, with a weird upper lip. But as time passed, the end-of-the-alphabet generations changed things and Tiger Woods made front-page news. The funny-looking duo faded into the crowd. When Walter Nguyen joined them, they had most of the diversity bases covered, at least for old guys.

The cart bumped down the path toward that afternoon’s final strokes, then the hour spent at the clubhouse’s bar, exchanging family news and recalling past games and the people they had shared the courses with.

“I heard from Walter yesterday,” Mel said over cocktails.

“Well, you know he’s not much for words. His emails are always short.”

“Still living with his oldest son’s family in Seattle?”

“Yeah, they built him a little grandpa unit attached to the house. He takes the bus downtown to the library and hangs out at the Pike Place Market.”

Mel turned on his stool to face Stan, in the process knocking one of his canes off the lip of the bar. It clattered to the floor. Other golfers seated at tables stopped chattering and stared.

“I’ll get it, I’ll get it,” Stan murmured and slid from his stool and retrieved the cane. The rumble of conversation returned.

The two sat silently for moments before Mel spoke. “My daughter wants me to come to Medford for Thanksgiving.”

“That should be fun … Turkey Day in the great north woods. And you guys get along great.”

Mel sucked in a deep breath. “And she wants me to stay with them.”

“Yeah. They’ve got a big place and … and I’m gonna need more help. You know it’s been tough since Lilly died.”

“I know, Mel. But Jesus, why are all my friends moving north? Doesn’t anyone like the SoCal sun anymore?”

“I’ll miss this.” Mel motioned with trembling hands to the room and the golf course. “And I’ll miss you.”

Stan took a gulp from his scotch and rocks and stared at his hands. “When are you leaving?”

“Thanks, but Sonia has arranged for a car.”

“Hey, don’t look so glum. You’ve still got Shirley and the grandkids. They’ll keep you busy.”

“You forgot to mention you’re ugly too,” Mel cracked.

On the tedious drive home, Stan thought about the time when he first started playing golf. Men in narrow-lapelled suits and ties would arrive and change in the locker room into clothing equally as ugly. They’d stare at him without saying anything. Junior executives chatted up their bosses, made connections with possible clients, cut deals, drank too much afterward and dreamed about the day they would ace the par three fourteenth or break 90. It all felt staged, as if a prelude to something else. Then Stan had met Mel and Walter, two guys who loved golf. They formed a pact: no business talk while on the course; no complaining about wives or kids; just focus on the game and enjoy the days.

In the weeks after Mel left, Stan’s wife and daughter-in-law kept him busy with deferred home improvements and with babysitting the grandchildren. But after a time, he found himself slouched on the sofa, watching endless CNN news while Shirley complained about him being underfoot.

On the day that his wife’s quilting group filled the house with raucous gossip, he escaped in his Toyota to the golf course. His shoulders had stiffened and now hurt from inactivity. He reasoned that spending time at the course’s driving range would do him good. He bought a bucket of balls and spent the morning smacking them into the distance while his mind recounted the faces of friends he had played with and what they had done with their lives. He thought about playing a solo round but knew that without Mel it would take him all afternoon just to finish the front nine.

One crystal-clear February morning with the San Gabriel Mountains dominating the horizon, Stan hit balls past the blurry yardage markers. A guy two stations down turned and grinned.

“You’ve been clobbering balls since I got here, past the 200 marker. Were you ever on the tour?”

Stan laughed. “There were no Black men on the tour when I was younger. Plus I’ve never been that good. I’m just an amateur trying to work on my drives.”

“My name’s Mateo. I haven’t seen you hit the links … and I play here three times a week.”

“I’m Stan. A few months back I lost my golf partner. He was … was my spotter. My distance vision is shot.” Stan tapped one of his eyes and grinned.

“Had them removed years ago, but neither surgery nor glasses fixed the problem. When I hit the ball, it disappears on me.”

“That’s a shame, ’cause you have a fine swing. So what happened to your golf partner?”

“Got old, like me. Went to live with his daughter’s family in Medford.”

“My wife and I have been thinking about taking mi madre in. She’s a widow and getting up there. We’ve got plenty of room, even with the kids.”

“That’s kind of you. And anything’s better than a nursing home. You’ll find out soon enough.”

“Yeah, you’re right,” Mateo said and chuckled. “So … do you want to play a round with me? I can be your spotter and you can show me how to improve my drives.”

“Sure, Mateo, sure. Let me reserve a tee time. How about this Wednesday afternoon at one, if your work schedule allows it?”

Mateo grinned. “I own the company, so I work around golf rather than vice versa.”

“What’s your line of work?”

Stan nodded sagely, glad that he had retired from the business world before computers and their complex technologies took over.

Wednesdays became Stan and Mateo’s regular date. Mateo played well, a bit inconsistent with his drives but a much better putter than Stan. And he made a wonderful spotter and caddie, commenting on wind conditions and yardage to the pin, helping Stan select the right club.

Spring rains had greened the hills, and summer felt within reach. Stan and Mateo approached the par-three fourteenth hole. Stan grasped his driver.

Mateo watched him tee up. “You gonna lay up like you normally do?”

“Yeah. I can get on the green in two and make par.”

“Why don’t you try something different.”

“Just hit a killer drive and get on the green.”

“I’ve never been able to do that. And if I overshoot the second stroke, it’s into the canyon and a two-stroke penalty for a lost ball. Done that plenty of times.”

“I know, I know. You can do it, just need to focus, get your head straight.”

Stan laughed. “Not really my strength.” He settled into his stance, breathed in and out. No cross wind. Silence. More silence. As if watching someone else, Stan saw his driver swing back in a perfect arc, felt the forward acceleration, the collision, and the follow-through.

The brakes of a golf cart squealed.

“Son of a bitch,” Mateo growled.

Annoyed, Stan turned and glared at the two visored ladies in their cart near the women’s tee box, talking, as if they owned the place. Hell, maybe they did.

“Sorry, Stan. I lost it when those two pulled up.”

“No … your ball could be anywhere.”

“Can we play through?” one of the women called.

“NO!” Stan and Mateo shouted in unison.

Mateo found his ball 160 yards out. His second stroke easily made it onto the green. Stan’s ball had disappeared.

“Why don’t you take the rough and the fringe to the center and left of the green and I’ll circle around to the right,” Mateo suggested. “We’ll meet on the far side and check the rough.”

Stan chuckled. “If it went that far, it’s down in the gulch with the rattlesnakes and scorpions.”

The pair carefully searched the areas leading to the green, its fringe, and beyond without success. Stan had just about given up when he turned toward Mateo. His partner stood at the pin, a grin splitting his brown speckled face.

“Hey compadre, what kind of ball you use?” Mateo called.

“You mean one like this?” Mateo bent and plucked a golf ball from the cup.

“Yeah, just like that. Quit fooling around, will ya?”

Mateo laughed. “No joke, man. You just aced the fourteenth.”

Stan’s mouth dropped open. In a daze, he finished the round. Mateo rambled on about how he knew all along that the drive had headed right for the pin and crowed about Stan’s round of 87.

“You were really on today, man. Must o’ been my expert caddying, heh heh.”

“Yes … and thanks for … for pushing me. I didn’t realize I’d gotten used to doing the same thing over and over.”

Mateo smiled. “Yeah, the older we get the harder it is to take risks, even with a game like golf.”

At the clubhouse, Mateo declared Stan’s acing of the fourteenth. A cheer rose from the crowd and grew louder when Stan announced a round of drinks for the house. The bartender retrieved his iPhone and snapped a photo to be placed on the wall along with dozens of other grinning golfers that had scored a hole-in-one.

By the third round of drinks both Stan and Mateo slurred their speech, leaning on the bar with both elbows. Finally Mateo clapped Stan on the shoulder.