From luminaries like Stan the Man and Yogi Berra, to kids playing sandlot ball, The Saturday Evening Post knew no equal when it came to great baseball covers. Who doesn’t love Yogi Berra? Long before he became famous for maiming the English language, Berra was catcher for the New York Yankees. Artist Earl Mayan got him to pose in Yankee Stadium for this cover. Love the fan faces! The editors informed us they were friends of the artist and “were real nice-looking people till he asked them to look like baseball fans.” Bottom of the Sixth  (Three Umpires)

[From the editors of the April 23, 1949 issue] This week’s Norman Rockwell cover depicts Ebbets Field, the home of the Brooklyn Dodgers. Here, the Dodgers are trailing the Pittsburgh Pirates 1-0 in the sixth inning. If the arbiters—left to right, Harry Goetz, Beans Reardon and Lou Jorda—call the game because of rain, the score will stand as is, and Pittsburgh will win. This irks the Brooklynites, who dislike having other teams win. In the picture, Clyde Sukeforth, a Brooklyn coach, could well be saying, “You may be all wet, but it ain’t raining a drop!” The huddled

Pittsburgher—Bill Meyer, Pirate manager—is doubtless retorting, “For the love of Abner Doubleday, how can we play ball in this cloudburst?” 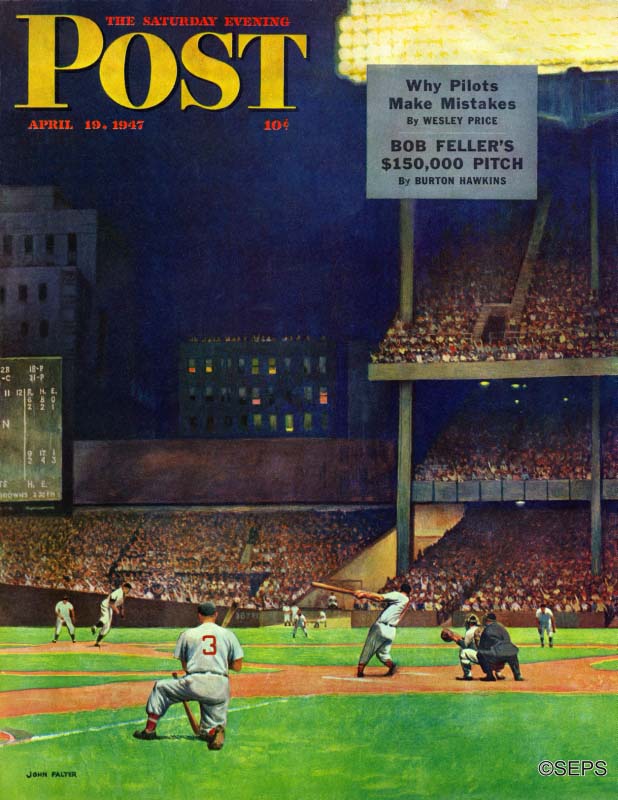 Not only did these St. Louis kids have to miss school (awww!), they had to sit and pose with Stan the Man Musial. What a rough life. The lucky youngsters wound up with forty Musial autographs. “Wow!” one said in awe. “Will we clean up selling these at school!” We’re sure at least one of them has wished he’d kept it. Artist John Clymer was known for his beautiful landscapes. Sure, he manages here to paint Oregon in all its spring glory, pink blooms, Mount Hood and all. But the eye is drawn here to the fine pitching form of Miss Pigtails and the concentration of the batter. The trees may be budding and the grass greening, but kids’ thoughts turn to baseball. It must be spring! While we admire the pros, there’s nothing like a family baseball game. It’s 1950 and Uncle Baldy can’t decide whether to pitch or throw to Aunt Sally in the yellow dress on second base and catch the guy out. We have to say Aunt Martha’s batter’s stance is interesting. The editors speculated that the umpire was selected “because he has a natural chest protector”. Well, a natural belly protector, anyway. It’s no surprise that they played baseball in 1910, as we see in this cover. What surprised us was the artist – none other than Anton Otto Fischer. Mostly famous for his masted ships rolling over foaming waves, Fischer also was great at painting people. This slice-of-landlubber-life captures the action perfectly. Interesting catcher’s mitt!