Throughout the 1940s, artist Mead Schaeffer painted dozens of covers for The Saturday Evening Post, many featuring men hard a work in factories and fields. Here are a few of our favorites.

If you’d like to see all of The Saturday Evening Post covers and read the pages of these and other issues from our archive, become a member. Mississippi
Mead Schaeffer turned south to Biloxi and its shrimp-fishing fleet. As one who sees shrimp most often in a cocktail, served pretty sparingly, the artist was slightly staggered by the size of the fleet and the volume in which they bring shrimp to the packing houses. 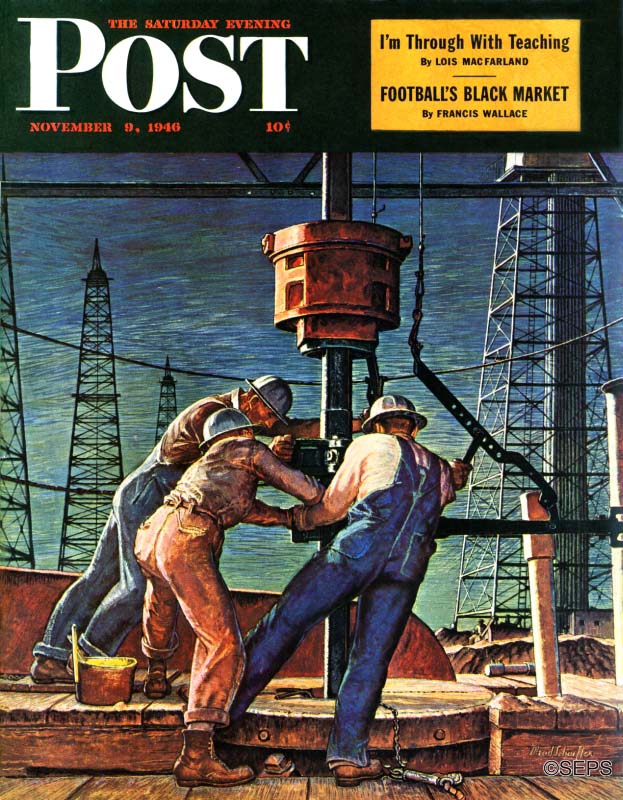 Oklahoma
Artist Mead Schaeffer and his wife worked near Oklahoma City, Oklahoma, for Schaeffer’s oil country cover—if you can call it ” working.” Had they come to town on a vacation, they couldn’t have had more of a social whirl. Their plane arrived just before sunrise and, much to the Schaeffers’ surprise, the fire chief’s red car was waiting. So was the mayor, who read a proclamation declaring them welcome and offered a key to the city. The Schaeffers found every minute they could spare had been booked for social engagements, and this was true throughout their stay. It was by all odds the warmest reception the Schaeffers have met in their travels working on Post covers, and they went away as impressed with Oklahoma courtesy as with Oklahoma oil. Texas
“The cowboy carrying his pet saddle to his plane is an everyday sight in the West,” artist Mead Schaeffer wrote when he delivered this painting. “Many a rancher lives in town and commutes to his ranch or ranches by air. The tableland makes landing fields all through the West, and because of the long distances involved, the West takes to planes the way the East takes to cars. Many a business engagement, even luncheon engagements, are kept this way.” One of the flying ranchers, Lee Bivins, was Schaeffer’s model. The background is the airport at Amarillo, Texas. A power failure on a rural line was a serious matter calling for fast repairs. For this cover painting, Mead Schaeffer spent several days trailing a line crew based at Bennington, Vermont. His picture shows the foreman, Howard Stevens, at work at a junction where a branch line meets a main. The job Stevens is beginning is that of “taking up slack in a long-span secondary wire”; he is attaching a block and tackle which will pull the wire tight. The wires of the branch line and that just behind the lineman look oversize because they have been covered with rubber
hose, for safety. The canvas bag carries tools from the ground. In case you wonder how an artist knows where to go to find exactly the scenery and characters he needs, you may find a partial answer in the history of this painting. A couple of visitors from Maine dropped into Mead Schaeffer’s home in Arlington, Vermont. Schaeffer told them he hoped to get up their way soon, on a search for material. He was going to paint a lobster-fishing picture, as lobster fishing is done in families where father teaches the skill to son. The visitors listened to a long description of just what Schaeffer wanted, and should have been
impressed with an artist’s willingness to search the whole seaboard for precisely the right spot. But all they said was: “Port Clyde.” Mead went to Port Clyde, Maine, and found exactly
what he wanted. His models were Alvin Chadwick, of Port Clyde, and Chadwick’s grandson. This cover coincided with the wheat harvest in the famous North Dakota-Minnesota Red River Valley. Usually the Red River Valley “run” was well under way around mid-August. Mead Schaeffer, conditioned to small patches of Eastern wheat, was amazed by the endless golden seas of Midwestern grain. One day, in the fields, Schaeffer wondered where everybody’s lunch was coming from, and an airplane appeared, bringing same. Throughout World War II, Mead Schaeffer painted numerous covers of soldiers in the field of battle, from this battery commander to ski patrol soldiers, fighter pilots, medics, and signal corpsmen.