It seems elections bring out the worst and best America has to offer. These classic Post covers capture the hope, hostility — and humor — when it’s time to go to the polls. First Vote in the New States Then as now, political campaigns were hard-fought and exhausting. In Elect Casey, we find the “people’s choice” collapsed in stunned defeat after a phone call has delivered the final vote count. The model for Casey was Bernard T. Casey, a Boston Democrat who had served eight terms in the state legislature. He’s for Dewey; she’s for Truman. The baby, the dog, and the cat are for peace. The Rockwell classic “was always one of my husband’s favorites,” said Bess Truman, who spoke of the original painting that found its home, appropriately, in the Truman Library. “He enjoyed showing it to visitors when they toured the library’s museum.” In real life, the candidates were two of Ben Prins’ Connecticut friends: Andrew Squires (D) and John Donaldson (R). Squires was a town selectman and Donaldson was in the state House of Representatives. Speaking of pulling levers, it’s too bad those truck drivers didn’t do it sooner. Just a year earlier, Rockwell had completed his famous series of paintings that depicted the Four Freedoms that President Franklin D. Roosevelt had spoken about in his January 6, 1941, speech to Congress. A year later, Rockwell’s take on democracy was much more whimsical. Perhaps he was feeling more positive: the Allies were on their way to winning World War II, and Rockwell’s Four Freedoms had raised $132 million to support the war effort. The 1940 election pitted incumbent Franklin D. Roosevelt against Republican Wendell Willkie. Roosevelt won his third term by a comfortable margin, partly based on his promise to keep the United States out of foreign wars. Artist John Hyde Phillips portrayed the contest as a game of checkers, although today’s strategists would probably liken modern political races to chess (or maybe Balderdash). 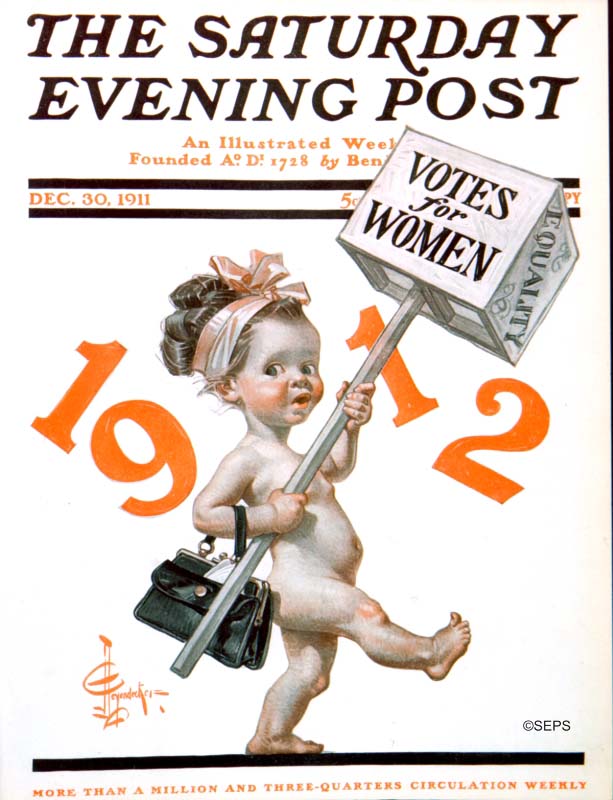 For 37 consecutive years, J.C. Leyendecker welcomed January 1st with a Post cover featuring one of his famous New Year’s babies. Often, the cover was a reflection of the times: The 1910 New Year’s baby flew a new-fangled biplane; the 1914 tot rode a ship across the Panama canal. The precocious infants were aware of Prohibition and worried about the first global war and the Great Depression. Our 1912 baby was ahead of her time; women didn’t get the vote until 1920. The election of 1920, in the aftermath of World War I, brought Warren G. Harding vs. James M. Cox. The newspaper she holds shows Rockwell’s talent for portraiture—that’s his depiction of Harding, not a photograph. In later years Rockwell’s political portraits would include Humphrey, Goldwater, Eisenhower, Stevenson, Nixon, and Kennedy. The U.S. ratified the 19th Amendment on August 18, 1920, giving women the right to vote. McMein, a long-standing suffragist, helped the Post be ahead of history when this cover published March 6, 1920.