No Sweat Tech: 9 Easy Ways to Create an Avatar

The Internet’s weird. On one hand, we’re supposed to be very careful about our privacy and what we post online. On the other hand, every social media site expects us to post pictures of ourselves as our account avatars.

So what if you don’t want a bunch of pictures of yourself on the Internet because you’re concerned about privacy? Or what if, like me, you’re camera-shy and don’t like having your picture taken?

A standard solution is to let a picture of something else take your place — one of your pets, or a logo, or maybe a favorite flower. But you don’t have to skip out on representing yourself just because you don’t want to put up a picture. You can make an avatar.

An avatar is a visual representation of you. It can be serious, or cartoony, or funny, or whatever. There’s one avatar app called Bitmoji that lets you make a character and then do all kinds of poses and messages with it. We won’t be talking about that one in this article, because it’s for smartphones only. Instead we’ll be looking at Web-based applications — nine of them — that allow you to make a picture of yourself to use on social media. There are three non-silly ones, one mostly-non-silly one, and five pop culture / silly ones. Hey, it’s the Internet: we’re into cats pounding on pianos and pugs rolling down hills. You’ve got to make plenty of room for silly.

A note about image formats: most of the sites allow you to download your completed avatars as PNG files, which is a common image format file and should work on any social network. Some offer JPG, which is also fine. Don’t choose the SVG format unless you know what you’re doing. Avatar Maker isn’t the most complicated or feature-packed site on this list, but it’s simple and quick. Start by specifying whether you want to build a male or female avatar, and you’ll get basic options for face, eyes, hair, and clothes, with some subcategories of options for things like glasses, eye shape, nose, eyebrows, etc. There’s also a selection of abstract backgrounds if you want something a little more snazzy than a solid color.

Once you’ve designed the avatar to your satisfaction, you can download it as a PNG image file in one of two sizes, or download it as an SVG file. I had some fun playing around with Avatar Maker’s “Random” function, which does just what it sounds like and generates avatars randomly. It helped me learn more about some of Avatar Maker’s functions. Get Avataaars is even simpler than Avatar Maker in that it you don’t have to specify male or female before you start making your avatar. And that’s why I think this is the best choice for non-binary or genderfluid users: you have a lot of choices here. Want to have a Mia Wallace-style bangs-‘n’-bob with a moustache? No problem. I’m not sure it’s intentional, but the developers have done a pretty good job making this gender-neutral.

It’s simple to use, too; there’s a series of drop-down menus you use to specify each of your avatar’s features. Sometimes how the feature is described is a little confusing (there’s no “hair” option; instead there’s “top,” as in top-of-head) but as your choices are reflected instantly on the avatar it’s not difficult to figure out. You can download your images as PNG or SVG. 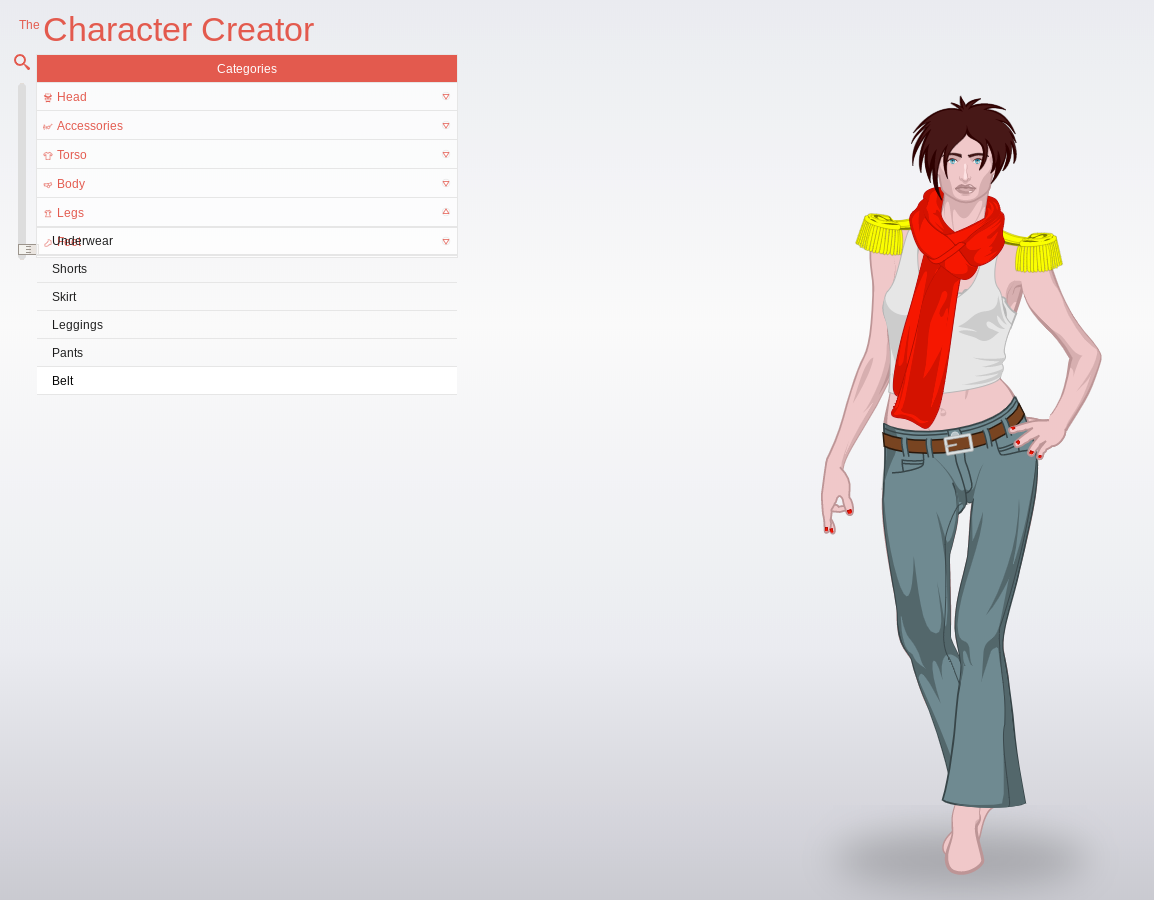 Generally social media avatars only show your face, or perhaps your head and shoulders. But maybe you want a full-length avatar? That’s where Character Creator comes in. Here you can choose a full-body male or female and then customize them with a clothing selection that’s all over the place (there are only a few styles of top for a female character, but you can have epaulets) and a bewildering array of facial expressions (most of which seem to reflect negative emotions).

There doesn’t seem to be a way to customize the default-athletic body style; you can’t be short or overweight, for example. I suspect users who are Patreon patrons of the site get far more options; regular site users can only download the resulting avatar in SVG format. This site is lots of fun to play with, but you may discover it doesn’t have enough options to generate an avatar you like. Hexatar is like a middle ground between serious avatars and the funnier pop culture ones. If you want something that’s a little different and unusual, but you don’t want to go as far as making a manga or South Park version of yourself, this is a good choice.

The avatars here are more angular and hex-based than the first few choices, but there are still lots of options for building your character. There are tons of eyes, eyebrows, ears (you want square ears? Go for it) and even face shapes. Like Avatar Maker, you can also choose a different background.

The first four avatar makers will create perfectly fine avatars for your social media (well, depending on how silly you get when using them). But if you’re not overly worried about looking “professional” online, you might have more fun with an avatar maker that draws its inspiration from popular culture. Face Your Manga lets you create an avatar that looks like manga, a Japanese comic book style. Manga is popular the world over — for example, Face Your Manga originates from Italy! Be warned that this site uses Flash, and some browsers block Flash content by default. Once you’ve picked the gender of your avatar, you get tons of options for customizing it. And I mean tons. This avatar maker lets you add crow’s feet, or freckles, or a third eye in the middle of your forehead. If you don’t care for that you can add earrings, or piercings, or if you’ve really had a bad day you can make your avatar “flip the bird.”

The breadth of options available with this tool means you can create a perfectly acceptable avatar that you could use for personal and work social media, or you can go the completely gonzo/weird route. (Play with the site’s random feature for a while and you’ll appreciate how crazy the looks can get.) The only thing I don’t like about this site is that you have to provide your email address to download your avatar. I wasn’t thrilled about that, but after checking the privacy policy, I went ahead and did it. Do you remember the Powerpuff Girls? It’s a cartoon series, launched in 1998, that aired on The Cartoon Network. (A series reboot was launched in 2016.) The show features the adventures of three young sisters as they use their super-powers to fight villains and make the city of Townsville safe. The art is very stylized, and that reflects in the avatar maker. The tool is not limited to girls — Powerpuff Yourself also allows for Powerpuff Boys, too (or maybe Powerpuff Dudes?). This is another avatar maker that genderfluid and non-binary folks might like.

The customization options for the avatar’s body are limited to hair (facial and top-of-head), eyes, mouth, and skin color, but there’s also a “Gear” option. There you can add clothing, glasses, shoes, and some accessories. Want your avatar to hold a taco and stand next to an admiring unicorn? No problem. Once you’ve finished your character, you take a little quiz to see what kind of Powerpuff you are, then you can download your avatar with or without a background. Peanutize Me was launched in conjunction with the Peanuts Movie, which came out in 2015. It’s nice to see the tool has been kept up, as generations have followed the adventures of Charlie Brown, Lucy, Linus, and everybody in the gang. It’s even been updated — if you’re not interested in making a human avatar you can also Snoopytize yourself. (Because come on — if you were in the Peanuts universe, you’d want to be the coolest character. Right?)

For Snoopy you can choose small, medium, or large, but for the kids you pick boy or girl. Instead of a list of options the site walks you through step-by-step: the skin color, the hair, the eyes and eyebrows, etc. This is another site that gives you a full-body avatar instead of just a face. The customization options are a little limited, but I really like how the avatar looks when you’re done. The site also makes it really quick to download the avatar as a JPEG image or as wallpaper for your computer desktop’s background.

SP Studio is not an official South Park site, but is instead a tool created by someone who based the look on South Park. And it’s very South Park. You can customize the hat, clothing, face, eyes, hands, etc. With this site you can also add text to an avatar. There’s also an option to add something to your character’s hands, but note that the options include what appear to be alcohol and drugs.

The site can be a little confusing at times, but it makes really cute avatars. The site owner is also constantly adding new material to the site. His latest addition is a set of swimming wear for your avatar to wear during the summer months. Once you’ve finished creating your avatar, you can save it in one of three styles (note the copyright disclaimer, though). Family Guy is just a little newer than South Park, first airing in 1999. If I had to choose a full-body avatar tool, it would be a close call between Family Guy Yourself and Peanutize Yourself. This would probably win because of its downloading options; more about that in a minute. This is another choose male / female setup, only you can choose from two body types: slim, or a bit overweight. There’s an average number of cartoony choices for your avatar: hair, eyes (glasses or no), shirts and pants, etc.

The avatars turn out pretty well, but what I really liked about this tool was set of the download options. You can download a full-body avatar, or just a head/shoulders image like most social media uses. And once you’ve made your choice, you can download a PNG file with one of five different background colors.

You might not feel comfortable putting your picture online, and that’s okay. With these avatar makers you’ve got plenty of different options to express yourself — seriously or not!