Stevan Dohanos, born May 18, 1907 in Lorain, Ohio, grew up as a great admirer of Norman Rockwell, going so far as to copy his Saturday Evening Post cover illustrations in crayon that he sold to friends, relatives, and co-workers.  Little did Stevan know, he would develop a close personal friendship with Rockwell as his own art graced the Post’s cover 123 times over the course of his lifetime.

Dohanos was the third of nine children born to Hungarian immigrants Elizabeth and Andras Dohanos.  His upbringing in a midwestern steel town would later influence the cultivation of his artistic style showing the normalcy and realism of American life.  While inspired by Rockwell’s talent, Dohanos became an “American Realist” who depicted everyday life as it was.  He was most heavily influenced by the work of Edward Hopper, and chose not to idealize American life the way Rockwell did.

Dohanos realized his love of art fairly early in life, selling calendars and illustration copies for $1.00 to $3.00 apiece while he worked in a grocery store and later at an office job.  He began his formal education by taking correspondence classes through the International Correspondence School.  Soon after, the artist took night classes at the Cleveland School of Art where he received a scholarship to complete his formal art studies.

During and after art school, the young Dohanos worked in a Cleveland advertising firm, then travelled around the country painting wall murals before heading to New York City to work as a commercial artist.  He eventually moved to the artist colony of Westport, Connecticut where he found inspiration in the everyday lives of his neighbors.

While working in the city, Dohanos picked up advertising work from clients such as Four Roses Whiskey, Maxwell House Coffee, Pan Am Airlines, Cannon Towels, Olin Industries, and John Hancock Insurance.  His work was featured in Esquire, Medical Times, McCall’s, and Colliers prior to his first successful submission to The Saturday Evening Post.  In September of 1938, he married his longtime sweetheart, Margit Kovacs, and had two children, Peter and Paul.

His first Post cover, the March 7, 1942 issue, was a well-received wartime image of air raid searchlights from an artillery battery.  Throughout the 1940s and 1950s, the artist’s workload for The Post increased, garnering a contract for roughly a dozen covers a year.

During World War II, Dohanos aided the war effort by painting recruitment posters and wall murals for federal buildings.  He also designed stamps for the federal government, starting during the Roosevelt administration, and staying in the profession the rest of his life.

As magazine covers turned toward photography and away from illustration, Dohanos quickly changed careers.  He did film art for such classics as White Christmas and was the chairman of the National Stamp Advisory Committee where he oversaw the art design for over 300 stamps.  He held the position throughout the administrations of 7 presidents and 9 Postmaster Generals.  His depictions include presidential portraits, the now collectible NATO commemorative stamps from 1959, and the 1967 John F. Kennedy commemorative stamp.

Stevan Dohanos found beauty in everyday life, choosing to focus on “the location and trappings of the American dream, not those who populated it.”  Elevated to lofty status as a famous Saturday Evening Post illustrator, Dohanos’s works now garner the walls, halls, and galleries of The Cleveland Museum, The New Britain Museum of American Art, The Pennsylvania Academy of the Fine Arts, Dartmouth College, The Whitney Museum of American Art, and various federal post offices across the United States.  He died July 4th, 1994 at the age of 87. 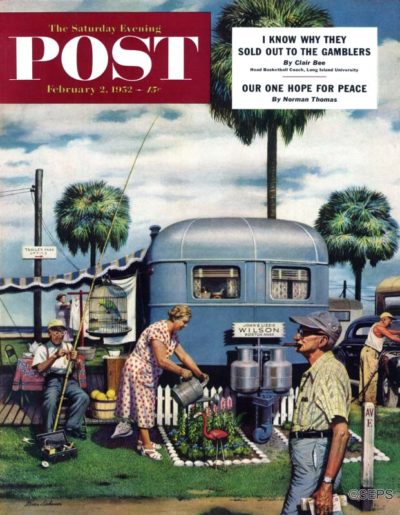 Stevan Dohanos hewed closely to the photo that he used to create this homey Florida scene for our February 2, 1952, cover.