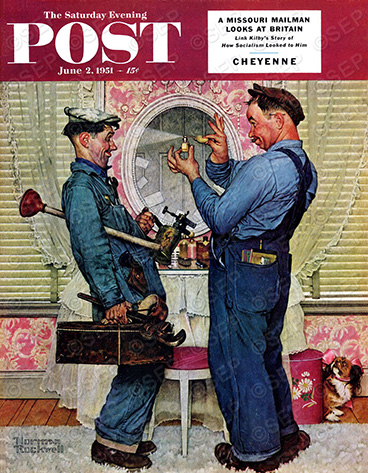 
Classic Covers: Pull Up a Chair

As a prop or a story device, of humble wood or elaborately patterned, artists have furnished their paintings with interesting chairs.

This gorgeous cover from 1923 was by artist Coles Phillips, a friend of Norman Rockwell’s. Phillips was also an illustrator for Life magazine, and his lithe ladies also adorned about 10 Post covers. Here, he found an exquisite backdrop for his lovely model.

Years ago, I fell in love with an antique corner chair similar to this one. Alas, it was out of my price range. I’ll just have to be content admiring this one from a 1909 Post cover. Artist Harrison Fisher did many covers of beautiful ladies, but this one is from a particularly interesting angle.

Where there’s a chair, there’s a woman deciding where best to place it. For the sake of the deliveryman, let’s hope she decides soon. This is from 1942 by an artist named Gene Pelham.

The master of the house is viewing the situation with trepidation. Can’t a guy read his paper and smoke his pipe in peace without some female wanting to change things? This 1940 cover is modern and pretty—a very “un-Rockwellian” Norman Rockwell.

Beware of trying out chairs in antique stores! “After years of observing ancient chairs tremble and sway and utter squeaks of alarm,” noted the editors, “we’re relieved to see one of them (with somebody else in it) go ahead and decompose.” Well, that’s not a very noble sentiment, is it? One wonders if the shop has a sign posted that says, “If You Break It, You Buy It.”

So many features argue against this 1925 cover being by Norman Rockwell—but it is. Rockwell liked faces with “character” over pretty models, but he seems to have chosen beauty in this case. The artist kept a supply of well-worn clothing and scuffed shoes for his models, but this lady is nicely attired. And Rockwell was also known to scrounge around town for the scruffiest looking mutts for a painting rather than this uncharacteristically well-cared-for cutie. So maybe it’s not a group of ragged urchins getting into mischief—at least the lovely wing chair is authentic and makes for a delightful cover!