Paul Bransom illustrated numerous animal covers for the Post. A longtime resident of New York City, Bransom spent summers at Canada Lake in the Adirondacks, where he found much of his inspiration.

Peary made numerous attempts to reach the North Pole, many with the assistance of sled dogs. Whether he actually reached the North Pole is widely debated.

During World War I, dogs were used to locate wounded soldiers on the battlefield and bring back help. Approximately 10,000 dogs were in use by the end of the war.

In the mid-1800s, the Standard Poodle became a popular circus performer because of its intelligence and stamina.

The dog has long served in the role of family guardian. Norman Rockwell had earlier portrayed dogs with “hobos” who were down on their luck, but this was the first illustration of the culprit getting a nip in the seat!

An athlete and outdoorsman, artist Joseph Francis Kernan was known as the “poor man’s Norman Rockwell.” But Kernan was a superb illustrator in his own right. His art featured, as he described it, “the human side of outdoor sports, hunting, fishing, and dogs.”

A new approach to painting developed by Jay Hambridge  – “dynamic symmetry” – was emerging, and Rockwell’s artist friends told him that he had better begin using it. This painting was his first attempt at the technique. Rockwell deemed the idea a failure, and gave the painting to a cousin who lived in Philadelphia. He vowed never to wander from the time-tested formulas that had worked so well in the past.

Maurice Bower primarily painted horses and sports scenes for the Post; this was his only cover featuring dogs.

All of Lonie Bee’s cover illustrations were about the lighter side of sports – in this illustration, the dog seems as sad as the cheerleaders!

In the 1930s, dog racing was illegal, and considered by many to be unsavory because of its affiliation with mobsters. When Bransom painted this cover in 1941, only four states had legalized greyhound racing: Florida, Oregon, Massachusetts, and Arizona.

After painting 123 covers for the Post, Stevan Dohanos became chairman of the National Stamp Advisory Committee where he oversaw the art design for over 300 stamps. His depictions include presidential portraits, NATO commemorative stamps from 1959, and the 1967 John F. Kennedy commemorative stamp.

Paul Bransom began his career as a talented wildlife artist at a very young age. He was born in Washington, D.C., in 1885 and left school at the age of 13 for an apprenticeship drawing detailed mechanical devices for patents. “Mice Hiding from Fox”
by Paul Bransom
From February 3, 1923

Wildlife artist Paul Branson not only did sixteen Saturday Evening Post covers, but thirty-five remarkable covers for The Country Gentleman—among them this February 1923 painting depicting mice hiding from a beautiful, but hungry, fox. Also from 1923, this preening rooster is irresistible. One wonders if he knows what a handsome devil he is. And one gets the feeling he does.

Bransom (1885-1979) had a propensity for drawing at a very young age. Born in Washington, D.C., he left school at 13 for an apprenticeship drawing detailed images of mechanical devices for patents. Good training, perhaps, but not as interesting as his varied creatures. “Work Horses Pulling Plow”
by Paul Bransom
From July 26, 1924
From 1924, these handsome plow horses have a high-spirited collie to distract them while they work.

The artist later traveled to New York City and took a job as a comic strip artist. Although this sounds perhaps more fun than detailed draftsman drawings, his heart was with nature, and he spent his spare time sketching animals at the Bronx Zoo. So much time, in fact, that the zookeeper allowed him to set up a studio in the area adjacent to the lions. 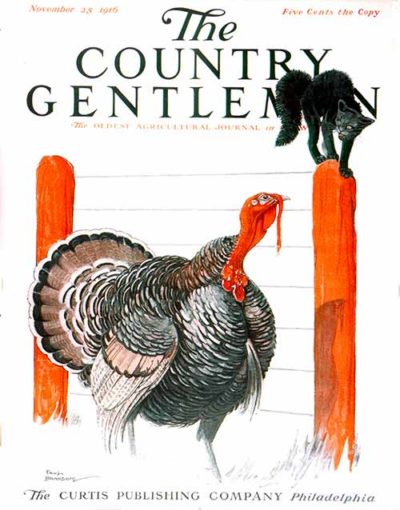 We think Mr. Tom Turkey is rather handsome, but the farm cat has no patience with his fowl play.

Bransom finally tucked a portfolio under his arm and began visiting the publishing houses. The Saturday Evening Post launched his career with the purchase of several of his illustrations in 1907. The word was out on this young depicter of wildlife. By the time of this 1916 cover, he was in high demand. “Duck Hunter and Dog”
by Paul Bransom
From October 1, 1929
Bransom and his wife had a retreat in the Adirondacks where many of the creatures he loved to draw were readily available. “Bear and Robin Welcome Spring”
by Paul Bransom
From March 14, 1925
Speaking of Call of the Wild! This bear is joining Robin Redbreast in attempting to hurry the upcoming spring season along.

Nature is nature, and many of the illustrations Bransom did were a far cry from the cute little mole in Wind in the Willows exclaiming, “oh, bother!” One Country Gentleman cover depicts a weasel with a goose he killed on a snowy bank and another an owl with a field mouse in his beak. Possibly some of these observations were made at Jackson Hole, Wyoming, where Bransom painted and taught summer classes.

Classic Covers: For the Birds

We’ve all been fascinated, even envious, of our feathered friends, and our cover artists have helped us our with our bird watching. From these beautiful nesting orioles to daunting birds of prey, Saturday Evening Post and Country Gentleman magazine covers run the gamut—and the seasons—of bird watching. Come fly with us!

I’m not familiar with artist R. Bolles, but this is the cover that got me started on this quest. I knew there must be more beautiful covers with birds, and there were many. The elderly man feeding the birds with such gentleness reminded me of a better-known cover by Norman Rockwell the same year (below).

Farmer and the Bird by Norman Rockwell

The “Farmer and the Bird” is a Rockwell favorite. There is a touching contrast between the delicate fledgling and the hard-working ruggedness of the farmer. Rockwell loved old hats and well-worn clothing and kept a supply of such items for his models. If he was going for a strong, rough look, he picked the right model and knew how to make him look even more so.

Harbinger of Spring by John Clymer

Oh, to be a bird in a beautiful John Clymer landscape! If the two little girls didn’t already know it was spring from the fact that dad’s tractor is running again in the background and from the achingly beautiful apple blossoms, Mr. Robin Redbreast is hailing the season from his perch. If you need a more detailed look, you can click on the cover.

South for the Winter by John Clymer

Artist Clymer again, because who did nature better? This time it’s mallards flying south for the winter. The vastness of the sky is beautifully executed with the pastels of dusk (or dawn). You can almost feel that new nip in the air. A family has pulled the station wagon over to observe the feathered flight and if you want a closer look, you can click on the cover. This is a migratory flyway in the lakelands of Alberta.

“Through Don Bleitz’s photographic skill let’s go calling on Mr. and Mrs. Snowy Owl in their country home near Edmonton Alberta. That’s the Mr. gazing at you from his living room, and the Mrs., smartly arrayed in her chic polka-dot ensemble, is just getting home from somewhere or other.” –Post editors, September 14, 1957. Yes, in the 1950’s, most Post covers were artist renditions rather than photographic, but happily, this photo slipped through.

Owl and Rabbit by Paul Bransom

Born in 1885, Paul Bransom was a well-known wildlife painter. His Post and Country Gentleman covers boasted everything from leopards to foxhounds. This one shows the wild side of nature with the great owl honing in on a rabbit who senses he is about to become dinner. Oh, and Bransom did great roosters – I have to share one more (below).

Country Gentleman was a sister publication to the Post, and another great spot for a wildlife illustrator to land. I couldn’t resist this preening rooster checking himself out in a mirror from 1923. Okay, okay – you’re handsome, already. Reprints of Country Gentleman covers, like those from the Post, are available at curtispublishing.com.