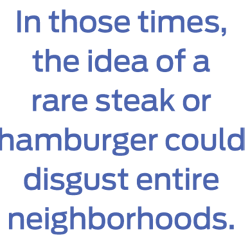 The Fourth of July is almost here, and you know what that means: Time to fire up the grill. The Post offers this classic cookout favorite, courtesy of the National Pork Board.

* Or use a reduced-fat Italian dressing

Place all ingredients in a self-sealing bag; seal bag and place in refrigerator for at least 20 minutes (or as long as overnight).

Remove chops from bag, discarding marinade, and grill over a medium-hot fire, turning once, until just done, about 8-9 minutes total cooking time, until internal temperature on a thermometer reads 145 degrees Fahrenheit, followed by a 3-minute rest time.

In hot skillet, brown chops on both sides, about 5 minutes per side. Arrange on bottom of casserole. Place onions, apple quarters, and raisins over chops. Sprinkle with brown sugar. Add broth and seasonings. Cover and bake for 1 hour and 15 minutes. Place chops on platter and add currant jelly to sauce. Pour sauce over chops and serve.