The Short Attention Span of Voters

The other day an elephant, attached to a traveling show, got away, rushed through the streets of a town, trumpeting, burst in the glass front of a saloon and penetrated to the billiard-room, scattering several hundred men in wild alarm. There its keeper caught up with it and handed it a lump of sugar. It ate the sugar, became calm at once, and returned quietly with him. How like some elections, when the people go on a rampage for freedom, get a lump of sugar from the boss, forget all about their longing to be free, and return docilely to the yoke!

Big Money and Women Voters: Who Really Chooses the President?

Remember when Washington was running out of money? Just last year, Congress was threatening to shut down the government because no one could find $1.3 Billion needed to meet the annual budget.

Well, those days are gone, we’re glad to report. A fresh breeze is blowing money into town—about $6 Billion’s worth. That’s the amount that will be spent on this year’s elections.

But what will they get for that $6 Billion, beside mountains of flyers and hours of TV ads? Will it change the outcome of a presidential election?

No one can tell for certain. But back in 1948, George Gallup was convinced presidential campaigns didn’t change voters’ choices.

In a very real sense, presidential elections are over before they begin.

They are decided to a great extent by events that have occurred in the entire period between two presidential elections, rather than by the campaign.

In politics it is always later than you think.

Gallup had polled voters before and after the presidential elections of 1940 and 1944. He found very few voters switched their choice of candidates between June and November.

Of course, it would be foolish to claim that campaigns have no effect or change no votes. But they appear to have less effect and to change fewer votes than the average party leader would like to think.

Voters listen to campaigns pretty largely to confirm what they already think.

[Yet] in presidential races today, everything is made to depend on the campaign—as if the voters lived in a mental vacuum for three and a half years, and only snapped out of it between June and November of the fourth year.

The ineffectiveness of presidential campaigns prompted Gallup to ponder— 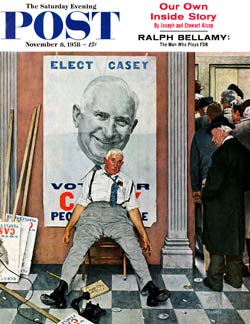 Is this wise—this pitching of all effort and money into a campaign and then coasting along for four years?

Perhaps all the hullabaloo, the verbal blasts and counterblasts, the rallies, parades, blaring of bands, kissing of babies, the feverish rushing about of stump speakers and the millions of dollars spent are not entirely necessary.

[Could] a political party give up campaigning and win? Probably not. Some kind of campaign would be needed to keep in line the voting intentions of those who do make up their minds early.

Is this still true today? Will those billions of dollars and hours of politicking ultimately change no one’s mind in the 2012 presidential election?
One recent study indicates that presidential advertisements could persuade voters, but did little to inform or motivate them to vote. Another study found that campaigns could influence voters “but the nature of this influence appears to be rather complex”—a meager return for such a high cost.

Gallup’s 1948 article— “Do Campaigns Really Change Votes?” — challenged several assumptions cherished by politicians. Party platforms, for example, were useless (“most people don’t read them”) and political speeches had almost no impact on voters (“n the course of thirteen years of polling, covering more than 190 state, local, and national elections, we have found little evidence that one speech or even a series of speeches changes many votes”).

He also made this claim:

Don’t worry too much about the women’s vote or “how to win the women over.”

The division of sentiment among women is almost identical with that among men. Rarely in recent years has it amounted to more than two percentage points. There does not appear to be any such thing as the woman’s viewpoint in politics as distinguished from the male viewpoint when it comes right down to voting on Election Day.

That may have been true in the 1940s, but the granddaughters of those women voters are showing far greater independence in their choice. The “gender gap” has become significant. In 2008, Barack Obama received 49% of his votes from men and 56% from women. Interestingly, 55% of the votes for George W. Bush came from men, 48% from women—again, a 7% difference.

When the gender gap was just 2%, Gallup made several conclusions that—we hasten to add—might have been valid for their time.

The reason seems to be that, on political matters, women generally accept the judgment of their men-folk. They take their cue from the opinions or prejudices of a husband, a father, a son or other male member of the family. Of course, this is not true of all women. But in the average household the woman goes on the theory that her man knows more about those things than she does.

Polls have found that when a change of political sentiment takes place, it almost always starts with the men, not the women. The women catch up with the trend later—after they’ve talked to the boss.

In all fairness, it should be said that there is no real reason why women should vote differently from men, even if they paid no attention to the ideas of the allegedly dominant male. No one would argue that women ought to vote differently just for the sake of being different. The only point here is that one must be cautious in talking about the woman’s viewpoint in politics. Although the average male candidate running for office usually makes quite an effort to win the feminine vote, it may be questioned whether such pains are necessary. If the male voters can be won over, the women will generally come along too.

Presumably, some of those billions of dollars are being spent right now to understand just why women don’t vote the same as men.