We know how it is: If you hear “I approve this message” one more time, you’ll throw your shoe at the TV. Maybe both shoes. Well, we have a fresh look at some vintage election art from The Saturday Evening Post archives, and we think you’ll approve.

Norman Rockwell at the Voting Booth “Here I am on November 8. As you can see, it’s not easy for me to make up my mind…” Norman Rockwell says in the caption of this 1960 Massachusetts Mutual Life Insurance Company advertisement (left).

The ad was one in a series of 81 pencil drawings Norman Rockwell sketched in the ’50s and ’60s for the insurance company. The advertisements depicted family life and ran in magazines such as Newsweek, Time, and The Saturday Evening Post. His artwork graced many ads, if not from A to Z, then at least from Acme Market to Western Union. The insurance series was Rockwell’s largest body of ad work.

Though we don’t know if he cast his vote for Richard Nixon or John F. Kennedy, we do know that he enjoyed working with both men in 1960, painting each of their portraits for The Saturday Evening Post covers. He found Nixon “as warm and friendly as the father of two pretty daughters could be.” And when he arrived to paint young Senator Kennedy, he found JFK still in his PJs. “The pajamas were rumpled, but he was wonderful,” Rockwell said. See “Post Presidential Covers” for both portraits.


Boy With Portraits of Taft and Bryan 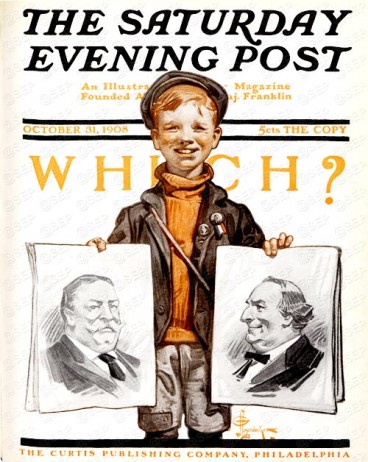 Boy with Portraits of Taft and Bryan
J.C. Leyendecker
October 31, 1908

The third time was not the charm for William Jennings Bryan (portrait right). He lost the 1896 and 1900 presidential elections to William McKinley. And with the backing of popular incumbent Theodore Roosevelt behind William Howard Taft (portrait left) in 1908, Bryan lost again. J.C. Leyendecker, the Post‘s most prolific cover artist illustrated more than 320 Saturday Evening Post covers, from 1899 to 1943.

Leyendecker’s art ran the gamut, from lavish and elegant to humorous. Few covers were of a political nature, as Post editors preferred eye-catching portrayals of pretty girls or amusing scenes with children. However, Leyendecker depicted George Washington on five Post covers and did a memorable sketch of the corpulent William Howard Taft on the occasion of his 1909 inauguration (see “Post Presidential Covers”). For 37 consecutive years, J.C. Leyendecker welcomed the dawn of a brand new year with that famous New Year’s baby. Often, the cover was a reflection of the times: The 1910 New Year’s baby was flying a new-fangled biplane; the 1914 tot was riding a ship across the Panama canal. The precocious infants were aware of Prohibition and worried about the first global war and the Great Depression. The last New Year’s baby in 1943 wore a helmet and stabbed a swastika with a bayonet.

Our young lady (left) welcoming 1912 is ahead of her time; women didn’t get the vote until 1920. We’re reminded of Hillary Clinton’s quote from the 2008 primaries: “My mother was born before women could vote. But in this election my daughter got to vote for her mother for president.” J.F. Kernan illustrated nearly 30 covers for the Post and 28 for its sister publication, Country Gentleman, left. With arresting use of color, he depicted old sailors and frequently painted outdoor hunting and fishing scenes. It is indicative of his skill as an illustrator that he could move from a blue seascape or woodsy scene to a droll interior.

Four years before this issue of Country Gentleman hit newsstands, the 19th Amendment was passed, granting American women the right to vote. Women were still striving for political equality. In this cover, hubby is more than a bit skeptical of his wife’s choice. Clearly the artist was on her side: See Her Man Won! (below) which appeared on the very next cover (November 1, 1924). The Post’s sister publication, Country Gentleman occasionally ran two-part covers in the late 1910s and early ’20s. Part one of this scene appeared on the October 25, 1924, cover (see above). Left, the artist J.F. Kernan illustrated hubby having to eat crow after deriding his wife’s choice.

Another artist who had fun with the “wait until next week” concept was Norman Rockwell. Normally associated with The Saturday Evening Post, Norman Rockwell did 35 covers for Country Gentleman. The model for this cover (left) was indeed politician Bernard T. Casey of Boston. For some years prior to this cover’s appearance, Casey, a telephone company executive, had served eight terms in the state legislature. He then quit running, but this natural-born leader with the winning smile never did quit helping other people campaign and win.

The cigar-chomping man to the right was Tom Carey, a fixture in Stockbridge, Massachusetts, where Illustrator Norman Rockwell lived. Carey delivered the mail from the railroad station to the post office via horse and buggy for more than 50 years. During the summer, he also drove tourists around the countryside in his surrey, pointing out places of interest such as the Old Corner House, which served as the Norman Rockwell Museum for 24 years.


First Vote in the New States “This week, for the first time in history,” wrote Post editors in 1960, “the citizens of the Sandwich Islands and of ‘Seward’s Folly’ go to the polls to help elect a President of the United States.” It was a record-breaking ballot year, and Russian-born artist Constantin Alajálov couldn’t resist illustrating the contrast between the voters of the two recent additions to the United States, Hawaii and Alaska.

Concerning Alajálov’s subject, editors wrote, “And who knows, perhaps one of them, an orchid-picker or a seal skinner, is casting the vote that carries the state that swings the election. … This amalgam of people living together in harmony is bright evidence of the democratic way of life they’re voting to preserve.”