My Three Sons is not only the title of a 1960s sitcom starring pipe-toting Fred MacMurray; it’s also a fitting title for the story of one pipe-toting artist, Norman Rockwell. His three boys—Jerry, Tom, and Peter—showed up on the cover of The Saturday Evening Post more than half a dozen times. Half of the 52 Post covers in 1942 were war-related: soldiers in action, girlfriends waiting at home, and so on. So this cover (left) was a special treat for two reasons. First, it was humorous and fun, and second, it was by America’s favorite artist. When Rockwell did a cover, thousands of additional issues were printed to meet the demand.

Rockwell sometimes used neighbors’ homes for the settings of his paintings. In a 1976 Post article, former Rockwell model Ann Morgan Baker (see The Missing Tooth in “Rockwell in the 1950s—Part I”) recalled that the artist “used to call my mother at 7 a.m. and say, ‘Don’t make the beds. I want to come and look at some messy rooms.’ Then he would come and wander through our morning rubble.”

Because Rockwell did not have a daughter, he probably used such a neighbor’s home to find this vanity with all the frills. Reportedly, middle son Tommy had to be bribed to pose for this 1942 cover, although it was noted that the mischief-maker was just the kind who would have read his sister’s diary—if he had a sister, that is. Norman Rockwell’s World War II covers were usually light and humorous, like the ones in his Willie Gillis series. A very fine exception to this was the serious depiction of a returning marine sharing his experiences at left. There is no bravado; no showing off. The grim reality of war permeates the gathering at the local garage.

As Rockwell’s life is well documented, we know most of the models in the garage are the artist’s Arlington, Vermont, neighbors and friends, including the actual shop owner, Bob Benedict (standing behind the marine). Sitting beside the marine is Rockwell’s youngest son, Peter. The blond boy standing up is Jerry, his oldest. The decorated soldier was real-life marine Duane Parks, whom Rockwell met in a nearby town. At times, uniform medals and ribbons were borrowed to dress up a scene, but the military decorations shown here belonged to Parks.

Rockwell enthusiasts will appreciate the artist’s attention to detail in this 1945 cover. In addition to the usual machine-shop equipment: gaskets, the large hook, etc., he included the Japanese flag; the newspaper clipping on the shop wall, which declares the marine a war hero; and the small flag with the blue star representing a family member serving in the armed forces. We see these starred flags not only in Post covers of the period, but also, for example, in movies. In Saving Private Ryan, Ryan’s mother has such a flag. A star was added for each family member in service; the blue signaled hope, and a gold star meant a loved one had died in service. The young man at left getting ready for his big date is Tommy Rockwell, who is looking quite grown up compared to the little sneak he portrayed for a cover six years earlier (see Devil May Care, above). Tommy’s actual room in Arlington, Vermont, is the setting, and the woman giving him a hand is his real-life mother (Rockwell’s wife Mary). However, the artist of this domestic scene is not whom you’d expect. It’s Rockwell’s good friend George Hughes, who had moved to Arlington to join the small community of Post artists there. The artists often used the same neighbors, their families, and each other as models.

Hughes, though less well known than Rockwell, was the most prolific Post cover artist of this era—he produced 80 covers in the 1950s to Rockwell’s 45—and he had an unintended influence on one of Rockwell’s classic covers, Saying Grace (below). Intrigued by a fan’s description of an Amish woman and her grandson praying together in a cafeteria, Rockwell painted what is now one of his best-known works, Saying Grace (left). But this painting came very close to being abandoned before it was completed.

Rockwell told fellow Post artist George Hughes that he got so frustrated with the painting he threw it out his studio window, according to a 1992 article in the Post. When Hughes asked the theme, Rockwell described it as centering on several rough-looking fellows watching a woman saying grace in a diner. Hughes agreed it would never work. That comment was all it took to get Rockwell started again. He retrieved the painting from the snow and completed it. This became a long-running joke between the two artists: Rockwell would solicit Hughes’ opinion and then do the opposite.

The blond diner with his back against the window is Rockwell’s son, Jerry, looking much older than he did on the 1945 cover War Stories (above). On a sad note, the woman bowing her head, May Walker, did not live to see the cover; she passed away five days before it was published. Although she didn’t have the pleasure of enjoying the stir among her Arlington, Vermont, neighbors over her newfound fame, Rockwell assured Post editors that she derived a great deal of pleasure from the experience. When the painting was done, Walker was brought to Rockwell’s studio to view it. People who knew her well told the Post “her enjoyment of that day was one of the high moments of her life.” In his first attempt at this 1953 cover (left), the artist had painted a man in the immediate foreground and a woman with her son at the other end of the counter. He decided these people cluttered and confused the scene. Painting it again, Rockwell focused the attention on a teenaged soda jerk and his female admirers.

The idea came after Rockwell listened to his youngest son Peter’s tales of his summer soda-fountain job. Peter posed as the soda jerk, but he didn’t care for the finished painting. “I’m not that goofy-looking,” he said. Peter Rockwell appeared on the War Stories cover (above) and in Second Thoughts.

Today Peter Rockwell is a sculptor living in Italy and discusses his art in this video, courtesy of the Norman Rockwell Museum. 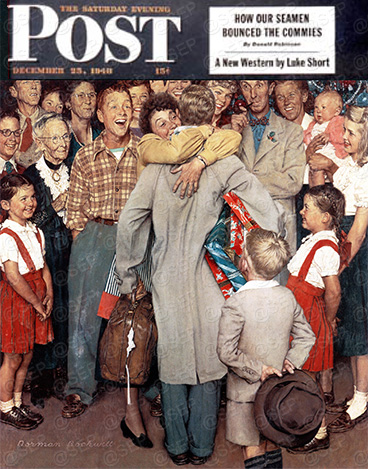 The Homecoming at left is one of the great Rockwell covers featured in our special holiday issue, Norman Rockwell A Very Magical Christmas!. And it is magical indeed when an absent family member comes home for the holidays. All three of Rockwell’s sons are there—although we only see the back of his oldest son, Jerry, who is receiving a joyful hug from his mother Mary. To the left of Mary is son Tommy in the plaid shirt and to the far left is youngest son Peter wearing glasses. To Mary’s right, with that ubiquitous pipe, is America’s favorite artist, who enjoyed the occasional cameo in is own paintings (See “Rockwell Paints Rockwell”).

A family gathering needs a grandmother, and happy to pose for the role was none other than Grandma Moses. Rockwell wrote of Moses in his 1979 book, My Life as an Illustrator:

“After the war I became acquainted with Grandma Moses, the famous painter of American primitives. She had started painting seriously at the age of 67 after the death of her husband. Using dime-store brushes and house paint, she did scenes of country life which she remembered from her childhood.” Noting that she would do paintings of someone’s house for $10 or $15, Rockwell continued, “When I knew her, she was over 85 years old, a spry, white-haired little woman. Like a lively sparrow. She still painted in her bedroom on the third story of her farmhouse, using the same cheap brushes and house paint, though the paintings were selling rapidly for very good prices.”

The rest of the homecoming crowd consisted of Rockwell friends and neighbors, including the “twins” in the red jumpers—both were actually one little girl named Sharon O’Neill, whom Rockwell painted twice.