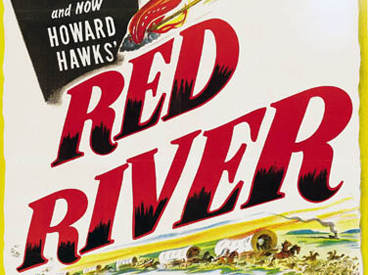 Bordon Chase’s “The Chislom Trail” was a six part series that first ran in the Post in December 1946. Brought to the silver screen in 1948 under the name Red River, the movie starred John Wayne, Montgomery Clift, Joanne Dru, and Harry Carey. Director Howard Hawks had initially offered the role of Thomas Dunson to Gary Cooper, who turned it down for fear that the character’s ruthless nature would damage his screen image.

The film was nominated for Academy Awards for Best Film Editing and Best Writing, and was officially preserved by the National Film Registry and the Library of Congress in 1990 for its cultural, historical, and aesthetical significance. In 2008, it ranked fifth on the American Film Institute’s list of the 10 greatest films in the “Western” genre.

Despite its moderate success, fans might never guess at the behind-the-scenes tension between Wayne and Clift that almost prevented the actors from being cast together. The two were polar opposites politically, and despite a rumored pact to avoid all discussion of politics on set, the actors eventually disliked each other so much that they avoided one another when not filming. Co-star Walter Brennan didn’t mesh well with Clift either—so much so that Clift later turned down the role of “Dude” in Rio Bravo to avoid the two actors. The role eventually went to Dean Martin.