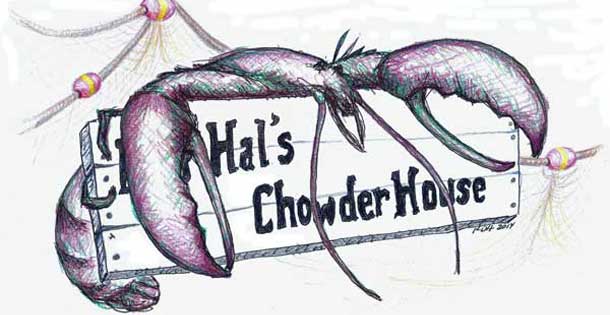 The last time the police called Big Hal in the middle of the night was when Todd Emory had sucked a bottle of tequila down to the worm and passed out, leaving Shotput, his schnauzer, at the helm of his trawler. Shotput, a diligent dog but with undeveloped piloting skills, navigated the vessel full-steam into port, through the docks, over a boathouse, and across the street, where shortly after midnight it dropped anchor just to starboard of the deep sink in what was left of the Chowder House’s kitchen.

The nautical incursion nearly decimated the restaurant, but Todd (when he woke up) was appropriately contrite and remorseful, no one was injured, and these sorts of things happen from time to time anyway. It had actually turned out to be a positive event for the community when all was said and done. Todd had paid for the repairs–incorporating unsolicited but pleasing improvements to the restaurant and docks in the process–had renamed his trawler the “Big Hal,” swore off the bottle, was elected to village council, and eventually earned the role of chief of police. Already a regular customer before his trawler nearly demolished the restaurant, Todd became one of the refurbished Chowder House’s most dedicated patrons and one of Steve’s greatest admirers.

This time when the police woke Big Hal after hours, it was Todd Emory himself who placed the nocturnal call reporting that the Chowder House once again lay in shambles. The demolished storefront glowed under the blue and white flashing police lights when Hal stumped up out of the night fog to stand next to Chief Todd; he frowned at the scene of destruction, a sight gruesome enough to turn a yellow rain slicker stone gray. The door yawed on its hinges, smashed table flotsam littered a sea of broken glass, and at the back of the room, glinting under cruiser strobes and police Maglites, the shattered lobster tank hunkered in chunks on the floor. A half dozen lobster corpses, legs curled like dead spiders, peppered the sodden ruins.

Near the door, an officer stooped over a heap of rubble, probing the wreckage with a pen, taking pictures, scribbling notes.
Big Hal stepped forward, but the chief gripped his arm.

“Crime scene, Hal. Sorry.” Todd Emory tilted his head toward the door, and Hal realized the officer wasn’t squatting by a rubble pile.

It was Steve. The lobster’s massive form sprawled halfway through the doorway, and Big Hal could see, even from where he stood, Steve still clasped something in one massive claw. The officer, using his kerchief and a Swiss army knife, pried the evidence from Steve’s pincers and dropped it into an evidence bag. Then he stood, turned from the carnage, and picked his way through the debris toward the chief and Big Hal. He gave a half nod to Hal, and a report to the chief.

“Looks like a thumb. And a ring finger. And an index finger,” he said, holding up the bag, turning it to scrutinize its contents, before handing it to Todd Emory.

The chief turned the bag over in his hands; the muscles in his jaws clenched and unclenched and the creases in his face deepened.

“Should be able to pull some prints off these,” he said. He sniffed and handed the bag back to his officer. “And let’s make some calls to area ERs. Find out who’s maybe showed up without their fingers.”

He turned to Hal, his voice thick. “We’ll find out who did this, Hal.”

Hal nodded, silent. For a long time he stood there, his gaze fixed on Steve’s body, staring at it, sprawled across the restaurant’s threshold like a sentinel or some sea-born sphinx.

Without much difficulty, Todd Emory’s constabulary had located, arrested, and interrogated the de-fingered perpetrator before daybreak. Though duly Mirandized, Fewer-Fingers did not exercise his right to remain silent, electing just the opposite and launching into a copious and graphic narration of all the night’s events. He was one of the many usually unmemorable tourists whose offer to buy the Bionic Lobster had been more insistent than some and who had been more offended than most by Hal’s rejection. Sometime after leaving the Chowder House, the man had stopped at a nearby tavern, where he had taken and met that establishment’s “Maine Line Challenge” (involving a keg, shot glasses, and indeterminate quantities of beer).

Subsequently, he had revisited the inequity of his rebuffed offer. Reasoning that one good challenge leads to another, the tourist backtracked to Big Hal’s in the wee hours, intent on making entry to the restaurant, untidily rearranging its contents, and leaving the locale with the Bionic Lobster. Armed with a shotgun and a 4-iron, he kicked in the restaurant’s door and blasted the lobster tank with the shotgun, sending a cascade of lobsters and broken glass shooting the rapids onto the floor. The tourist reached to nab his prize. Steve, disinclined to cooperate under the best of circumstances and likely peeved by this midnight intrusion, deftly snared the intoxicated tourist’s hand, shotgun and all, with his gigantic claw.

The tourist made sincere and energetic attempts to disengage Steve. The pair crashed through the restaurant, the 40-pound lobster swinging from the end of the man’s arm like a prehistoric pit-bull/wrecking ball, his free claw snapping through the air. The now frantic tourist wind-milled his 4-iron, connected with everything except the crustacean, and it wasn’t until the shotgun worked loose from the lobster’s claw and hit the floor, discharging its casing of pellets through Steve, that man and lobster finally parted company.

Fewer-Fingers immediately fled the scene–without the Bionic Lobster and without several of the fingers with which he’d arrived. Steve kept hold on those fingers, even after their hand was long gone. But it was the last thing he did.

At dawn two days later, a flotilla headed out of the harbor for Steve’s burial-at-sea. On-shore, a new plate glass window shined in the morning, new tables replaced the scrapped, broken ones, and the door hung square in a sturdy custom frame. A new lobster tank stood dry and empty. Out on the boardwalk, crews used a pulley to rehang the appended storefront sign, the paint not quite dry yet: “Big Hal’s Chowder House. Home of the (late) Bionic Lobster.”

Every fishing boat, trawler, and lobster potter in the community sailed in the wake of the “Big Hal”; on board, Todd Emory and Shotput stood at attention near Hal’s assembled family; a dozen or more boats floated all around them on the quiet sea, all gathered in silent tribute. When they had assembled, and all was quiet, Hal swallowed at the lump in his throat and nodded. Grim and resolute, the twins lifted the heavy cardboard produce packing box over the boat’s side. Slowly, leaning over the railing, they eased the box into the water. It slipped below the surface, streams of bubbles following its descent as it faded from view, until even the orange buoy-painted “R.I.P.” on top of the box disappeared into the depths.

Standing on the boat deck next to Todd Emory, Shotput tilted his head as the cardboard coffin gurgled down; he watched the last of the bubbles wobbling to the surface, and cocked his ears at their blips and pops. Then a whine started deep in his chest, and it grew into one low, long howl. It poured from him, and after that single, mournful wail had rolled away across the water, the boats in the flotilla turned one by one and headed back toward port.