Dad hopes to inspire his son to view his lowly new job as a life lesson in human nature that will teach him the most effective ways to undermine his superiors.

Dear Son: So you were afraid that I would be mortified because you had to take such a lowly job. On the contrary, let me be the first to congratulate you. There are no lowly jobs. There are only lowly jobholders. The lower down you start the better chance you have to undermine the job above. You are a filling-station attendant. That means you are practically a termite in the great oil industry. You are invisible, and, if you are smart, you can work silently and bore your way right to the top.

There is no better place than a filling station to learn about oil. Or human nature. And though your next job may have nothing to do with oil you are going to be dealing with human nature all your life. You might just as well start now taking it seriously. You can’t laugh it off. You can’t growl it away. All your life you are going to have to live with people, work with them, sell them your ideas, convince them if possible, relax pleasantly if you can’t, plan what to do about them, persist with your own plan, and finally — the neatest trick of all — don’t push.

People don’t like to be pushed. You can always start a fight with a perfect stranger who has nothing against you just by walking up and pushing him. He’ll push you right back. You can always get the same place either by walking around him or waiting until he moves away. If he doesn’t move fast enough, lure him, coax him, convince him he’d be better off somewhere else — anything but shove him.

Don’t push into the job above you. Study it. Learn all about it. Plan how you would do it better and, incidentally, the job above that one too. Don’t just wish for it — want it. Persist in wanting it. Want it more than going to the movies, more than sleeping late, more than taking your girl out dancing. If she’s the right kind she’ll encourage you to spend more time on your future and less on her. Any job you want as bad as that you’ll get — there’ll be nobody in your way, at least until you get away up there in the peaks where the eagles nest. Then you’ll need a different technique. Let me illustrate:

“It’s very simple,” replied the young man. “I run as fast as I can for two hundred yards, and then I sprint.”

Learn to plan. You have just spent four years in college where everything was planned for you. When you got up, when you ate, when you studied, what you studied. Then you graduated and hollered: “Yippee, I’m free.” Well, you’re free all right, and you have the very best kind of freedom. The freedom to do your own planning. If you wanted to build a house you would first draw a plan. If you wanted to drive from New York to Los Angeles, you would get a map. If you started for China, you would expect the captain to have a chart and know how to follow it. It happens now that you’re paddling your own canoe, and you are your own captain and your own crew, and, if you want to get some place, you must first decide where you want to go, second, that you really want to get there, third, that you’re going to lay out a course, fourth, that you’re going to follow it and fifth, that you’re going to determine your position every once in a while and find out whether you’re on the course or headed somewhere else. Every day at noon a captain takes his position, or tries to. He may have been blown off his course, he may have been lost in a fog, but he doesn’t sit down and weep into his whiskers about his bad luck. He gets busy about getting back on the course. Nobody is going to hold him responsible for being blown out of his way by a typhoon or being held up by a fog, but everybody would be pretty sore if they bought a ticket to Shanghai and wound up in Alaska, and the only satisfaction they could get out of him was that the breaks were against him.

You’ll hear a lot about getting the breaks, and the element that luck plays in success or failure. You have seen football games won by what was called a lucky break. A long pass down the field intercepted by the other fullback, caught and returned for a touchdown.

Well, maybe it was luck that the fullback was on the right spot to intercept the pass, but it wasn’t luck that he caught it. He had practiced a lot of hours catching forward passes. And it wasn’t luck that he ran it back successfully. He had spent many more hours learning how to run with a ball without getting thrown on his face. You will live a long time, God willing, and a lot of passes meant for the other fellow will come your way. If you’ve learned how to catch them and hold on to them you’re bound to make a touchdown. The law of averages will take care of that.

Does planning your whole life frighten you? Then plan a year. If you can’t plan a year, plan a month, or a week, or a day. Plan one day and carry it through. Take the next one and do the same. “A journey of a thousand miles begins with one step.”

“All very noble,” says you, “but what has that got to do with me? Here I am a college graduate, filling gas tanks and cleaning windshields for sixteen dollars a week.”

Not a bad salary, my son, for learning how to clean windshields and how to please customers. Not a bad salary for the opportunity to learn about oil and gasoline and motors and maps and roads. And even from a dollars-and-cents point of view I am not complaining. Although I never kept books on it, I surmise your education cost me around two thousand a year for the four years you were in college, and maybe as much more before that. Call it sixteen thousand dollars. Well, sixteen dollars a week is 5 percent return on sixteen thousand dollars. Anything more you get will be that much velvet.

Glancing over this letter, I find too much emphasis perhaps on getting along. Perhaps I am over-anxious. Perhaps I underestimate your latent ability. Oldsters are always saying: “ Don’t do as I do. Do as I tell you.” It is only because I am fond of you that I pester you. Youth is forever blowing bubbles. Also nursing bruises. I’d like to save you from a few wounds, or perhaps show you how to turn them into honorable scars. I want you to remember to plan, to persist, and not to push. It may sound like heresy, but I don’t want you to be a go-getter. Everything comes to him who waits — watchfully. Maybe some day I’ll write you a whole letter on this subject. It may surprise you. Meanwhile, I would like to leave a little thought with you. Paste it in your hat. It was written by Epictetus nearly two thousand years ago, but don’t let that bore you. All the good things aren’t new.

Remember that you must behave as at a banquet. Is anything brought round to you, put out your hand, and take a moderate share. Does it pass by you, do not stop it. Is it not yet come, do not yearn in desire towards it, but wait till it reaches you. So with regard to children, wife, office, riches; and you will some time or other be worthy to feast with the gods.

Next: A Disappointing Job, Part Two 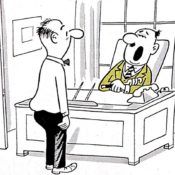