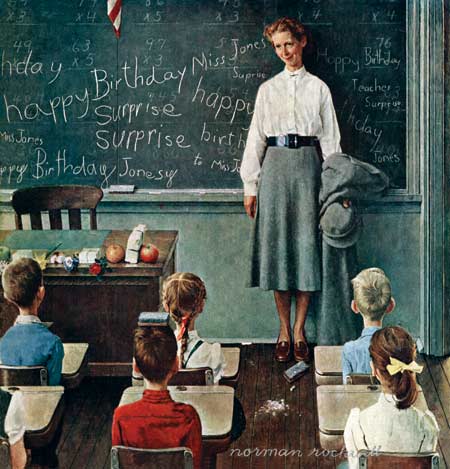 In the aught years of the previous century, a certain teacher (named Smith, not Jones) had a certain young pupil by the name of Norman Rockwell in her classroom. Rockwell was not a strong student, but Smith recognized his artistic flair. Happy Birthday, Miss Jones is his tribute to the woman who encouraged him to draw.

Film directors Steven Spielberg and George Lucas have described Rockwell’s work as cinematic, and this one is a prime example. Though it consists of a single “frame,” one can imagine an entire scene prior to the teacher’s arrival: children neatly placing gifts on her table, scrawling greetings on the blackboard, the sudden rush back to their desks as they hear Miss Jones approaching (suggested by the chalk and eraser on the floor). Then there’s the class clown, playing for laughs by placing an eraser on his head.

This cover inspired numerous letters to the editors, including one from Laura R. Jones, of Atlanta, who wrote that she had known a moment just like this. She had walked into her classroom to find a cake decorated with the words We love Miss Jones. Whenever she faced a dark day of exhaustion and discouragement, she wrote, the memory of those bright, eager faces kept her going and in love with her work.