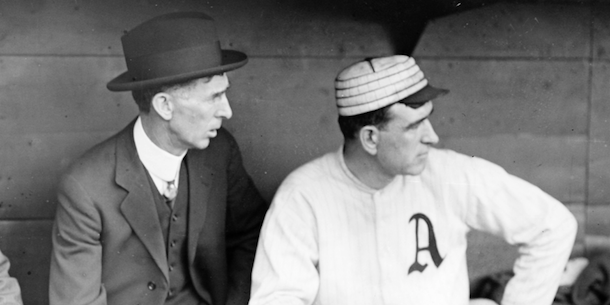 Cornelius McGillicuddy, aka Connie Mack, is best known for his long association with the Philadelphia Athletics. Mack managed the team for the baseball club’s first 50 seasons of play, starting in 1901. He finally retired in 1950 at age 87. He was also a player for 11 seasons, beginning in 1886, primarily in the role of catcher. In the following piece, he recalls the very different game he played in those days.

We made two rings 30 feet apart, with a batter in each ring. The pitcher stood outside of the ring and lobbed the ball weakly in to the batter. He wasn’t trying to make the batter miss it. That would spoil the fun. After hitting it, the batter would spring madly for the opposite ring. He was out if he was tagged with the ball between the circles. He could be put out by being hit with a thrown ball, and if the ball was caught on the fly, he was out. We used a flat bat and a soft, covered ball. Later on, when I grew a little older and taller, we began to play a game much nearer the present game of baseball and less like cricket. We had a home plate and three bases and a big bat and a leather-covered ball.

When I was 16 I went to work in the Green & Twichell shoe factory. I remember in that summer we chipped in and bought a glove for $2. It was made of buckskin and had no fingers. It was used in turn by one player after another, since it was common property. Up to that time we had played with our “meat” hands, and the catcher caught the pitcher’s offerings on the first bounce.

My father, who had worked in the shoe factory, had died when I was in my teens, leaving the business of feeding a sizable and hollow-legged Irish family squarely on my hat rack shoulder blades. Naturally, there was a pretty serious family conference in our little East Brookfield home when I told my mother I was thinking about signing with the Meriden club, of the Connecticut State League, in 1884. She gave her consent at last, reluctantly and with secret misgivings. But she made me promise I wouldn’t drink. She felt better after that.

Meriden was a big jump up from the little horse-and-buggy league called the Central Massachusetts League in which I had been playing, and which supported itself by passing the hat at the games and by the take from social functions, such as clambakes. With the Meriden club, I received my first professional baseball salary, the noble sum of $90 a month. And I was afraid to let the other boys on the club know.

In 1886 I broke into the major league as a member of the Washington club, then in the National League. When I started as catcher, we still took the ball on the bounce. The pitcher was 45 feet from the batter. He would turn his back and take a hop, step, and a jump, swinging his arm in a wide circle and letting the ball go with his hand below his hip, in a sort of underhand delivery. But from 45 feet away that ball came mighty fast, especially with all of the momentum worked up by the hop, step, and jump behind it. The fielders were still catching them meat-handed.

In the 1880s the rule for major-league batters was seven balls and three strikes, except for one year, 1887, when it was four strikes. The rules were in a constant state of flux. Up to 1880, a foul ball caught on the first bounce was an out.

When I first began to play for the Washington club, a batter was allowed to tell the pitcher what kind of ball he wanted pitched to him. Under those conditions, the pitcher was just a man who tossed them up the alley for the batter to hit. He was the hitter’s stooge. I liked high-ball pitching, and I got along pretty well lashing away at a steady stream of balls that floated up to me waist high or just under my chin. I would walk up there calm and confident, knowing that I could call for the kind of ball I wanted, and when at last it came along, I would take a cut at it and give it a ride.

But this pleasant state of affairs didn’t last long. During the winter of ’86 and ’87 the present rule was adopted which allows the pitcher to pitch to a point anywhere between the batter’s shoulder and knee. Under the new rule, I couldn’t hit for sour apples, and I wasn’t the only one. A flock of big-league batting heroes found the going too rough for them. Of course, some of them — the “naturals” — couldn’t be bothered. A natural hitter didn’t care one way or the other. It was all one to them. If the pitcher had been allowed to fling bird shot at them, they would have stepped up there and taken a cut at it, supremely confident that they could whale it up against the center field fence.

In those days a player bought his own glove, shoes, and bats. The club supplied the uniform. Those were the tools of your trade, and you were supposed to report for work with them just as a plumber or carpenter must show up with his own monkey wrench and saw and hammer. If you were unlucky enough to run into a pair of flying spikes, you brought out your own iodine and arnica and fixed up your own wounds. And you kept on playing, injury or no injury. There were no extra players lying around to take your place. You played if you could stand up. That was the custom, and we accepted it as a matter of course.

There was only one umpire, and he had to be tough. He stood behind the plate. Then, when a batter got on the bases, the umpire walked out into the middle of the diamond and stood behind the pitcher. Before 1882 an umpire was allowed to take testimony from a player or bystander to help him decide a disputed play.

If a ball was lost, strayed, or stolen, prior to 1886, the umpire called a recess of five minutes while all engaged in a hunt for the missing projectile. After five minutes had gone by with no success he was allowed to put a new ball into play.

It wasn’t until after the catcher moved up close to the plate that the big catcher’s mitt came into general use. The small finger glove worn by the catcher wasn’t enough protection when a catcher was taking them steaming hot instead of on the bounce. The first catchers to use the big mitt were held up to scorn as being softies by the old-timers, but when I think back and conjure up a mental picture of the average old-time catcher’s hands, the only wonder is that we didn’t start to use the big mitt sooner. Some of them kept on catching fireballs with their meat hands to the bitter end, although their fingers were gradually pounded into gnarled and twisted claws that looked like nothing human and had to be strapped together before a game. My own hands would not exactly qualify for a beauty show, as a matter of fact, and my fingers seemed to go off in odd directions from one another on private errands of their own, and then curl back unexpectedly toward one another at the tips.