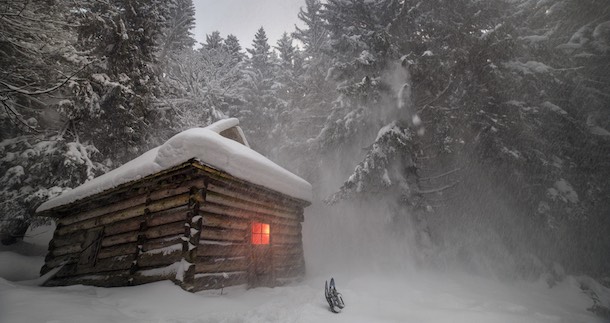 It was snowing again, and the snow was less falling than being driven sideways. The wind had picked up and gusts rocked the lift wildly, tore at the cable. And then, they were at the top.

A freaking blizzard, Trinity thought. Our first trip together. A ski trip to Canada. To make him happy. And we get a blizzard.

Snow whipped in their faces, and a ski patrol shouted at each of them in turn, “Shelter in the warming cabin. Over there. Wait till it slacks off.”

Ten people struggled blindly toward the cabin, broke in through the door and dragged it shut. Stepped into another world. Cozy, warm.

Trinity stacked her skis and poles in the wall rack, collapsed onto a bench. A fire was burning in the woodstove; a kettle softly hissing on top. A cupboard revealed coffee and cocoa packets, stacks of paper cups, a couple of big cans of Habitant Pea Soup, a can opener. Okay. She smiled: An adventure: Trapped in a Warming Cabin in the Wilds of Canada.

James grumbled. Like it was her fault, the blizzard. “I wanted this trip to be perfect. For you. For us,” he said.

“It’s okay,” she said. “It’s an adventure.” She smiled to make him smile, but he passed.

The cabin was overly warm and crowded. With mittens and jackets piled on picnic tables, it was wet and messy, too.

“Yeah, so let’s go.” A boy announced, one of a group of high schoolers, from his accent, up from New England. He was lean with curly hair and a cute smile. “It’s just snow,” he said to the others cheerfully. “We know snow. We can go down the back.”

A boy with a visored watch cap agreed. “Let’s do it. This place sucks.”

Still in their outer clothes, the kids picked up their skis and poles and left.

Trinity opened the two cans of Habitant Pea Soup and emptied them into the saucepan on the woodstove.

“Don’t add water,” a woman said at her elbow.

Trinity settled across from James, lifted her cup of cocoa to him.

She smiled back and took a sip of cocoa, but looked briefly away at a man across the cabin, a Scots Canadian judging by his blue eyes and soft, fair cheeks pinked by the cold.

Alone on a bench by the window, he was staring out at — the snow? No. He was too intense for that. He was trying to see through the snow, leaning a little this way, then that, his mouth pouted. Suddenly, he rose to his feet, startling her.

“Those kids,” he said, frowning.

They all looked up from their steaming cups.

“They were outside a moment ago,” he said. “They didn’t leave. They disappeared.”

“’Said they were going down the back,” James said indifferently.

“No. They were arguing. A couple wanted to use the trail, but you can’t ski in this, and the leeward side is off trail. Then they disappeared. Like they dropped off the earth.”

A gust of wind whacked the cabin so hard it shook. Louisa looked anxiously at her companion, who gave her a squeeze and a reassuring smile. Trinity turned back to James.

The man frowned again. “No. Not like you said. Either they went over the cliff or they went off trail. Either way, they could be in trouble. You know Mainers. They think they know everything about snow. They get in more damn —” He slipped into his jacket, zipped it, pulled a cap down over his ears and picked up his gloves. “I’ll go check. If I’m not back —” He paused. “I’ll be back.”

Louisa’s man stopped him. “Don’t go out there alone, man. There’s no visibility. Wind could suck you off the side of the mountain. They wouldn’t find you ’til spring.”

The man looked around. “Someone care to join me?”

James looked away. The wind thumped the north wall. “Be a complete idiot to go out in this,” he muttered.

“I’ll go.” Trinity stood but was yanked down by James’ firm hand.

Trinity looked at him in disbelief: “But I’m a first responder. If there’s a problem — if one of them’s —”

“You’ll stay right here,” he said. Cold as an iceberg.

Louisa’s man suited up and the two men unlatched the door, which flew open, hitting the wall outside with a bang.

Trinity stood to help Louisa with the door, but James pulled her back.

“Guy wants to risk his life for a coupla kids, that’s his problem. Not mine. Not yours,” he whispered angrily. He gave her arm a shake. “Never talk back to me in public.”

He dropped her arm and turned away.

The door burst open, and she started up, thinking it had blown open. Instead, all five kids and the two men poured back into the cabin.

“They fell down a tree hole,” the man she thought Scots-Canadian announced.

The curly-haired boy shrugged, smiling broadly. “We were standing on the snow talking, and Anna disappeared. Poof. Then Tyler. Then we all fell in.”

A girl explained. “The snow covered the trees up against the cliff. We were standing over the cliff on the tops of spruce trees. Like Wile E. Coyote.” She giggled. “And then the snow gave way, and we fell down the cliff through the trees. Nobody’s hurt,” she said. “It was really funny. We were all laughing.”

“How’d you get out?” Trinity asked.

The other girl shook snow off her jacket and gave a little snort of laughter. “We climbed the trees.”

Soon the wind lightened and the snow stopped. Separately and together, they skied down the mountain.

But Trinity carried the tree hole in her heart, guarded it tenderly against her chest.

She too was in a hole. She too could climb a tree.