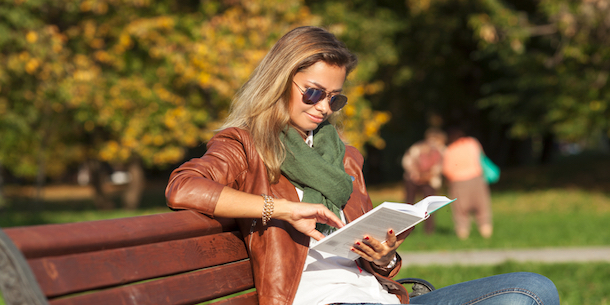 In the current issue of The Saturday Evening Post, Amazon editor Chris Schluep gives his picks for fall fiction and nonfiction coming in the next month or two. I’d like to add five more titles to the list:

Speaking of the 50th season of 60 Minutes, here’s a video tribute from CBS Sunday Morning. My favorite part is what Harry Reasoner does at the 11-second mark:

The End of the World Has Been Rescheduled

This is the second time a story about the end of the world has appeared in this column in the past few weeks, but I’m really not trying to turn it into an ongoing commentary on the world’s mortality. In fact, I have good news: The world didn’t end last week.

If you didn’t hear, the world was supposed to end on September 23, according to Christian numerologist David Meade. It’s a long story, but apparently a mysterious planet named Nibiru was supposed to hit Earth on that day, and we’d all be gone. But if you’re reading this, it obviously didn’t happen (unless heaven has Wi-Fi).

If you’re disappointed, there’s more good news! He says the day has just been moved to October. He doesn’t give an exact date, but it’s sometime in the middle of the month, when something will happen that will start seven years of horrible events that will destroy the planet.

I wish he’d be a little more specific because I have a dentist appointment on October 18.

Gatorade Has Agreed Not to Make Disparaging Remarks about Water

That’s one of the oddest lines in a news story I’ve seen recently, but it’s actually part of a $300,000 settlement that the state of California reached with Gatorade. A video game that the company put out called Bolt! (starring runner Usain Bolt) downplayed the health benefits of water. The game said that athletes should avoid water and instead drink Gatorade. In fact, the game had a scoring system where a player’s power would go up when they drank Gatorade and down when they drank water.

In a plot twist, the first ingredient listed on Gatorade’s label is water.

One Man’s Trash Is This Trash Man’s Treasure

Nelson Molina was a sanitation worker in New York City for over 30 years, but he had a hobby, too. He was always on the lookout for cool stuff that people were throwing away. And I don’t mean a few knick-knacks here and there; I’m talking about thousands of items, from rare artwork and entertainment collectibles to manual typewriters, housewares, and furniture. There’s enough stuff to fill the entire second floor of the sanitation depot where he used to work. Here’s the story from (again!) CBS Sunday Morning.

The amount of stuff he has collected over the years is astonishing. It’s better than most collectible or antique stores I’ve been in, and I’m very jealous.

I saw Zappa in concert twice in the 1980s, but it was different than how fans will see him in an upcoming concert tour. For one thing, Zappa died in 1993.

That’s right, the brilliant musician is going on tour again even though he’s no longer with us. The Zappa Family Trust and Eyellusion announced last week that they’ve made a deal to create a hologram of Zappa and have him “perform” with musicians that he played with many years ago, including Steve Vai, Vinnie Colaiuta, and his children Dweezil and Moon Unit. The concerts will feature classic songs as well as music that has never been released.

Hugh Hefner, the founder of Playboy and the envy of men everywhere, died Wednesday night at the age of 91. He started the men’s magazine while he was still in college. The first issue, in December 1953, had Marilyn Monroe on the cover.

Playboy was always interesting because, while you could read it for the, well, pictures, it really wasn’t a joke to say “I read it for the articles” because the articles and stories and interviews were often excellent. The Post published two stories on the man behind the myth.

Liliane Bettencourt was the L’Oreal cosmetics heiress and the richest woman in the world, with an estimated worth of almost $40 billion. She died last Thursday at the age of 94.

Bernie Casey was an ex-football player who became an actor who was in everything, from the movies Boxcar Bertha, Bill and Ted’s Excellent Adventure, and Revenge of the Nerds, to TV shows like Bay City Blues and Star Trek: Deep Space Nine. He died last week at the age of 78.

Basil Gogos was an artist who created fantastic portraits of classic movie monsters like Frankenstein, Dracula, and The Wolf Man, many for the magazine many of us read before going to bed: Famous Monsters of Filmland. He died September 13 at the age of 88.

Not only did the influential Fitzgerald write for The Saturday Evening Post, we had a hand in the creation of The Great Gatsby.

People who listened to the debate on the radio thought Nixon had won, while people who watched it on TV gave it to Kennedy. (Nixon perspired a lot and didn’t want makeup.) Here’s video of the debate:

If you look closely at this cover by George Hughes, you can see that the house the people are touring is going for $29,995. The average 1950s home went for $18,000. Either way, that’s a lot less than what the houses go for on House Hunters, where people who spend $300,000 on a house get upset if one of the rooms has ugly wallpaper.

Everything You Know about Toll House Cookies Is Wrong

Since I’ve always been a pop culture food history geek, and Sunday is Homemade Cookie Day, this story intrigued me. The recipe for Toll House Cookies we’ve been using all these years? It’s wrong.

We’ve always been told that the recipe by Ruth Wakefield of the Toll House Inn in Whitman, Massachusetts, that’s on the back of Nestle’s Semi-Sweet Morsels is the original recipe for the cookies. But in this terrific interview by WCVB’s Maria Stephanos, Peg Brides, the daughter of Wakefield’s baker Sue Brides, reveals that the recipe that Wakefield and her mom came up with is actually different from the one that’s on the bag. Some of the ingredients are in different amounts (you should use less baking soda and more eggs), and some of the ingredients shouldn’t be used at all (Brides uses Crisco instead of butter)! The original recipe makes the cookies come out smaller and more crisp than the ones we’re used to.

I have a feeling cookie fans are going to talk about this. This could even rival the Great Dress Debate of 2015.

But here’s the thing: If the recipe that’s on the bag is the one we’ve all been using for generations, isn’t that the “real” recipe, even if it isn’t the REAL real recipe? I mean, if you’ve been making the cookies the way Nestle (who bought the recipe from Wakefield) says you should make them since you were a kid, isn’t that recipe legitimate? Sure, it’s interesting from a food history standpoint that the original recipe is different — and we can certainly make those cookies too! — but I think a lot of people will simply keep making them the same way they always have because they also have their own history and they really like them.

Oh, I bet everyone just loves this month-long event. They must be soooooo happy that it even exists. I bet everyone is just going to be freaking out about how great the day is.

The cases the court will ponder this term include government access to smartphone location data, religious exemptions to anti-discrimination laws, and individual state’s rights to allow sports betting.