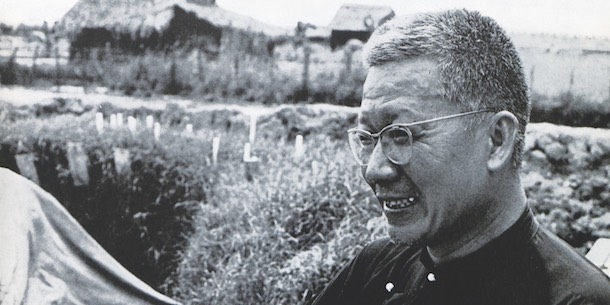 This article and other features about America in Vietnam can be found in the Post’s Special Collector’s Edition, The Heroes of Vietnam. This edition can be ordered here.

When I arrived, members of the small “self-defense corps,” which protects Binh Hu’ng from the guerrilla raiders, were drawn up smartly in military formation. I was startled and deeply touched. Many of them raised their hands in a familiar three-fingered salute. They were former Boy Scouts, and it was the only military gesture they knew. Something else about them was far more impressive. These volunteer soldiers were cheerful, despite the certain knowledge that before another year is out, two-thirds of them probably will be killed in action.

The leader of Binh Hu’ng village is the Rev. Augustine Nguyên Lac Hoa, a stocky, bespectacled Catholic priest who was once a lieutenant colonel in the Chinese Nationalist Army. He led the group — originally 375 settlers — out of South China, into Cambodia, and finally to the mud flats and mangrove swamps of South Vietnam, where their settlement has more than tripled in size. When I asked Father Hoa why his self-defense soldiers volunteered for so bleak a life and almost certain death, he smiled warmly and replied, “Man was born to do something.”

Vietnamese authorities recently estimated that 500 loyal villagers are killed every month in the fight against these guerrillas. But they say guerrilla casualties are even higher. If other villages are as resourceful as Binh Hu’ng, this is probably true.

For three months in 1959, Binh Hu’ng was peaceful. Then the Viet Cong guerrillas attacked. Lacking weapons, the settlers fought back with Boy Scout staves and knives. It seems almost incredible, but when the Viet Cong struck, the weapon-poor villagers promptly counterattacked. They had to close with the enemy quickly to make their knives and staves effective. The Binh Hu’ng villagers lost a few men, but they captured several American-made M-l rifles and a Browning Automatic Rifle (BAR) from the guerrillas.

From that time on, the attacks were incessant. Father Hoa knew that knives and staves supplemented by a few rifles and a BAR were no match for guerrilla firepower. He appealed to President Ngô Ðinh Diêm and got funds — $12 per month per man — and a scattering of weapons for a 300-man self-defense force. The weapons, some of them predating World War I and as varied as the armies of the world, were left over from stockpiles taken from the Binh Xuyên, a private army of racketeers and adventurers which the government disarmed in 1955. Father Hoa would have liked American weapons, but United States military aid cannot be given legally to such an irregular force.

Father Hoa searched throughout free Vietnam for experienced guerrilla fighters. He promised them a life of hardship with frequent combat, little pay, and probable death. Gradually he recruited 300. Officers and men received the same pay. When I visited Binh Hu’ng, the force had grown to 340 “regulars” and 80 recruits in training. Father Hoa pays the extra 40 “regulars” out of his own pocket. The 80 recruits get nothing, only food from the village.

Although they get virtually nothing in return for defending Binh Hu’ng, the corpsmen are tough and canny fighters. And they make the most of their limited weapons. The heaviest of these are two mortars, a 60 mm and an 81 mm, which have been calibrated to zero-in all the approaches an attacker can use against the village.

The villagers rarely wait patiently to be attacked. Self-defense soldiers move out into the surrounding area to strike the guerrillas when Viet Cong troop concentrations are discovered. Patrols push out daily in search of the communist forces.

Although one thinks of remote villagers in a primitive land as dwelling behind a natural curtain of ignorance, the self-defense troopers are remarkably well informed. A flow of information comes to them from daily Voice of America broadcasts and from the Free Pacific Press, which beams Vietnamese-language broadcasts and publishes newspapers and magazines in English, Chinese, and Vietnamese from Cho’ Lo’n. The troops spend two hours every day discussing the meaning of the news. Afterward there is a lively discussion of a single political subject.

Two months before my visit, the troops started talking about “What Freedom Means to Me.” They were still going strong on the subject when I left. The light in their eyes when they talked about freedom showed that it was not mere oratory. Freedom is precious to them, a personal thing. This apparently is what gives them confidence that they will defeat the Viet Cong guerrillas, and a greater confidence that free men everywhere will win out against communism. Repeatedly they asked me for assurance that the United States would stand firm in its policy in Asia, and particularly in Laos.

When I was preparing to leave Binh Hu’ng, these same grinning soldiers clustered around the village helicopter landing pad to say goodbye. They predicted that, with the dry season starting, the Viet Cong guerrillas would be able to move about more freely. “It will really be war now,” one of them said. We shook hands in parting. “Next year,” said one of the smiling troopers, “you will see somebody else here. Two hundred of us will be dead then.”

They drew up in a smart military formation as the helicopter’s blades started rotating. Then they saluted. It was the three-fingered Boy Scout salute again!

Postscript: A year later, the Post sent journalist Don Schanche to Binh Hu’ng to find out what happened to those determined warriors. In the year since the American officer’s visit, they had lost not 200 men, but 8. They counted 500 V.C. dead. Schanche concluded that “the Binh Hu’ng soldiers had all but eliminated the Viet Cong menace in their area.” One of the locals is quoted as saying his village was now “the safest place in Vietnam.”