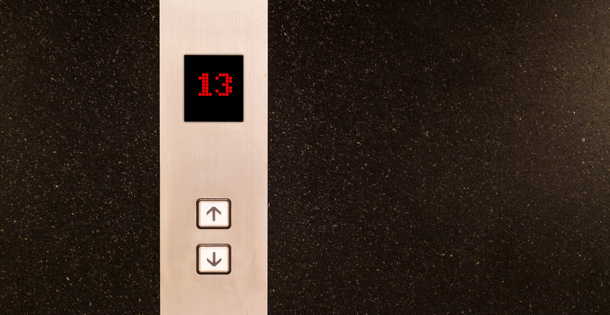 The legend, at least, was that the view up there was beautiful.

In the nearly two decades that Steve Reeb had worked in the building he had never gone up to the 13th floor. His department was located on 12, and he never had a reason beyond itching curiosity to venture up the flight.

But how many times had his finger strayed over the forbidden elevator button?

Now, idling in his car in the parking lot in the fading winter light, he no longer itched. He fairly burned.

Lynn had urged him that morning to drive away and never look back. He knew his wife was right — better to leave head held high.

“Don’t take it personal,” she had begged him, pressing his gray head against her own. “It’s just the times. You lasted longer than anyone.”

What was she afraid of? In the rearview mirror he glanced at his face — lined and imperfectly shaven.

Haunted, perhaps. But disgruntled? He loathed the word.

His gray eyes roved back to the building. A spider fern and a box of possessions — mostly paperclips and hobby photographs of birds — slumped in the passenger seat.

A gust of wind rolled off the river and struck the car door like a bowling ball. Still, he stared.

I lasted longer than anyone. A realization crept into Steve Reeb’s mind. I’m the only one who remembers what happened.

A sudden buzz in his pocket almost made him cry out. He fumbled for the phone.

It was a text from Lynn: “See you soon. Did they give you a ‘retirement’ present?”

He pocketed the phone without answering. He reached for the ignition. Turned it off.

Steve Reeb had made up his mind.

Feeling beneath his seat, he ripped something from its case unceremoniously and tucked it under his coat.

The car door slammed and he directed his feet towards the lobby.

Inside, he headed straight for the bank of elevators. He moved swiftly and tried not to look at anyone. The faces he met were all unfamiliar — ordinary souls from the other floors whose names he never learned and departments he could only guess.

He was relieved to find himself alone in the empty silver elevator car. If he encountered one of his own coworkers — someone he cared about like Darryl, Mike, or Janet — he knew he would lose his nerve.

But alone, absent questions or prying eyes, he depressed the 13th button. Part of him doubted whether it even functioned any more. But the numbers glowed to life, and he felt the car lurch upwards.

Steve Reeb rose in body. But in spirit he sank backwards in time.

He had been on the job just a matter of months when it happened. If memory served, he had just come back to his desk from getting a fresh cup of coffee, was just settling down in his chair when he heard the first screams through the ceiling.

I just sat there, he confessed to the empty elevator car.

I just sat there.

One small step for a man. His heart beat painfully. One giant leap for Steve Reeb.

Instead of the moon, he found himself standing on a thickly dusty office carpet in a spare and abandoned cubicle farm.

Most of the furniture had been removed. What was left — chairs and a few desks with unplugged phones — were covered in white sheeting. Even beneath their shrouds, they looked outdated. The plastic had all yellowed.

Of course, the whole floor has been shuttered after the incident. They picked up and moved the entire department to another building. Some of the survivors never came back to claim their belongings.

Tragedy never sleeps. It hung in the air around Steve Reeb like invisible smoke.

And if the news reports were right, behind one of these desks the shooter had turned the gun on himself.

He moved slowly towards the large bank of windows where the late afternoon light poured and pooled on the carpet beneath.

He tried not to fixate on the ugly, round putty-filled holes that pocketed the walls. Instead he looked beyond, to the river stretched out like a cool white opal. The ghostly specks were tundra swan.

For a few minutes he watched them dance through new binoculars.

He tucked his “retirement” gift back under his coat and turned to leave. He had seen enough to know the legend was true, and he would drive away without glancing back.