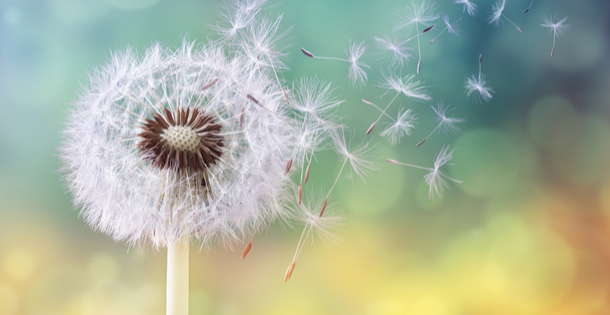 Just saying the name dandelion might conjure images of a “dandy lion” — a cartoon King of the Jungle, ruling over a land of joy and gaiety, his mane shimmering in the African sun in the same bright yellow hues that we find in the proliferative weed. Although the name dandelion is linked to the King of the Jungle, it has nothing to do with the color of his coat or of the weed’s bloom.

The name dandelion comes from the jagged shape of its leaves, which the Medieval French likened to the teeth of lions. Dent-de-lion they called them — literally “lion’s tooth,” from the Latin dens leonis. The name entered English in the 14th century, during a time when French was the primary language of the ruling class in Great Britain, and it eventually transformed into the dandelion we know today.

Interestingly, though the modern word for dandelion in Italian, Portuguese, Spanish, and even non-Latinate Norwegian (løvetann) and German (Löwenzahn) all trace back to transliterations of “lion’s tooth,” the French now call the dandelion le pissenlit, which literally means “to wet the bed” (lit is French for “bed”) — because dandelions have diuretic properties.