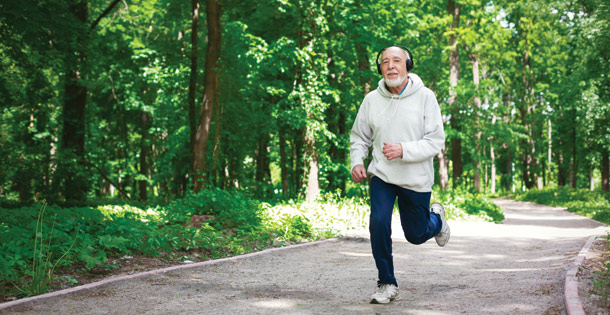 The pressure most of us feel to remain fit, slim, and in control of one’s body does not end with old age — in fact, it only grows more insistent. Friends, family members, and doctors start nagging the aging person to join a gym, “eat healthy,” or, at the very least, go for daily walks. You may have imagined a reclining chair or a hammock awaiting you after decades of stress and, in the case of manual laborers, physical exertion. But no, your future more likely holds a treadmill and a lat pull, at least if you can afford to access these devices. One of the bossier self-help books for seniors commands:

Exercise six days a week for the rest of your life. Sorry, but that’s it. No negotiations. No give. No excuses. Six days, serious exercise, until you die.

The reason for this draconian regime is that “once you pass the age of 50, exercise is no longer optional. You have to exercise or get old.” You may have retired from paid work, but you have a new job: going to the gym. “Think of it as a great job, which it is.”

People over 55 are now the fastest-growing demographic for gym membership. A few gyms, like the Silver Sneakers chain, deliberately target the elderly, in some cases even to the point of discouraging those who are younger — on the theory that older folks don’t want to be intimidated by meatballs or spandexed sylphs. If the mere presence of white-haired gym-goers isn’t enough to repel the young, some gyms don’t offer free weights, partly because the sound of falling weights is supposedly annoying to older people and partly because older people, who are more likely to use exercise machines, may see them as a reproach. In the mixed-age gym I go to, membership tilts toward the over-50 crowd, where “exercise is no longer optional.” The more dedicated may use the gym as only part of their fitness regimen; they run in the morning or bike several miles to get there. Mark, a 58-year-old white-collar worker, does a 6 a.m. workout before going to work, then another one after work. His goal? “To keep going.” The price of survival is endless toil.

For an exemplar of healthy aging, we are often referred to Jeanne Louise Calment, a Frenchwoman who died in 1997 at the age of 122 — the longest confirmed human life span. Calment never worked in her life, but it could be said she “worked out.” While he was still alive, she and her wealthy husband enjoyed tennis, swimming, fencing, hunting, and mountaineering. She took up fencing when she was 85, and even at 111, when she was in a nursing home, started the morning with gymnastics performed in her wheelchair.

Anyone looking for dietary tips will be disappointed; she liked beef, fried foods, chocolates, and pound cake. Unthinkably, by today’s standards, she smoked cigarettes and sometimes cigars, though anti­smoking advocates should be relieved to know that she suffered from a persistent cough in her final years.

This is “successful aging,” which, except for the huge investment of time it can ­require, is almost indistinguishable from not aging at all.

From the book Natural Causes: An Epidemic of Wellness, the Certainty of Dying, and Killing Ourselves to Live Longer, Copyright © 2018 by Barbara Ehrenreich, published by Hachette Book Group.

This is an excerpt from an an article that appears in the September/October 2018 issue of The Saturday Evening Post. Subscribe to the magazine for more art, inspiring stories, fiction, humor, and features from our archives.