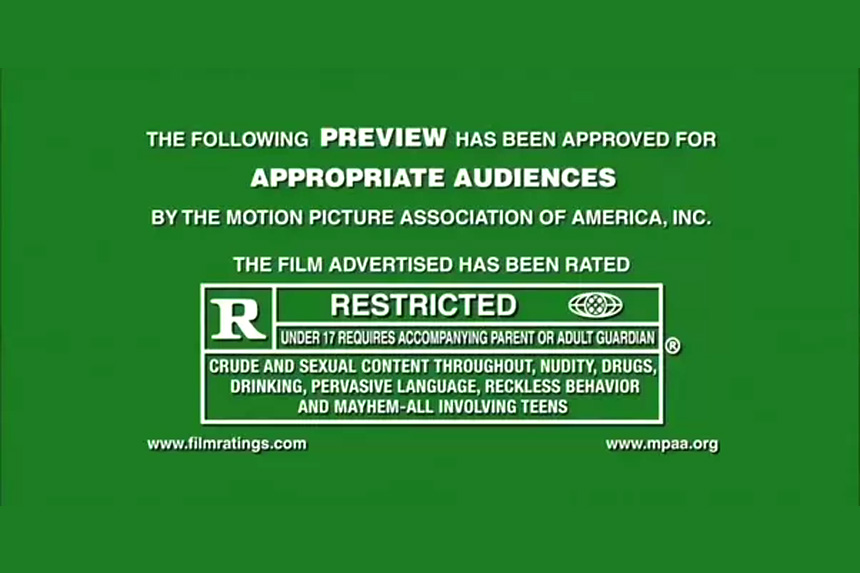 Sex and violence. Foul language. Gore. Socially unacceptable behavior, including the glorification of criminals. Dark subject matter and gallows humor. In others words, a good time at the movies.

But what might be a good time for one person might be a little too much blood and guts for another. How’s a moviegoer supposed to know what they’re in for?

For years, different offices and local review boards tried to apply different standards and rules to acceptable content in motion pictures. This was in addition to a strict Motion Picture Production Code. Fifty years ago, the Motion Picture Association of America tried to take the reins and codify a system that could be employed across all of the film.

The Motion Picture Production Code debuted in 1930 from the MPAA’s forerunner, the Motion Picture Producers and Distributors of America. It applied a number of standards that might be considered humorous today, including a three-second on-screen-kiss time limit. By the 1960s, the envelope was constantly being pushed by young directors and foreign filmmakers, a need to separate what was available on film versus what was widely available on television, and an audience that had become more sophisticated about adult themes that had once been considered off-limits for film].

The MPPDA had evolved into the MPAA in 1945, and by the late 1960s, its president, Jack Valenti, knew the old code was out of date; he went so far as to say that it had “the odious smell of censorship.” With a goal of acknowledging “the irresistible force of creators determined to make ‘their films,'” and to avoid “the possible intrusion of government into the movie arena,” the MPAA created a new system.

The original version from 1968 contains four ratings: G (General Audiences); M (Mature audiences with parental guidance suggested); R (Restricted, no one under 16 without a parent or guardian); and X (no one under 16). That was tinkered with over the next two years, with some age adjustments (the 16s were increased to 17) and M being changed to GP and then PG. By 1972, the system was G, PG, R, and X, and it would remain that way for years. That makes it a great place to stop and examine five scandalous film rating controversies.

Midnight Cowboy courted controversy right from the start. Based on the novel by James Leo Herlihy, the John Schlesinger-directed film drew the attention of the ratings board for its frank depiction of sex, male prostitution, and themes of homosexuality. Though initially granted an R, executives at United Artists decided to accept an X; according to Tino Balio’s book, United Artists Volume 2, 1951–1978 : The Company That Changed the Film Industry, the studio made the move after being advised by a psychologist that the film could be a “possible influence upon youngsters.” The X didn’t stop the film from being critically acclaimed; in went on to take Best Picture, Best Director, and Best Adapted Screenplay (for writer Waldo Salt) at the 1970 Academy Awards. In a bit of irony, when the age ranges were moved in the 1972 MPAA ratings change, Midnight Cowboy was reclassified an R and has retained that rating since.

Steven Spielberg was the undisputed King of Hollywood in 1984. He’d already directed future classics and huge hits like Jaws, Close Encounters of the Third Kind, Raiders of the Lost Ark, and E.T., and produced the hit Poltergeist. In 1984, he’d direct the Raiders sequel Indiana Jones and the Temple of Doom and produced Gremlins. Temple and Gremlins both carried PG ratings, which left a number of parents concerned when the saw the films with their kids. Temple featured some significant violence, including one scene where a man’s still-beating heart is removed from his chest; Gremlins featured a number of gross-out special effects and Phoebe Cates’s infamous monologue about the death of her father (while trying to surprise her while dressed as Santa, he attempted to climb down the chimney, became stuck, and died, leading to the young girl learning that there is no Santa). When the MPAA looked at the ratings in light of the complaints, they the challenge of determining what might be appropriate, considering that the definition of what was okay could be unique for different parents and different children. Spielberg himself suggested an intermediate rating between PG and R, and the result was the MPAA’s creation of PG-13. PG-13 came with the verbiage “Parents Strongly Cautioned – some material may be inappropriate for children under 13,” and it was first applied to John Milius’s Red Dawn later that year.

Gene Siskel and Roger Ebert fiercely criticized the MPAA in their review of Henry: Portrait of a Serial Killer from their program Siskel & Ebert & The Movies in 1990.

During the independent film boom of the late 1980s and the early 1990s, it became apparent that the MPAA had a X rating problem. A lack of copyright for ratings allowed any producer of pornography to apply an X rating to their film, leaving no distinction between an artistic film that might push boundaries and a pornographic work. This problem came into sharper focus with the production of three challenging films: Henry: Portrait of a Serial Killer (1989), The Cook, The Thief, His Wife, and Her Lover (1990) and Tie Me Up! Tie Me Down! (1990). All three films were released unrated because the MPAA declined to rate them lower and the studios would not take an X rating, given its association. Mainstream theatre chains were also declining to show films with an X, severely limiting the film’s opportunity to be seen and make money. This left a void for movies made for adults that dealt with graphic violence (as in the case of Henry) or frank depictions of sexuality (as in the other two). A new rating was proposed; NC-17 meant “No Children Under 17 Admitted.” The first film to be released with the new rating was Henry & June, Philip Kaufman’s adaption of  Anaïs Nin‘s book about her affair with author Henry Miller and his wife, June. In 1996, NC-17 was revised to mean “No One 17 and Under Admitted,” effectively raising the bar of admission to age 18.

The original trailer for Clerks.

This was a first: a film that almost drew an NC-17 rating for language only. Such was nearly the fate of Clerks, the debut film from New Jersey writer-director Kevin Smith. Smith sold part of his comic collection to raise the $27,000 he needed to make the film, a black-and-white comedic look at one long day in the lives of two twentysomething shop clerks. The outrageous humor and pop-culture-fueled dialogue made it an audience favorite and an award-winner and nominee at Sundance, Cannes, and the Independent Spirit Awards. When the film was acquired by Miramax for distribution, it got slapped with an NC-17 solely for the language; the film features almost no violence and no nudity. Famed attorney Alan Dershowitz represented Miramax on appeal, and the film was released with an R with no changes.

South Park courted controversy for its crude humor from the moment in debuted on Comedy Central. When a film version was announcement, everyone expected there to be some wrangling the MPAA. No one expected that the film had to be reviewed six times by the board before it would be granted an R rating. The process ran up until two weeks before the film was due to be released. South Park co-creator and director Trey Parker expressed his incredulity to The New York Times at the time; he noted that there was no discussion of the violence in film, saying, “The ratings board only cared about the dirty words; they’re so confused and arbitrary.” The film went on to be a huge hit and earned an Academy Award nomination for the song “Blame Canada.”