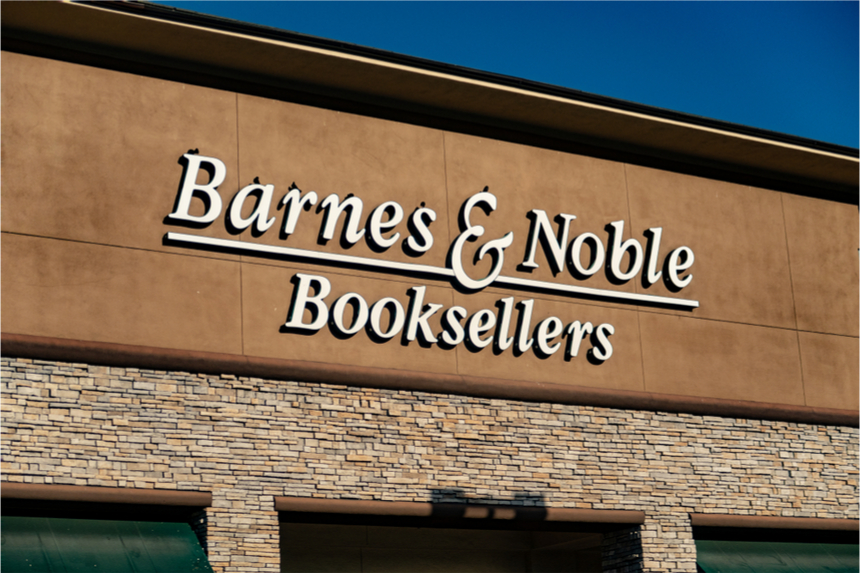 I love Amazon. It’s really great that I can order books, DVDs, and a six-pack of underwear and have them delivered to my home in just a couple of days. If you plan your online ordering life carefully, you never have to leave your home again!

But I love bookstores too, and I don’t want them to go away.

That’s always the fear with Barnes & Noble, of course. While more and more independent bookstores seem to be popping up, the chains aren’t faring as well. We’ve already seen chains like Borders and Book World go away, and now B&N is for sale. This announcement has made the stock surge, but this apparently is a bad thing. I’ve never understood the stock market.

I really don’t know what they can do to survive. They can make their stores smaller and cut down on their inventory of non-book items and have author signings and other community events, but Amazon is still going to be around (and now they’re opening up brick-and-mortar stores themselves!). But they have to do something. A world without Barnes & Noble would be a weird world.

I say they get rid of the NOOK eBook reader (really, who cares?), partner with other companies that make items you can’t find in many other places, make their cafes so comfortable that people want to sit there all day and buy expensive drinks (I’d love to talk to the person who designed the tiny tables), and just change the overall design of the stores. Celebrate the long history of the chain and make people happy that real bookstores still exist beyond the bits and bytes.

This Artwork Will Self-Destruct in Five Seconds …

The artist/prankster pulled perhaps his greatest stunt last week in London. Right after his painting Girl with Balloon was purchased at Sotheby’s for $1.4 million, the painting suddenly slid down past the frame and was shredded!

Here’s video of the shredding posted on Banksy’s official Instagram account, along with footage of him putting the shredding device into the frame a few years ago in case it ever came up for auction.

Today a local news anchor said that anyone who would pay $1.4 million for this painting deserved to have it shredded, but the joke’s on that local news anchor. It’s going to be even more valuable now.

Frankenstein; or, the Modern Prometheus

That’s the full title of the classic Mary Wollstonecraft Shelley novel. 2018 marks its 200th birthday. Shelley published it when she was only 20 (first anonymously, and then her name appeared on the cover of the second edition), and some consider it the best horror novel ever written.

This is the perfect time of year to read the novel, and you can do that for free at Project Gutenberg. The Corey Helford Gallery in Los Angeles has a group show this week (it ends Saturday) featuring dozens of artists celebrating the monster with original paintings and sculptures, and here’s Boris Karloff in the pages of the Post in 1962, looking back at his 30 years of making horror movies.

Do You Remember Carbon Paper?

Carbon paper must seem so archaic to younger people. You used to have to make copies of something by getting your hands all black? I’m nostalgic for a lot of things, but I have to say I don’t miss carbon paper at all (though I still use and enjoy Wite-Out).

CBS Sunday Morning had this look back at how essential carbon paper used to be. My favorite part is where they remind us that everyone who uses email uses carbon paper, in a way.

The latest? A photo that supposedly showed an aisle at a grocery store that catered to lonely single people. Specifically it seemed to cater to the stereotype of the lonely single woman who has cats, drinks wine, and eats meals for one. But Snopes figured out that it was actually a photoshopped hoax. (I don’t know if whoever did it actually used Photoshop, but that has become the shorthand for any picture that has been faked. Sorry, Adobe.)

So there really isn’t a supermarket aisle that caters to lonely single people, though an argument could be made that every aisle in the supermarket could be for lonely people. Or they could just buy all that stuff on Amazon.

If there were an aisle for men, it would have dog food, beer, and video games.

Geoff Emerick was the engineer responsible for the Beatles’ sound on such albums as Sgt. Pepper’s Lonely Hearts Club Band and Revolver, as well as albums for other artists. He died last week at the age of 72.

Will Vinton was the animator responsible for the term Claymation, the animation style used in several short films and for characters in TV commercials, including the California Raisins and Domino’s “The Noid.” He died last week at the age of 70.

Peggy Sue Gerron Rackham was the inspiration for the classic Buddy Holly song “Peggy Sue.” She died last week at the age of 78.

Scott Wilson played Hershel on The Walking Dead and appeared in many TV shows and movies, including In Cold Blood, In the Heat of the Night, and the Shiloh films. He died last week at the age of 76.

This is a terrible time to be named Brett Kavanagh

You’ve probably never heard of this show because it ran for only two months, it was broadcast live, and no copies of it exist. According to this 1992 obituary of series creator David P. Lewis, the first episode was filmed in the basement of Wanamaker’s Department Store in Greenwich Village.

Rickenbacker wasn’t just the most successful American World War I flying ace and a Medal of Honor recipient. After his discharge, he started the Rickenbacker Automobile Company, owned the Indianapolis Motor Speedway, was in charge of Eastern Airlines, wrote the Ace Drummond comic strip with Clayton Knight, and was the inspiration for Rickenbacker Guitars, co-founded by his cousin.

There’s a certain power in a great magazine cover, like this one from Stevan Dohanos. Right after I found it, I had the sudden urge to go to the store and buy some apple pie and milk. So I did.

By the way, if you’d like to browse this issue, you can read it online. All you have to do is become a subscriber and you get to read almost every issue going back to 1821. It’s only $15 a year!

I’ve never had gumbo and I never will. I don’t like most seafood (I’d rather eat crayons than eat shrimp), and even the word turns me off for some reason. Gumbo.

But if you like it, here’s a Seafood Gumbo recipe from Taste of Home. It includes shrimp, but it says you can substitute any seafood of your choice. Chicken can be considered seafood, right?

Note: This holiday should not be confused with A Gumby Day. That’s a completely different thing.

I can celebrate at least half of this holiday.

I think it’s great that there’s a day set aside to remind people to do this, but the scary thing is that there are many people (I’m talking to you, men I see enter and exit restrooms without washing their hands) who won’t do it this day because they don’t do it the other 364 days of the year.