There comes a time in every kid’s life when that dark question arises: Is Santa Claus real or just a four-ply fraud, like Pinocchio or Reddy Kilowatt?

At the age of 8, I’d already uncovered some pretty damaging evidence for the tall-tale theory. First of all, I never noticed an actual chimney on any of the Mathews flats on Putnam Avenue, just those tiny vent stack things that O’Reilly the plumber said had something to do with the “sanitary facilities.” No way! Besides, I was a rotten kid but got presents galore anyway.

Also, a lot of the stuff was marked “Made in Occupied Japan.” Had Santa ditched his elves and gone offshore to save a few bucks? It was an academic question, though. My heart was set on something the fat man in the red suit probably didn’t have in stock anyway.

Could any ordinary gift top TeeVee Time’s Deluxe 65-piece Unbreakable Plastic Outer Space Figure Play Set? I thought not! The best is the enemy of the good, and this was a true classic. Oh, rapture! I shamelessly dreamed of thwarting the miscreant, bird-beaked Venusians’ plans to conquer Earth; yearned to command a platoon of green reptilian Martians with their little Woody Woodpecker topknots; and longed to decipher cosmic secrets held by the bulgy-eyed purple Jovians, who bore an odd resemblance to Mr. Cardelli down at the laundromat.

The set came free with a new television, but I doubted Santa would mess with that. Did they even have TV at the North Pole? In Occupied Japan? Should I write to the Big Guy directly and plead my case? Probably not. Old Mr. Nagelpilz down the hall said it was common knowledge that the Post Office carted off “Santa Claus letters” straight from Brooklyn to some shredding graveyard in Manhattan. Morons!

All wasn’t lost, though. Mrs. Geiger, who taught third grade at P.S. 13, had latched onto one of the prized play sets up on Fresh Pond Road at the questionably named Bargains Galore Appliance Store owned by one Ernie “How can I make a dime when I hand out deals like this?” Papadakis.

Turned out our beloved teacher didn’t even want this gem now in her possession; she was going to give it away! But there was a catch.

“This will be given to whomever brings the most interesting item to show-and-tell on Friday,” Mrs. Geiger said sweetly. “Try to select something that will appeal to everyone.” That was it! I’d bring the fake shrunken head that the Old Man had ordered from the Johnson Smith catalogue. Why, Uncle Henry nearly lost his upper plate when I hid it in the medicine cabinet last month! How could I lose?

When the big day arrived, I was more confident than ever. Mrs. Geiger’s little dog and pony show had attracted some pretty feeble competition. Cara Duffy dragged in some boring dolls’ clothes she’d sewn, the McSween brothers brought a corroded Zippo lighter their uncle supposedly carried at Guadalcanal, and Jimmy Elgin’s entry was a dorky bag of marbles. Mrs. Geiger smiled politely.

Now it was my turn! Aiming for a dramatic theatrical effect, I yanked the shrunken head from its genuine Carpathian oak carrying case and plopped it straight onto Charlotte Cernik’s desk. Charlotte wailed like a banshee, flailing her arms and sending the “precious” Elgin Marble Collection flying.

Mrs. Geiger wasn’t the least bit amused. “William,” she said icily, “that was not a suitable item for show-and-tell. Please collect all the marbles and return them to Jimmy.” There must have been a thousand marbles; it took a half-hour to police them up.

Even worse, Danny “Mr. Know-It-All” Squadron had charmed the prize of a lifetime from Mrs. Geiger with some crummy seashells he’d collected at his grandfather’s place in Florida. Danny’s pockets were filled with shells, and Mrs. Geiger fawned all over him as he parceled them out to the kids in class. “Oh, how lovely and colorful,” she gushed. “Thank you for sharing them with us.” Gag!

Phooey on seashells! Phooey on Florida! And especially phooey on Danny Squadron!

When school let out, I encountered my newfound enemy slurping down a chocolate egg cream at Goldie’s candy store. I wanted nothing more than to make him feel like a complete worm’s turd.

“You know, Squadron, I really wanted that outer space set,” I said, venom dripping from each word. “I guess at least you’ll have a merry Christmas.”

He looked at me oddly. “We don’t celebrate Christmas at my house.” What? I’d never heard of such a thing. I trolled the depths of my legendary reservoir of tactfulness to hook just the right reply. “Boy!” I sniffed,” that’s about the dumbest thing I’ve ever heard!”

A smile flickered across my classmate’s face, but I barely noticed. I could think of nothing but the treasure box cradled under his arm. “Billy, you know I —” he started to say. But I held up the palm of my hand. “I’d better get going now. I might have to write that letter after all.”

It snowed Christmas morning, and “Santa Claus” was good to all of us. My mother was delighted with her new book, “Potato Salad Recipes from Around the World,” and the Old Man got his wish, too: a gallon of his favorite aluminum radiator paint and a new brush to go with it. He turned to my mother with a big smile. “Oh, hon, it’s natural bristle! You shouldn’t have!”

As for me, a Chemcraft set filled with containers of evil-looking powders and liquids filled the bill perfectly — almost. “Merry Christmas, Billy!” the Old Man laughed. “Just don’t blow up the house.”

I was checking out a vial of sodium ferrocyanide — which sounded a lot more promising than it turned out to be — when there was a loud knock at the door. I thought it might be the D’Angelos with their stupid dog in a Christmas hat. But the front stoop was bare — except for a box wrapped in plain brown paper, and a set of footprints headed toward Knickerbocker Avenue.

Could it be? Yes! I tore the wrapping paper to shreds, and there it was — the TeeVee Time Deluxe 65-piece Unbreakable Plastic Outer Space Figure Play Set in all its Technicolor glory! But how did it get there?

As I turned to go back inside, something crunched under my heel, something hard and brittle like a Christmas ornament. I poked my finger into the snow and retrieved not a broken ornament but a yellow-orange seashell crushed to bits. What the … ? I toyed with the tiny shards for a moment, then pitched them back into the snow. Suddenly, it was all very clear. Not every holiday spirit had a white beard or slid down chimneys. Hot dog!

“Honey, you’re letting out all the heat!” my mother yelled from the kitchen. “Who was at the door?” 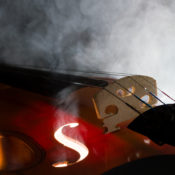