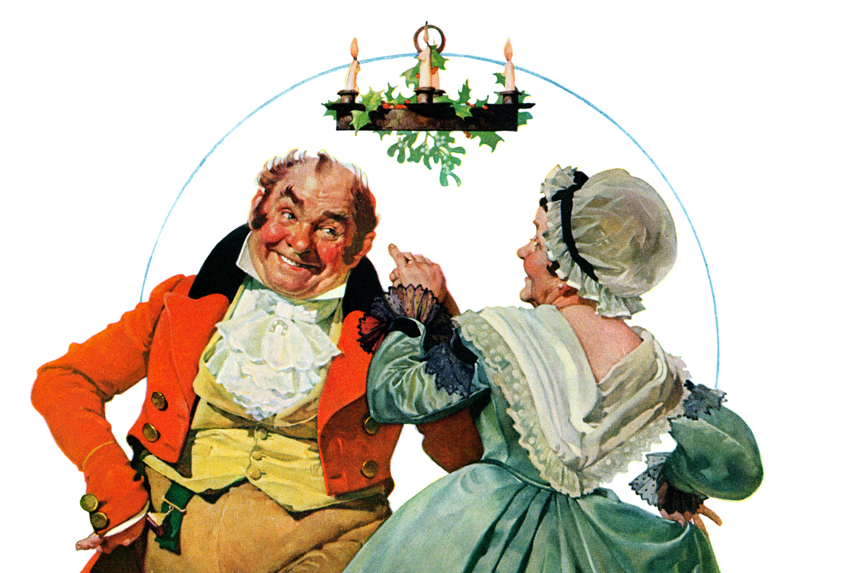 It was customary for George Horace Lorimer, the legendary Post editor who oversaw the publication from 1899 to 1936, to choose only three sketches or paintings at a time for a cover. But that changed in 1920, when Norman Rockwell met with Lorimer and displayed a multitude of holiday sketches—not just for the coming year but for the entire decade.

It was a risky move, but Rockwell had an ace up his sleeve. The subject matter centered on a common theme, the stories of Charles Dickens, and Rockwell happened to know his boss was
a huge Dickens fan. Lorimer gave the entire series a green light.

The first picture for his Dickens series was this illustration of a jocular man wearing a 19th-century hat and holding a cane. When the work was done, the artist confessed to Lorimer that he had dedicated the painting to him. Touched by the gesture, but not one to display sentimentality, Lorimer thanked the young artist with a handshake.

Dickens’ portrayal of Victorian society in London captivated Rockwell. He especially admired the street-corner musicians, talented ragamuffins who depended on the kindness of strangers. Rockwell selected his three models for their outward appearance and not their musical talent. Neither “Pop” Fredericks, Dave Campion , nor Bill Sundermeyer could sing or play a lick!

The cover’s inspiration comes from the scene in A Christmas Carol in which old Mr. Fezziwig, the benevolent master of young Ebenezer Scrooge, shows his guests how to dance: “Then old Fezziwig stood out to dance with Mrs. Fezziwig. … A positive light appeared to issue from Fezziwig’s calves. They shone in every part of the dance like moons. You couldn’t have predicted, at any given time, what would have become of ’em next. And when old Fezziwig and Mrs. Fezziwig had gone all through the dance; advance and retire, both hands to your partner, bow and curtsey, corkscrew, thread-the-needle, and back again to your place; Fezziwig ‘cut’—cut so deftly, that he appeared to wink with his legs, and came upon his feet again without a stagger.”

Competitors of The Saturday Evening Post had a name for the uncanny timing of its covers—“Post luck!” But was it luck? Lorimer, a master of networking and incredibly in tune with trends of the day, knew the movie A Christmas Carol was set to be released on December 16, 1934, one day after this cover would appear on newsstands. The movie’s release date was no great secret, but Lorimer did his homework early and actually contacted Rockwell to propose this cover 11 months before the publication date. At the time, he had inside information that an as-yet-unpublished survey had determined A Christmas Carol to be America’s all-time favorite Dickens story. Moral of the story: Sometimes you make your own luck!

In this third “Merrie Christmas” cover, Pickwick sits patiently waiting for the Muggleton Stagecoach wearing his flannel jacket and white trousers. Unlike earlier paintings from Rockwell’s Dickens series, this one adheres quite precisely to a scene from the original story. Lorimer had recently retired, and the new Post editor issued a directive to Rockwell: He was to represent Dickens’ stories literally; creative interpretation of a writer’s work would not be permitted. Rockwell was not particularly happy about this limitation. But his friend and longtime model Harry Seals (depicted here as Pickwick) suggested that the artist just smile and let his new boss’s words go in one ear and out the other. Seals’ ironic smile seems to convey this very lesson. A footnote: Six months after posing for this painting, and three months after it was published on the cover of The Saturday Evening Post, Seals died. This December 17, 1938, issue was resting on an easel at his funeral.