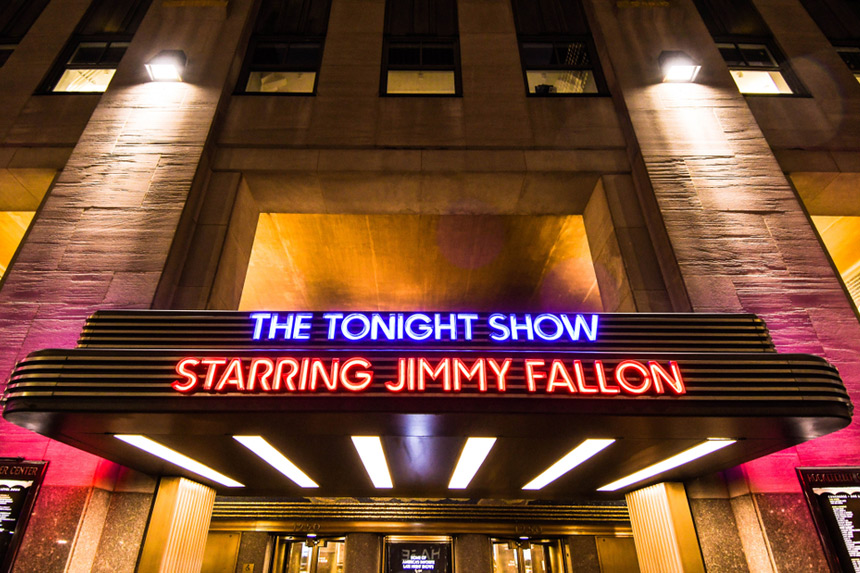 In the long-running Leno vs. Letterman debate, I was Team Letterman all the way.

David Letterman was always my favorite late night host (after Johnny Carson) because his sense of humor jelled with mine, particularly when I was in my 20s, when my humor was more irreverent and cynical. I saw Leno as a great stand-up comic but also the guy who schemed his way into taking away the Tonight Show chair from the guy who should have had it (he hid in a closet so he could eavesdrop on NBC execs!). It didn’t help that Leno didn’t even thank Carson the night that he took over the show.

Of course, as you get older, you begin to mellow in certain ways, and I appreciate Leno more. I still side with Letterman, but I’m not “anti-Leno” anymore. I thought of that this week when Leno gave an interview on Today and said that late night shows have gotten too political. He’s absolutely right.

It’s not that the late night shows can’t and shouldn’t do political humor. From Jack Paar to Carson to Jimmy Kimmel, dumping on politicians has always been a fixture of these hosts. But now, particularly on The Late Show with Stephen Colbert and Jimmy Kimmel Live, political comedy has taken over. And it’s a one-sided type of attack that is very obvious and rather off-putting, not just because you might not agree with their viewpoints but because you may be old enough to remember when we didn’t really know on what side a host stood politically, or if we did, it wasn’t the centerpiece of their entire show.

You expect it from The Daily Show and Full Frontal with Samantha Bee and Last Week Tonight with John Oliver. That’s what those shows are about. But I’d rather turn on my TV at 11:35 and just see a lot more variety and comedy and music mixed with the politics, and not the other way around. (I could say a lot about Jimmy Fallon, but he seems to get this.)

We’re already inundated with political talk and opinions 24 hours a day on cable news and social media, and I’d love to see the late night shows take their foot off the pedal a bit and not be so “serious” about their humor. Most of them don’t want to appeal to everyone anymore.

Now, Leno is wrong and rather hypocritical when he delves into the “civility” of late night. As Oliver pointed out this week, Leno made plenty of distasteful Clinton/Lewinsky jokes during his run. Maybe Leno feels bad now about the jokes, as Letterman and others later said about their jokes. But when Leno calls the current late night shows boring, he has a point. When he says that nowadays everyone has to know your politics, he has a point. All the jokes are about the same thing, and it’s not only tedious, it’s exhausting. It doesn’t even matter if I agree with a lot of what they say; I still find myself veering away from Colbert and Kimmel and watching reruns of Perry Mason or Friends at that time.

Then again, at my age maybe I should just go to bed.

Game Shows Are Back (at Night Anyway)

One of the worst things to happen to television over the past 25 years is the decline of the game show. Mornings used to be jam-packed with them (and soap operas), but now we have to put up with crazy shout-fests like Jerry Springer reruns and reality shows like Hot Bench all day long. Sure, there’s still Let’s Make a Deal, The Price is Right, and Who Wants to be a Millionaire?, but for the most part daytime game shows have gone the way of the late night sign-off.

But we still have game shows at night. Wheel of Fortune and Jeopardy! remain monster hits, and ABC has been slowly adding game shows to their schedule. Now they’re bringing back more classics to join To Tell The Truth, Match Game, and $100,000 Pyramid. The network has announced that they’re doing new versions of Card Sharks and Press Your Luck.

Let’s hope that they do good versions of these shows, because their new takes on To Tell The Truth and Match Game are practically unwatchable. And let’s hope we have people as into the games as Press Your Luck’s Michael Larson was.

So there I was in the supermarket, minding my own business, pushing my cart in the frozen foods section, looking to buy another Marie Callender’s Banana Cream Pie that I probably don’t need, when I almost ran into a robot. I exited the aisle and there was this tall mechanical thing with a fat base and thin, tower-like top. He — and I can call him a he because a clerk told me his name is Marty — suddenly stopped and beeped because he sensed something in front of him. A little light flashed.

When I checked out I asked the clerk about Marty, and she told me that he goes around the store all day, alerting the employees and customers of spills and other problems. The employees can even get on the intercom and call Marty over to their section if they need him. “Marty, we need you in the deli!” He can also keep track of the items on the shelves and tell the store if they’re running low on something.

I mentioned to the clerk that Marty could some day take over her job, but she wasn’t worried. He’s just a helper. For now.

Tomorrow I’m going to go up to him and say “Klaatu Barada Nikto” and see what happens.

There’s a paragraph in this New York Times story about the lengths parents will go to protect their kids when they go to college, and one line really sticks out.

One came home because there was a rat in the dorm room. Some didn’t like their roommates. Others said it was too much work, and they had never learned independent study skills. One didn’t like to eat food with sauce. Her whole life, her parents had helped her avoid sauce, calling friends before going to their houses for dinner. At college, she didn’t know how to cope with the cafeteria options – covered in sauce.

No, it’s not the line about the rats. It’s the one about the sauce. “Her whole life, her parents had helped her avoid sauce.” If that’s not a Lifetime movie waiting to happen, I don’t know what is.

I have so many questions. Is it just tomato or all sauces? Does the fear also include various gravies? Is it the taste she doesn’t like or just the look of the sauce on top of the food? Does she get freaked out by the mere mention of the word sauce? Is her mom Lori Loughlin?

Dick Dale was known as “the king of the surf guitar.” He enjoyed a new wave (sorry) of popularity when his classic instrumental “Misirlou” was used in the movie Pulp Fiction. He died Saturday at the age of 81.

Richard Erdman was a favorite actor of many (including myself) who was in just about everything you may have watched since the ’40s, from film noir (he’s fantastic in Cry Danger) to classic war flicks (Stalag 17 and Tora, Tora, Tora!), and even modern sitcoms (he was Leonard, the senior college student, on Community). He was in dozens of TV shows, did cartoon voices, and was even a director, helming episodes of The Dick Van Dyke Show and films. He died last week at the age of 93.

Birch Bayh, a Democrat from Indiana, served in the Senate from 1963 until 1981. He played the lead role in the passage of two constitutional amendments: the 25th (which deals with presidential disability) and the 26th (which guarantees 18-year-olds the right to vote), and was a champion of Title IX, which banned discrimination of women in colleges. He died last week at the age of 91.

Johnny Thompson was not only a great magician in his own right, often employing humor in his act, he was an adviser to other magicians as well, including Penn & Teller, Lance Burton, and Siegfried & Roy. He died earlier this month at the age of 84.

“If I win, I’ll be the most famous girl gamer of all-time! Also if I lose.”

—Sophie, a member of Bart’s video game team playing for the world championship, on The Simpsons

The website for the politics and public affairs channel has 40 years’ worth of news and articles, including an archive of video interviews of authors from their terrific Book TV series.

The first U.K. album by the Fab Four was Please Please Me and included such songs as “I Saw Her Standing There,” “Love Me Do,” and “Twist and Shout.”

This Week in Saturday Evening Post History: The Beatles (March 21, 1964) Not only is this a great picture of the band, this issue features “original Beatle fiction” from John, “the married Beatle.” If you look closely under that line, the small print says, “If you think their music bugs you, read this.”

The article inside opens with the words “They can’t read music, their beat is corny, and their voices are faint …”

You can do a lot more with peanuts than open a can and eat way too many of them at one sitting. I’m not speaking from personal experience; it’s more of a general observation.

Here’s a recipe from Curtis Stone for Stir-Fried Shrimp with Chiles, Bell Peppers, and Peanuts, and here’s one for Mixed Beans with Peanuts, Ginger, and Lime. Mom’s Best Peanut Brittle sounds great, and so does this Toasted Coconut Sundae.

Note: None of these recipes features sauce.

This day celebrates the rich-in-nutrients chia seed. Of course, you can also call it National Ch-Ch-Ch-Chia Day.

This day was organized by the Tolkien Society to encourage fans to read the works of J.R.R. Tolkien. According to the official site, it’s on March 25 because that’s the date of “the downfall of the Lord of the Rings (Sauron) and the fall of Barad-dûr.” But you knew that already.