This used to be the biggest week in television. It’s the week when all of the networks get together for a big show and introduce all of the new, incredible(?), must-see(?) shows coming this fall, announce the shows they’ve renewed for another season, and destroy the lives of loyal viewers by announcing the shows they’ve canceled.

With all of the streaming services, and the fact that we see a lot of original programming during the summer now and not just reruns and specials as in the days of yore, “Upfronts Week” doesn’t quite hold the same power as it once did. But they still do it, and if you’re a serious TV fan, you’re going to want to take a look at some of the new shows coming up. There’s a new Nancy Drew coming to The CW; NBC has a show titled Zoey’s Extraordinary Playlist, about a woman who is able to hear the thoughts and desires of others expressed through songs (expect an iTunes and CD cross-promotion); Fox has Lincoln, which is about a serial killer (I hope it’s not Abraham Lincoln, because that will rewrite history); and NBC has a new legal show titled Bluff City Law that has been called one of the network’s “buzziest dramas.” Which means it will be canceled after approximately seven episodes.

The CW also has Batwoman. No, not Catwoman, not Batman, and not Batgirl. It’s Batwoman. There’s a “bat” for everyone now.

If you’re wondering which of your favorites won’t be coming back, that list includes Murphy Brown, Life in Pieces, Fam, iZombie, and The Kids Are Alright.

I can’t keep track of TV now. I used to do it with no problem, but now with the hundreds of shows we see every year, from all the broadcast and cable networks and the Netflix and Amazon and Hulu and Warner Bros streaming services … I’m exhausted. I keep forgetting I even have Netflix. I’m behind on so many shows.

Two years ago, I told you about the new retro hotel they were planning for the old TWA terminal at New York’s JFK Airport. It opened on Wednesday, and CBS Sunday Morningwent behind the scenes:

This is something I’ve noticed: people adding an “R” to words. I think I first became aware of it many years ago when I heard Senator John McCain pronounce “Washington” as “Warshington.” I’ve heard it from others too, and I’ve been wondering if it was a regional thing (we here in New England replace our “Rs” with an “H”). John McWhorter over at Slate’s “Lexicon Valley” investigates!

In other language news, the phrase “all set” just might be a regional thing too. Is that true? Let me know below in the comments if you use it and where you’re from. We use it all the time here.

The novelist gave a terrific interview to Glamourlast week and some startling facts were revealed. Not only is Steel worth $350M — not really a surprise, she’s pretty popular — she also works 20 hours a day (on a manual Olympia typewriter!), has nine children, owns 6,000 pairs of Christian Louboutin, and has published 179 books. Meanwhile, I got tired just writing this paragraph.

I was going to say “Boy, I’m in the wrong business,” that line people say when they see how much more money someone makes than they do and how much more they’ve accomplished. But I actually am in that business, so I better get to work.

Doris Day began her career as a singer of classic standards and then suddenly found herself as the star of the film Romance on the High Seas in 1948. She went on to star in three popular romantic comedies featuring Rock Hudson — Pillow Talk (for which she received an Academy Award nomination), Send Me No Flowers, and Lover Come Back — and she also starred in Please Don’t Eat the Daisies, Calamity Jane, With Six You Get Eggroll, The Glass Bottom Boat, and Move Over, Darling. She starred in her own self-titled TV series from 1968 to 1973 and was a well-known animal rights activist. She died Monday at the age of 97.

The Hollywood Reporter has a pictorial look back at Day’s life and career, and Turner Classic Movies will have a marathon of Day’s movies on June 9.

Tim Conway was probably best known for his role on The Carol Burnett Show (where he could often be seen cracking up his costars in the middle of sketches). He was also a regular on McHale’s Navy and appeared in many shows from Ace Crawford, Private Eye and Coach to SpongeBob SquarePants and 30 Rock. He also did a number of videos featuring his really short Dorf character and appeared in several films with Don Knotts. He died Tuesday at the age of 85.

You know Alvin Sargent was a talented screenwriter just from the varied genres he worked in. He could do serious drama (Ordinary People and Julia — he won Oscars for both), comedy (What About Bob? and Other People’s Money), and even superhero movies (he wrote four of the Spider-Man films). He also wrote the Tatum O’Neal film Paper Moon and for many TV shows like Route 66, The Alfred Hitchcock Hour, Ben Casey, and Coronet Blue. He died last week at the age of 92.

Peggy Lipton starred in the ’60s TV drama The Mod Squad as well as the original Twin Peaks and its recent reboot. She also appeared in other shows such as Bewitched, Popular, Wings, and Angie Tribeca, where she played the mom of real-life daughter Rashida Jones. She died last weekend at the age of 72.

Jim Fowler was an animal expert and the host of Mutual of Omaha’s Wild Kingdom. He was one of Johnny Carson’s favorite guests on The Tonight Show, appearing dozens of times, and also made a memorable appearance on an episode of Seinfeld. He died last week at the age of 89.

Kip Niven appeared in the TV shows Aliceand The Waltons, as well as films like the Dirty Harry sequel Magnum Force, Midway, The Hindenburg, and Earthquake. He died recently at the age of 73.

“But the new service isn’t free. Basically, parents, you have a choice: You can either pay $7 a month for Disney+, or raise your children yourselves.”

Dylan — who hadn’t quite reached the level of fame he would later achieve — walked out on the show after a CBS executive told him he couldn’t sing the controversial song “Talkin’ John Birch Paranoid Blues.”

Explorers Meriwether Lewis and William Clark walked too, only not off a popular variety show. They walked across the country.

This Week in Saturday Evening Post History: Drive-In Movie in the Rain (May 13, 1961) 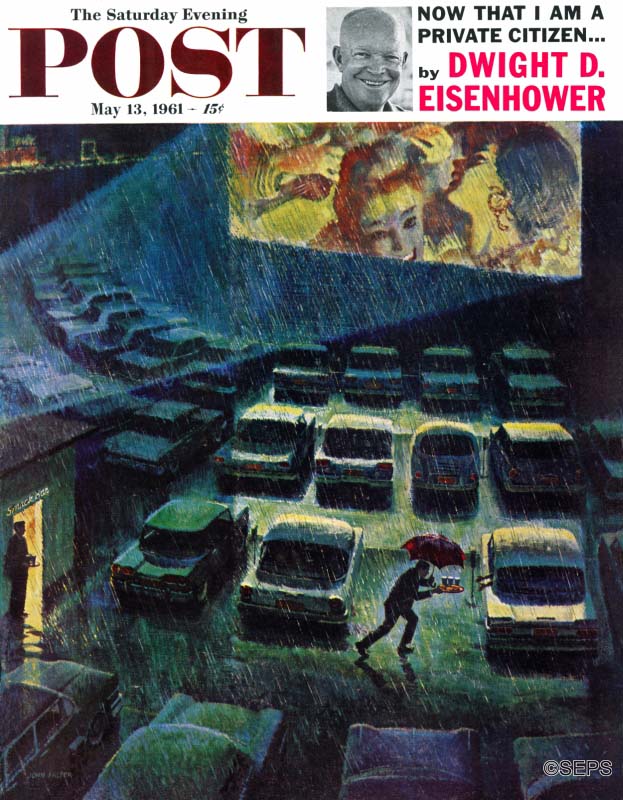 Some may think that drive-ins are a thing of the past, like the rainy scene depicted on this cover from John Falter, but like vinyl records, they’re actually making a comeback.

May Is National Salad Month

Look, it’s salad. No matter what creative ingredient you add to it — strawberries, eggs, grapes, chicken, M&Ms — it’s still a salad. Your kids aren’t going to be bugging you all week to make them that great salad you had once with that romaine lettuce instead of iceberg, throwing a tantrum on the floor until you give in. But yes, salads are good! And good for you (as long as you don’t fool yourself — all the heavy dressing isn’t always “healthy”).

We have recipes for a lot of different salads here at the Post, including Curtis Stone’s Green and Yellow Bean Salad and his Endive Salad with Stilton and Roasted Walnuts. And here are recipes for an Apple and Fennel Salad, a Mexican Spinach Salad, and a Pasta Salad with Tomatoes.

Actually, M&Ms in a salad might be pretty good.

There used to be special days to honor each branch of the military separately — Army, Navy, Air Force, Marines — but on August 21, 1949, the days were combined into one single holiday.

This is a Canadian federal holiday that marks the birthday of Queen Victoria, and has been celebrated since 1845.