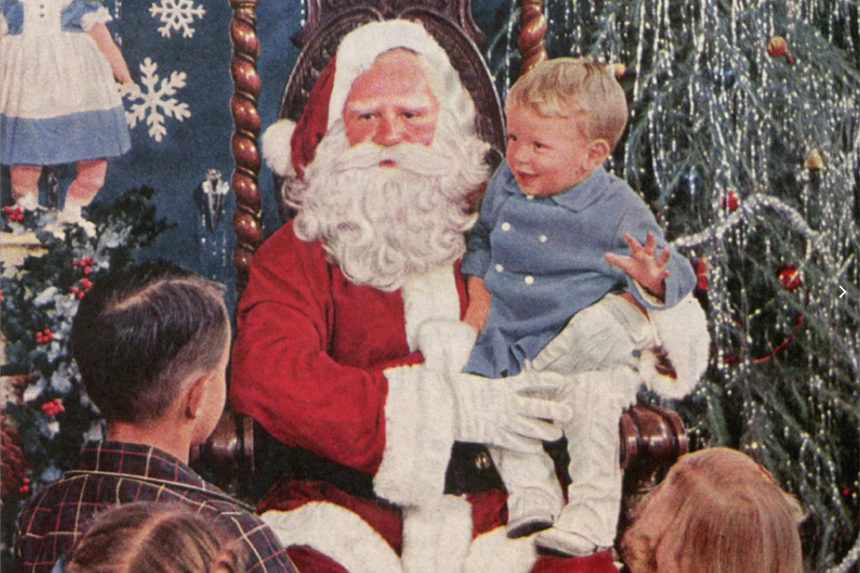 In 1951, Bill Strother was tired of running his small hotel in Virginia, and he wanted to pursue a career that would combine his love of performance and his desire to help others. He came up with an idea for a Christmas show.  When Miller & Rhoads Department Store placed a help wanted ad for a Santa, Strother instead pitched his show to them. It would convey to children the importance of helping others for the holidays.

They weren’t interested in a Christmas show about selflessness, but they still wanted Bill, who they thought would make a perfect Santa.

The executives at Miller & Rhoads offered him the job, but Bill didn’t want it. He countered with a ridiculously high sum of $1,000 a week, thinking they’d leave him alone. When they agreed to it, he decided he had no choice. The paycheck reportedly made him the highest-paid Santa of the era.

During his stint as Santa, Bill listened to the Christmas requests of more than 15,000 children. But he still believed the true meaning of Christmas could be found in giving rather than receiving, so Bill’s Santa shtick was unorthodox:

He has none of the old patter about “What do you want for Christmas?” In a softly sonorous voice he tells them of the true spirit of the season, reminding them of children less fortunate than themselves; and, in simple appeal directed to a child’s heart, explains the joys of giving and thinking of others. Two years ago a little girl was so overcome that she pulled out a loose tooth and gave it to him then and there.

Bill’s visits didn’t stop at the store; he also spent time at hospitals and orphanages, raising children’s spirits with stories of life at the North Pole.

Today, there is still a need for good Santas, and interested applicants can hone their craft at one of several Santa schools. The three-day course at Charles W. Howard Santa Claus School in Midland, Michigan will set you back $525 (if Mrs. Claus comes along, the fee is just north of $1,000). Classes include the history of St. Nick, reindeer habits, and Santa sign language. There’s even a breakout session for Mrs. Claus.

The school was founded in 1937 by the its namesake, Charles W. Howard, who was known for saying “He errs who thinks Santa enters through the chimney. Santa enters through the heart.” Howard played Santa for the Macy’s Thanksgiving Day Parade from 1948 to 1965. He opened his school to train more believable Claus impersonators after seeing too many quacks in cheap getups.

Unfortunately, a diploma from Santa school may not pay dividends; the going rate for Santas is $30-$75 an hour. But many Kris Kringle impersonators aren’t in it for the money, anyhow. Who wouldn’t want to be the most popular guy in the mall, even if just for a few weeks?

Even the highest paid Santa in 1951 wasn’t exactly raking in cash (after all, they only work one month a year). But Bill Strother maintained the spirit of Christmas all year long: “When he visited a sick child in the Los Angeles area, he cheered the boy by telling him, ‘You don’t have to wait until Christmas for Santy. Santa Claus lives all the time.’”